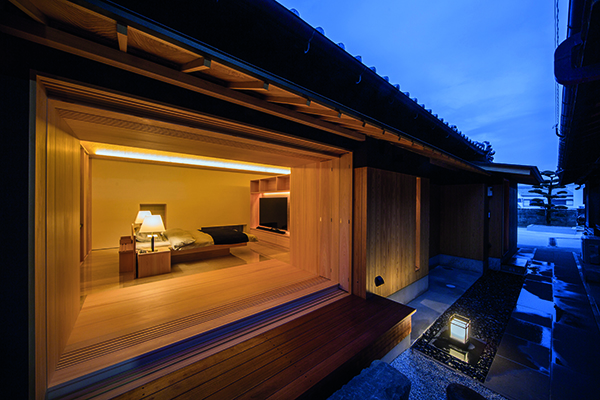 The brief for the project was initially born out of the client’s desire for private space to admire a stunning Japanese style painting featuring an exquisite weeping cherry tree in blossom lit by the moon light. This quickly evolved into an idea that the painting should form the centre of the whole house, not just a single room.

The single-storey wooden structure, which was built more than 40 years ago, was subsequently given a renovation of award-winning proportions.

At the end of 2018 Oukikyo was recognised at the Architecture MasterPrize Awards where it was awarded two accolades. The project was successful in the ‘Restoration and Renovation’ category and the ‘Residential’ category.

“It is an honour to be awarded the high quality and worldwide influential awards like Architecture MasterPrize. By seeing it by many people, my horizons will expand.”

The design period for the project ran from April 2017 to September 2017. Construction commenced a couple of months later and was concluded in the April.

While the original main structure of the house was kept unchanged, the west side of the house was made into a large, spacious, single room containing the living room/study and bedroom area. A storage unit between these two areas separates the room but does not close the space off fully.

The east side entrance had to be moved and became smaller. A foyer was thus created between the entrance and the main room, with a small foyer garden (Roji-Niwa). It was designed to provide the sense of anticipation before entering the suite. A sculpture by Todo Raon was placed in the middle of the foyer garden.

The painting by Hiroshi Senju that inspired the whole project is called ‘Yozakura Gekka’, or ‘Cherry Blossoms under the Moon’. As it symbolises spring and nature, its four seasons were introduced into the design. Summer is represented in ‘Asanoha Monyou’ (hemp leaf pattern) on the three-parted sliding doors. Autumn is pictured in the elegantly lacquered panel of the Byakudan finish, with ‘Momiji Monyou’ (maple leaf pattern) in scarlet and gold. Winter is expressed in ‘Shiki-Matsuba Monyou’ (pine-needle covering pattern) that was woven into the Nishizin silk that covers the curved ceiling. Cherry buds awake in winter and endure the cold until the spring blossom time. To complement the beauty of Yozakura Gekka, the winter essence was essential to the place.

Newly designed furniture uses hinoki cypress to give a refined impression with its delicate wood texture and natural finish. A marble stone floor is a modern element to blend with the traditional Japanese style. 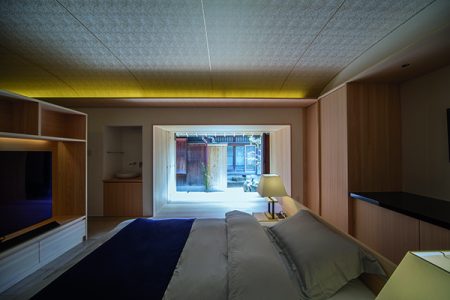