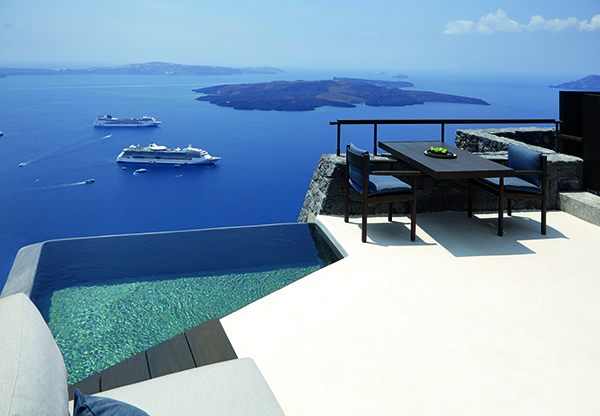 Vòra Villas has won the ‘Best Resort’ award at the AHEAD Europe Awards 2018. Up against tough competition from many other projects in the region, it was described by the judges as “small but perfectly formed,” with the award handed to K-Studio co-director, Konstantinos Karampatakis at a ceremony at Park Plaza in London.

Vòra Villas is a three room boutique hotel that clings to the edge of a volcano crater on the Greek Island of Santorini. Conceived in close collaboration with local hotelier Yiannis Bellonias, the design is a celebration of the inherent energy of the island, its architectural traditions and the intensity of the hotels crater-edge location.

The design brief for Vòra Villas, which was presented to designers K-Studio, asked them to design a small boutique hotel on a dramatic site edge. The client, a native of the island, had a vision and determination that drove the project from beginning to end, and gave K-Studio the opportunity to push the concept and its realisation to the very edge.

The steep inclination of the relatively small site called for innovative solutions to the challenges of circulation and layout, but also allowed for spectacular views and vistas at every turn. A sharp-edged channel of grey volcanic rock paves the way down from the entrance point at the top of the site, twisting you and ricocheting you from angled wall to angled wall, slicing a soft white mass into three separate and unique villas. The villas are neat, compact and dynamic, taking on a sculptured form when juxtaposed against the straight edge of the volcanic rock path and retaining walls.

Traditionally the houses in such villages are small, cramped and overlooked. To provide a high-end experience, K-Studio wanted to make space for the guests and give them as much privacy as they could. The renovation of the original cave villa retains its characteristic layout of three rooms that move in succession deeper into the rock. Literally carved out of the mountain the curves of the vaulted ceilings soften the shadows, removing sharp lines and blending it into a darker space towards the back of the plan. Views and light are exploited in the façade but the cooler, darker space further invites guests to retreat from the oppressive heat outside. This villa sits above two newly constructed villas which slice its linear plan in half, stacking one on top of the other so that each villa features an upper level of living space and a lower level of bedroom space. This arrangement allows for light and view to dominate in all areas and with each villa carefully angled to take in the sunset from a unique viewpoint guests’ privacy is also maintained.

The two driving forces behind the concept were the volcanic rock and traditional local vernacular. K-Studio wanted to reveal and control the drama and thrill of the site whilst securing guests with comfort, privacy and a relaxed lifestyle. The designers worked with natural volcanic rock to cut routes through the site and to retain its boundaries and with charred wood and blackened gun-metal to highlight the power of nature within the villas. These where juxtaposed with the soft curve of the traditional ‘Aspa’ render and white lime wash finish. K-Studio then introduced lighter stone finishes and naturally pale linens to bring a balancing sense of cool and calm interiors.

Guests at Vòra Villas will experience a series of carefully choreographed contrasts – the wide open exposure to the sun and views against the cool darkness of the cave rock; black volcanic rock and burned finishes against cool white curved and calming pale textures – dark with light, sharp with soft, drama with total relaxations. The hotel is intense and complex yet laid out with clarity and designed with authenticity. 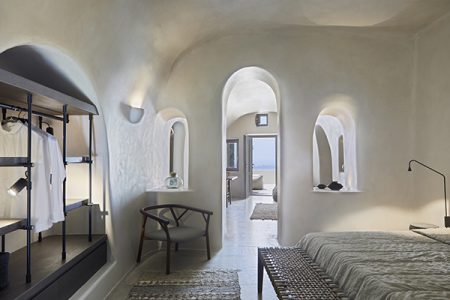