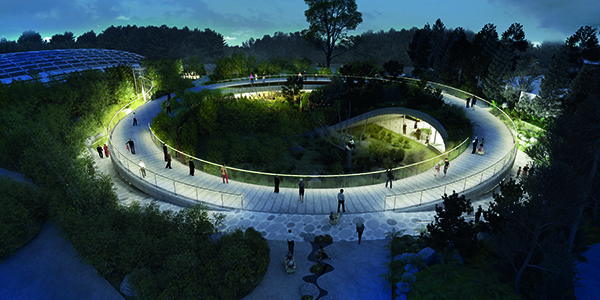 A new Panda House is being constructed at Copenhagen Zoo to accommodate two bears who are being relocated from Chengdu, China. Copenhagen Zoo – one of the oldest in Europe – asked Danish architect Bjarke Ingels’ firm BIG, Schønherr Landscape Architects and consultancy MOE to create the home for the new arrivals.

Totalling 2,450 square metres, the area will provide a variety of environmental and separate spaces for the male and female pandas, as they should be kept apart except during their brief mating season. The new habitat will form the freest and most naturalistic possible environment for their lives and relationship with each other, providing the freedom to roam about the ideal conditions to mate – one of the major challenges facing pandas from becoming endangered.

The design of the new panda house is a circular shape, formed by the surrounding and existing facilities at the intersection of multiple walkways within the zoo. A bamboo forest will cover one side of the enclosure and a more dense ‘misty’ forest will take up the other – both designed to recreate the panda’s habitat in the wild. Ramps will circle the Panda House so visitors can move from viewing the indoor spaces on the ground floor to the open air areas above with additional pathways passing through planted areas linking to other parts of the zoo. The ground floor will also include a restaurant from which visitors can watch the pandas, as well as elephants in their Norman Foster-designed enclosure opposite. BIG Architects have designed the Panda House to feel as if humans are visitors in the Panda’s home, rather than the Panda’s being exotic guests from far away.

Commenting on the work, Bjarke Ingels, Founding Partner at BIG said: “Architecture is like portraiture; to design a home for someone is like capturing their essence, their character and personality in built form. In the case of the two great pandas, their unique solitary nature requires two similar but separate habitats – one for him and one for her. The habitat we are creating is formed like a giant yin and yang symbol, two halves: the male and the female completing each other to form a single circular whole. The curvy lines are undulating in sections to create the necessary separation between him and her, as well as between them and us. Located at the heart of the park, we have designed the entire enclosure so it is accessible from 360 degrees, turning the two pandas into the new rotation point for Copenhagen Zoo.”

Founded in 1859, Copenhagen Zoo is one of the oldest zoos in Europe and is a member of EAZA. It comprises 11 hectares and is located in the municipality of Frederiksberg, sandwiched between the parks of Frederiksberg Gardens and Søndermarken. The zoo was founded by the ornithologist Niels Kjaerbølling who was given the summer garden of “Prinsess Vihelmines Have” (the garden of Princess Vihelmine) by the chief directorate of Copenhagen. Starting in the early 1980s, Copenhagen Zoon has been undergoing renovations aimed at replacing cages with enclosures which recreate animals’ natural environments, giving a better life to the animals and a more realistic experience to visitors.

The pandas are relocating to Copenhagen as a gesture of goodwill from the Chinese government following the Queen of Denmark’s visit to the country in 2014. Fundraising commitments of between 125 and 150 million kroner was secured for the construction of BIG’s panda enclosure, which is due to complete in April 2019. 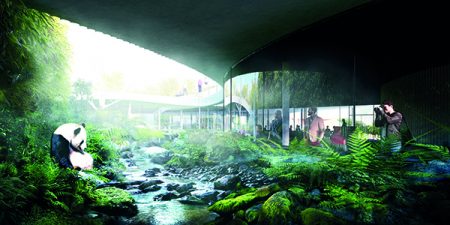