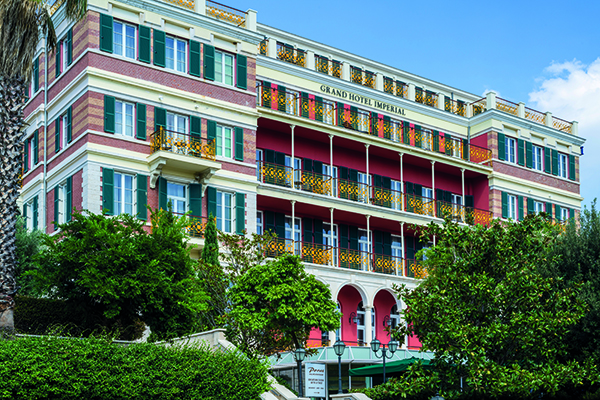 Goddard Littlefair has completed the restoration of Hilton Imperial Dubrovnik, re-injecting golden age glamour into one of Europe’s most beautiful hotels to appeal to today’s cosmopolitan, sophisticated traveller.
Hilton Imperial Dubrovnik, situated just above Dubrovnik old town, was originally built in the 1890s and went on to serve the great Mediterranean cruise liners docking in the city in the early 20th century. Then called ‘The Grand Hotel Imperial,’ with a French Riviera feel and the glamorous cachet of an international clientele, the hotel was a roaring success for many decades, but, during the Yugoslav war, it was shelled and then used to house refugees. The hotel was subsequently brought back to active life in 2005.
Goddard Littlefair was initially commissioned towards the end of 2016 for a phased set of redesign works, with the first two now completed and including the reception and lobby, The Lobby Lounge, The Imperial Bar, The Executive Lounge, all connecting and guest-room corridors and all of the hotel’s 149 standard and executive rooms and 9 suites.

Reception
Guests enter via a metal revolving door into a stunning, double-height reception, with tall, arched windows and cool ceramic flooring in a bespoke two-tone diamond pattern, inspired by the old stone streets of the city.
The visitor’s eye is immediately taken by a spectacular central chandelier, made up of eleven, sculptural, globe-shaped and antiqued brass pendant lights, hanging from chains in rows of three on antiqued brass rods. Each individual pendant light within the chandelier houses seven fluted, ribbed glass tubes, concealing the bulbs, with the ribbed glass treatment used matching seven bespoke vertical wall lights in the reception’s waiting area. The feature light was designed by Jana Novakovic, Interior Designer at Goddard Littlefair and was manufactured by Croatian lighting company Dekor, who worked on most of the lighting on the project.
The ceilings in the reception feature newly-instated decorative mouldings, whilst the walls are clad in inset dove-grey panels at the upper level, with feature areas of moulded timber panelling at ground floor level, located around and behind the reception desk and also enclosing the lobby waiting area opposite, where huge-scale arched windows – technically at first floor level – flood the space with natural light, with glare lessened by transparent sheer curtain panels and off-white blinds with a striking blue trim at the top of the windows.

Corridor leading to Lounge and Bar
Directly opposite the main entrance is a dramatic archway leading to the ground floor of the hotel. The arch is internally-clad in panels of antiqued mirroring, which are also used for two window spaces on the internal wall of the reception. The arch leads up a ten-step stair, with a curving brass handrail, to the main circulation corridor, with the eye drawn down the corridor by seven further pendant lights. To the right of the corridor are the main public areas, whilst to the left are a stair lobby down to the lower-ground floor, where a ballroom, suite of meeting rooms and the hotel’s existing restaurant, Porat are located, all forming part of a phase three 2019/2020 redesign by Goddard Littlefair.

The Lobby Lounge and The Imperial Bar
Leading off from the right of the ground floor corridor and instantly visible through a series of galleried archways are the scheme’s stunning new public spaces – The Lobby Lounge and The Imperial Bar – followed by the members-only Executive Lounge.
The ceiling in The Lobby Lounge area is painted white with new added decorative mouldings. The right-side wall is painted a pale shade of blue, as are the inner arches of the French doors that line the wall and open out on the terrace.

The spaces feature three zoned seating arrangements, demarcated by individual rugs in blues and whites with a touch of coral, in a take on an antique Persian rug, set on top of timber chevron flooring that runs through the entire space. Each seating zone features a table, with a Carrara marble top and either fine brass legs or a more substantial dark-timber pedestal, and each has a different seating arrangement.
The Imperial Bar has a pronounced deco feel, with its shapes inspired by the arched windows along the outside of the space. It has a glass lightbox treatment for the rear bar wall, featuring backlit ribbed glass set within a brass framework and the lightbox area is contrasted with a bespoke-designed blue wallpaper to the sides and above, which continues round the upper section of the walls in the bar space. The lower wall treatment throughout the bar space features white timber panelling, with the same raised pattern as for the dark timber panelling in reception. The bar itself is curved, with a Carrara marble top and a patterned, mosaic bar front, also in Carrara marble with inset brass detailing. 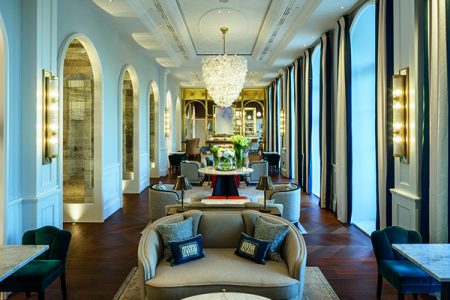 The Imperial Lounge with The Imperial Bar at the far end, beyond the dividing screen
Image Credit – Gareth Gardner

Guestrooms and Corridors
Linking corridors are inset-carpets with timber borders in light oak and carpet runners, with a bordered bespoke design in a subtle colourway running from greys to varying shades of blue.
The design feel of all the rooms is light and fresh, with classical clean lines and a refined and elegant colour palette of blues and silvers, plus the sparing use of pale pinks. Each room features a bespoke Axminster rug from Brinton’s, with two used for the suites. The rugs in the suites are in a pattern that suggests the Middle East, with a whipped-edge border and the colour palette inverted from one to the other in blues, turquoises and ivories, with a touch of gold, whilst the standard room rugs have a more abstract, floral pattern.
In the guestrooms hang a combination of prints by Raul Perčič and Branka Ridicki, sourced by art consultants ARTIQ. Hanging squarely above the bed, Branka’s paintings imagine townscapes in abstract composition and were selected for their success in capturing the feeling of Dubrovnik’s winding streets and undulating roof-scapes.
The beds feature full-height panelled headboards with the panels arranged in a single ‘bird’s beak’ pattern, with a blue-painted frame and upholstered in a soft gold silk-linen. The bedside tables alongside are oval-shaped, with a small inset drawer and open shelf, in dark-stained timber with a timber top and drawer, along a laminate body in grey with a linen texture and timber plinth.
Circular dining tables/desks are in timber with a bell-shaped solid wood pedestal and additional gilding at the pedestal neck. Furniture in the rooms also includes an armchair and, depending on the room, a mix of other items including a stool, chaise or bench.
Curtains are a mix of white sheers and a silver-grey material, with a very slight sheen to the material to aid reflection. They hang the full length of the wall behind the ceiling soffit so that the header area is disguised. Quite a lot of the rooms also have balconies with window-swing doors to the front-facing rooms.
The Imperial Suite contains a living room, dining room, bedroom and bathroom and has great views out from the front second storey of the hotel, overlooking the town’s famous old fort and the sea.
For this and other suites, the design treatment links to the standard rooms, with subtle differences including a marble-print fabric for the wall-lights and headboards with a padded chevron treatment in light blue faux leather and a brass trim between the upholstery and the framing timber surround.
All the suites also have sofas, upholstered in a very light off-white linen-type material with arms that splay outwards and a long and loose back cushion. Bedroom armchairs are curved with vertical piping detail to the interior of the back panel that looks like ribbing and are upholstered in a grey woven material, whilst a rectangular ottoman features turquoise faux leather top and fabric sides that match the textile used for the armchair. 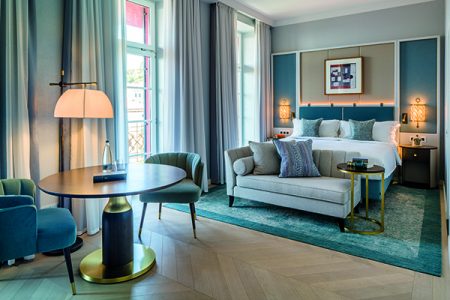