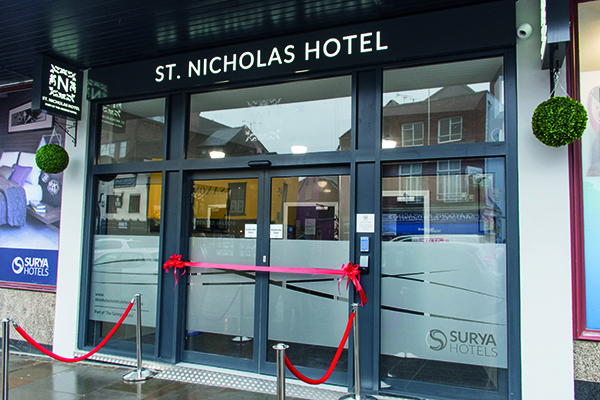 St Nicholas Hotel at The George

The recent opening of St Nicholas Hotel at The George marks the completion of phase one of a £10m regeneration project, which will also see Colchester’s historic George Hotel restored to its former glory.

In January 2017, Harwich-based developer Flying Trade Group, behind the Surya Hotels brand, announced plans to refurbish and expand the George Hotel site, including a complete refurbishment of the 47 bedroom George Hotel and plans to convert nearby St Nicholas House into an affiliated hotel. Just across the road from The George Hotel, St Nicholas Hotel is now a stylish extension of The George, doubling the rooms available to 91, with the creation of 44 modern, executive double rooms – including family rooms and spacious balcony suites.

A stylish extension of the historic George, St Nicholas Hotel is home to 44 modern, executive double rooms – including family rooms and spacious balcony suites, some with stunning views towards Colchester castle.

Step inside and the accent is on modern comfort, spacious light-ﬁlled bedrooms with all the amenities required for an enjoyable stay.

With historic Colchester – Britain’s oldest recorded town – on its doorstep, St Nicholas Hotel is the perfect base to explore the town’s cobbled streets, shops, cafes and bars as well as Colchester’s famous Roman Castle, a few minutes’ walk away.

The Grade II* listed George Hotel, a hostelry with more than 500 years of history, is in need of modernisation, however, renovation work requires the utmost care to protect the hotel’s rich history and its status as a ‘particularly important building of more than special interest’. Flying Trade is conducting archaeological and historical surveys across the hotel, which features elements of woodwork and beams dating back more than 700 years.

Flying Trade CEO Suki Dulai said: “We are delighted to have completed the first phase of our regeneration of The George Hotel and St Nicholas House.

“We are pleased to have finally brought life back to St Nicholas House with the creation of 44 impressive ensuite bedrooms and suites right in the heart of Colchester. As we move onto the second phase of our project, the restoration of The George itself, we have to ensure that whilst we bring the hotel back up to date with modern facilities, that we don’t lose the historical atmosphere of the building. Our aim is to keep the charm and ambience of the hotel, while delivery consistent standards, good food and accommodation.
“We want to expose the history within The George, so customers can feel and appreciate the warmth and depth of its past, while also enjoying the comforts and convenience of modern day life, whether that be Wi-Fi or Cappuccino.”

From January 2019, Surya Hotels will be temporarily closing different sections of The George for its full refurbishment.

History resonates throughout the historic coaching inn which is home to a stylish brasserie with excellent English a la carte dishes and daily specials. The extensive medieval cellars, which are to be exposed and preserved behind glass, feature the ruins of an ancient Roman house – destruction debris which is a chilling reminder of Queen Boudicca’s rampage that burned Roman Colchester to the ground in AD60.

FTG’s Surya Hotels portfolio features 12 hotels across the UK, including The George, Colchester, Great Hallingbury Manor and the Kingscliff Hotels in Essex, the Duke’s Head in Norfolk and The Mill Hotel in Suffolk. It also owns the Dragonfly hotel portfolio, including the Colchester site. The majority of its characterful hotels are boutique in style, meanwhile its Dragonfly portfolio – the group’s stylish, affordable quality hotel range – has recently undergone a £1m refurbishment across the group, including the launch of a new dining concept, Barley & Graze, as well as serving fresh, barista coffee on site as part of a collaboration with leading coffee merchants Paddy & Scott’s.

Many Surya Hotels are set amongst East Anglia’s top tourist hotspots, from quaint market towns to historic high streets, all ideal for exploring the surrounding villages, countryside and coast. Two further Surya Hotels – The Hog’s Back Hotel & Spa, Farnham and The Thatcher’s, Guildford – are located in Surrey, providing the perfect base to explore some of the UK’s leading attractions, including Ascot, Thorpe Park, Legoland and Chessington World of Adventures. 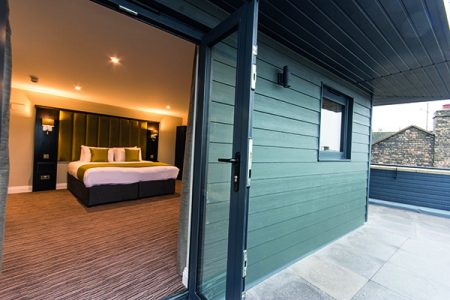 Hadleigh Glass specialises in the manufacture and installation of all of Smarts and AL-UK Aluminium Window and Door systems.

Hadleigh Glass has been in operation for over 20 years and has worked on a number of prestigious projects. Regular customers for the company include Barnes Construction, R.G. Carter and Storm Group. Hadleigh Glass completed a 250 window installation at Oyster House, an office complex in Colchester, and a window installation for Flying Trade at the Hoggs Back Hotel in Surrey

“We manufacture and install leading Aluminium Window and Door System which gives us full control of projects and allows us to meet deadlines. We have managed to develop a reliable service in an area that many companies find difficult.”

“We have a long standing relationship with Flying Trade and were grateful to be given the opportunity to carry out the installation. The building is central in Colchester and very high profile. A lot of time has been taken to specify products with the correct sight lines to be sympathetic to the original frames that were being replaced. As manufactures of the Smarts window system we were able to showcase our products in a high profile building.”