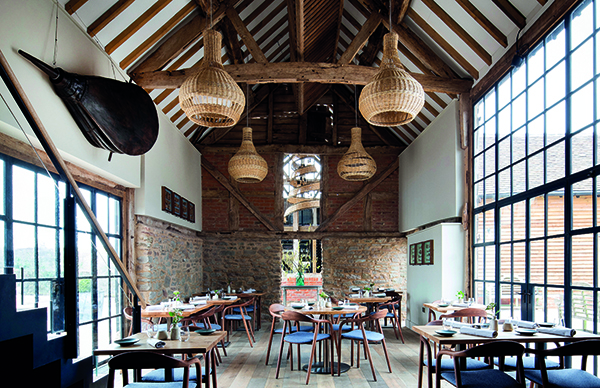 Pensons is a new restaurant set in the stunning grounds of the Netherwood Estate and is a partnership between Lee Westcott and Peta Darnley. Nestled on the picturesque borders of Herefordshire and Worcestershire, the new venture is Lee’s first move outside of London and is inspired by the beautiful countryside and abundance of quality produce available locally.

The Netherwood Estate is a historic agricultural family farm set within 1200 acres of land, dating back to before the Doomsday Book. Having been traditionally managed as a farming enterprise, over the last eight years it has diversified into many different areas including hospitality.

The aim of Pensons is to cook and east as seasonally, locally and as sustainably as possible. Lee’s sourcing ethos is driven by his respect for quality fresh produce. This opportunity to farm, forage and grow some of his own ingredients on the estate means that he and his team can truly evolve seasonal menus that allow a true encapsulation of the farm to table concept. The range, breadth and quality of produce are incredibly exciting – literally from Estate to Plate – as well as being a platform to showcase the regions rich culinary offering.

Pensons is housed in former derelict farm buildings that range in age from the 15th century onwards. Alex Coppock from Communion Design worked on the architecture of Pensons alongside main contractors Fletcher Developments.

Speaking to Premier Hospitality magazine, Alex said: “There was quite an extended thinking process about what to do with the barns and then a decision was made to pursue a restaurant. We then had to discuss how we would use the existing buildings and extend those existing buildings in order to fulfil the brief. Peta had a very strong vision about what she wanted to bring to the site and I tend to believe in a conversational approach to projects so we both had ideas, brought them to the table, agreed certain things and from that process the design developed. What we have looked to do is re-use the existing building in order to give a strong sense of place for those eating at the restaurant.”

The site has been entirely rejuvenated and restored, preserving intricate original features and re-using as many of the original materials as possible. The former manager used for feeding hay to cattle is being reused as a lighting rig, the brick threshing floor has been repaired and beautifully weathered elm and oak boarding reinstated.

The 46-cover restaurant comprises of a large open dining space, with a kitchen at one end and light flooding in through double-aspect imposing, industrial floor-to-ceiling windows. The open kitchen is situated off the main dining area and there is an upstairs private dining room for parties of up to 14. The restaurant is set around a sheltered courtyard where guests will be able to have an aperitif outside when the weather allows, or which can be used as a venue for larger events.

The interiors, designed by Peta Darnley, accentuate the natural light that floods into the building through the double-height former wagon-openings. The decoration is deliberately understated to allow the natural beauty of the many varied textures of the building shine. The natural textures and colours of the wood, brick and stone are complemented by a palette of slate blue, soft grey and ecru. The team have worked with local artisans for furnishings and bespoke pieces. Fabrics have been made in the weaving mill on the estate itself, by Netherwood Textiles; a collaboration with Daniel Harris, founder of London Cloth Company. Similarly, renowned basket-maker and artist Jenny Crip has created unique lampshades made form willow harvested on the estate and around Herefordshire.

Alex added: “When we work on public buildings like Pensons, restaurants and churches we know that we are going to have an impact on a community of people. Hereford is a hidden gem and we love it. I feel like this project is important for Herefordshire in terms of making what is beautiful about Herefordshire and bringing it to a more national stage. I believe this is going to be a high profile project for the client and will help Hereford in terms of its tourist offering in that area. For us, it has been a relatively large and complex project that we have loved getting involved with; delivering something that is about an overall space.”