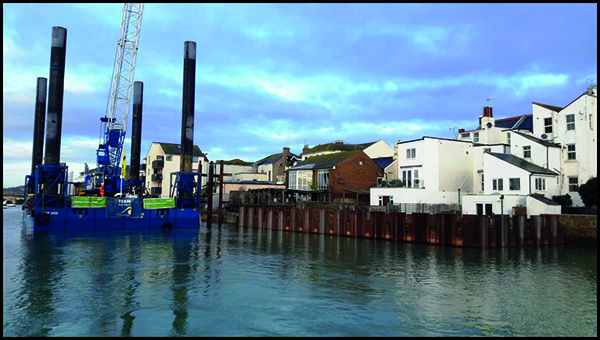 The risk of flooding to coastal settlements around the UK is high and increasing due to sea-level rise and an increase in extreme rainfall events from the effects of climate change. The Environment Agency is investing £2.6 billion in projects to manage flood and coastal erosion in the six years to 2021, including £200 million in 2018/19. It has carried out extensive modelling to determine the likely extent and range of potential flood events over the next 100 years.

The current flood defences in Adur estuary do not provide a high enough level of protection and in places are in poor condition. This leaves Shoreham-by-Sea, Lancing and the surrounding areas at risk of flooding. The Environment Agency has been developing a major improvement scheme called the Shoreham Adur Tidal Walls to provide protection for extreme events with 0.33% (1-in-300-year) probability of occurring in 1 year, allowing for 50 years of sea-level rise.

Speaking to Premier Engineering magazine, Project Manager, Keely Mowatt said: “The scheme itself is taking an adaptive approach to climate change so the defences themselves are constructed to last for 100 years but the height of them only takes into account 50 years of sea level rise. The plan is that in year 50 (2067) we will go back and reassess what is happening with climate change and decide what the best option is. At the moment the two options are that we either increase the height of the walls or go along the lines of a tidal barrier, but that would be dependent on cost at that time.”

The scheme will reduce the risk of flooding to over 2,300 residential properties and 169 commercial properties by significantly improving the standard of existing tidal defences in Shoreham-by-Sea.

The scheme was separated into 10 reaches, or lengths, of the estuarine bank (3 on the east bank and 7 on the west bank) with the design of the defences varying between reaches. The environment Agency held consultation events in 2014 and 2015 to gain feedback on the designs and they incorporated the feedback into the detailed designs.

The £32 million project was partnership funded, with a £23.8 million contribution from government attracting partnership contributions from West Sussex Council, Coast to Capital LEP and some private developers through Adur District Council. Work on the scheme began with detailed design in 2014, with construction commencing in 2016. The project was then completed in December 2018.

Keely added: “I have been involved with the project since it went out to tender for the detailed designs in 2014 so I have seen it go from drawings on paper, to throwing ideas around and making it a nice environment for the residents. To see how it looks now to when we first started and to see peoples reaction to the finished product and to hear the feedback, it feels like people value their local environment more because they have this nice new infrastructure to support it.”