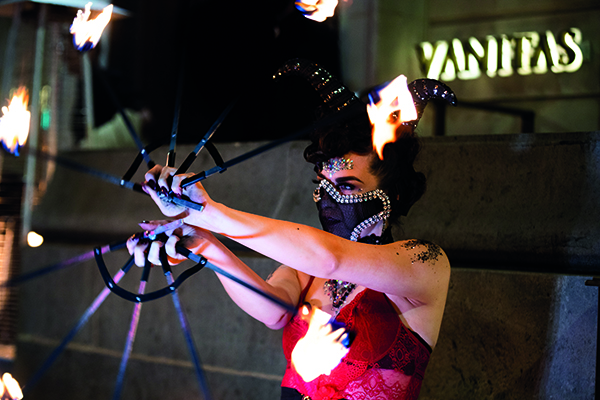 A glamorous new late-night bar has officially opened its doors in Manchester after a grand opening full of entertainment.

Following the success of the award-winning Masons Restaurant Bar, Manchester Hall announced the opening of Vanitas as they work towards their mission to become the most sought-after social destination in the city of Manchester.

Vanitas is located in Manchester Hall’s stunning vaulted memorial hall, capitalising on its rich and varied history. Drawing on the 17th century art genre, the name ‘Vanitas’ dwells on the symbolic themes around the inevitability of death and the transience and variety of early pleasures and achievements. The team behind Vanitas decided to put a positive twist on history, focusing on celebrating and enjoying life.

The interior of Vanitas reflects the mysterious nature of the unique building and visitors can expect an array of special features, including a Vanitas branded rose petal flower and a VIP champagne lounge.

Vanitas is a brand new venture for Manchester Hall owner Stephen Cliff, who is responsible for its renovation after developing a great affection for and recognising the great potential for the historic building. Speaking to Premier Hospitality, he outlined the thinking behind Vanitas and gave a guide around the space:

“The main part of the hall is where Vanitas is now. The hall was originally based upon King Solomon’s temple so there are a number of columns that are synonymous with the Freemasons movement and it’s a very grand hall in the centre of the building. Our mind set behind Vanitas really came about by understanding what the Freemasons used to do within the building in its heyday.

“In one of the Freemason ceremonies they actually use skull and crossbones. When I realised they were doing this, I did a bit of research into the reasons behind it and as part of that came across the name Vanitas. Vanitas is basically a historic painting, which always has within it a skull but also vanity items of its time. The painting represents vanity because everyone likes the idea of vanity whilst they are alive but we’re all the same in the end because we all die.

“Vanitas is on a number of levels. The main part is at ground level and that’s the main hall. The main hall has the bar, booth seating and the DJ booth. Just off that we have a smaller room with a seating capacity of 30. We call it The Snug and it’s a getaway from the main hall to chill out.

DMS Electrical Ltd provided the electrical installation for the project. Working with local wholesalers the company supplied and installed the lighting fixtures and electrical fittings. It was important that the electrics were a seamless part of the build yet highlight some of the fantastic features the venue has to offer. DMS Electrical Managing Director Paul Foster commented:

“Working in the electrical industry can mean you find yourself involved in unique and exciting projects. Being involved in such a high profile project is something we are proud of. It’s a spectacular venue and our involvement in this project meant we were able to showcase our versatility and work to the client’s timescale whilst providing our knowledge and expertise in the latest lighting and fittings options.

“Being a business that is based in the north we are able to say our staff who are all based in and around this area worked on this project and we are sure will enjoy seeing other people enjoy their work in their leisure time.”

The late night bar will be headed up by General Manager of Manchester Hall, Ritchie Bagnall, who commented:

“My team and I are thrilled to be part of such a huge and exciting project that will be bringing a new nightlife space to the heart of Manchester in such an iconic building.

“The space is like no other in Manchester and the music and entertainment that we will be bringing to Vanitas is what has been missing in Manchester for some time now. We have some of the North West’s very best DJ’s, live musicians and performers ready to take Vanitas by storm! We will be introducing new concepts and theatrical entertainment that sees the overall vision flow not only through the building and tis décor, but also through its artists and performers.”

Vanitas is located on Bridge Street in the heart of Manchester. To find out more, please visit www.vanitasbar.co.uk. 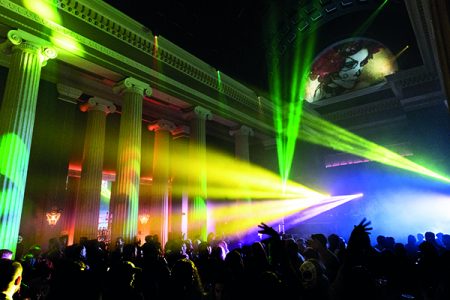 Manchester Hall is an iconic Grade II listed building and former Freemasons Hall, which underwent a multi-million pound refurbishment after remaining untouched for decades. A team of experts worked Cue Marketing and Ikon Furniture to transform the building for the modern world, while still preserving its historic features and giving nods to the history of the iconic building in the interiors.

Manchester Hall has become one of the city’s premier venues for weddings, conferences, events, parties, fashion shoots, dining and much more. The next venture for Manchester Hall is the upcoming launch of the rooftop terrace event space and 8 luxury bedrooms within the building.