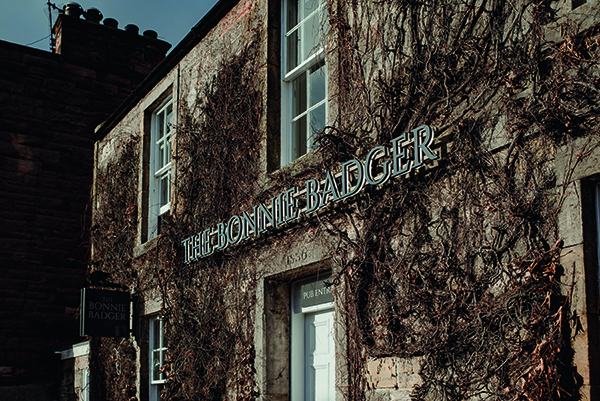 In the heart of East Lothian’s coastal village of Gullane, The Bonnie Badger is a stylish, welcoming new hotel with a pub, restaurant, rooms and garden created by husband and wife team Tom and Michaela Kitchin and the team behind the Kitchin group.

The charming site of The Bonnie Badger has always played an important part in village life, dating back to 1836 when it first opened as an Inn. After an extensive renovation and refurbishment, undertaken by the Kitchin family and Burns Design, The Bonnie Badger opened its doors in December 2018.

Speaking to Premier Hospitality magazine about the work, Stephen Paterson from Burns Design said: “The brief really did evolve with this project. At the heart, was to use the existing building and structure in the most sympathetic and charming way possible. The project is very close to the Kitchin family’s heart and it had to be designed in a way that felt as though you were being invited into a personal space, hence a slightly eclectic mix of various styles, colours and design, which to be created had to be led by Michaela Kitchin. If this hadn’t been the case, the passion behind it would not be felt in the end result.”

The hotel has undertaken a significant transformation, restoring and displaying many of the building’s original charm and features. The main house proudly expresses a genuine home away from home ethos where guests instantly connect with its charming and beautifully reinstated décor.

“It has been a really fun journey and a dream project in many ways,” Michaela Kitchin explained. “We were familiar with the building from visiting the area for years, but we felt that the old hotel was in a desperate need for some love and TLC. The building itself had such a good vibe about it but the decor and layout didn’t quite work for us. It was essential to try and bring back as many of the building’s original features as possible and pair that up with a colour palette true to this beautiful region we’re in,” Michaela continued.

The dining room at The Bonnie Badger – The Stables – features a truly impressive ceiling showcasing the original beams of the old horse stable building dating back to the early days of the Inn and a grand fireplace towers over the dining room as a beautiful centrepiece. The original sand stone walls have been brought back to life and have been carefully restored giving the room a great character in a blend of classic panelling and stunning designer lighting, showcasing some beautiful design elements.

Stephen added: “When visiting the site early on, a storage area was found off of the staff flat, which we all instantly wanted to open up and expose to the space below. This created a double height space which then naturally became the main dining room.

“The kitchen also doubled in size and moved slightly so it is now the heart of the building.”

The Bonnie Badger Hotel features 14 individually designed en-suite bedrooms, located in the main house and over two cottages at the rear of the garden. The hotel also boasts a pub which has been beautifully restored having previously served as the main dining room over the years. In addition to the above, The Bonnie Badger has introduced a stylish garden room and a Private Dining area that can host up to 22 diners in an exclusive setting, adjacent to the back garden.”

The focal point of the hotel garden hosts an impressive outdoor stone fireplace. During the good weather this is accompanied with an outdoor bar and kitchen showcasing the Green Eggs and Utopia.

Using only seasonal, local produce and an impressive display of artisan beers and wine selection The Stables menu offers a modern take on pub classics in line with Chef Tom Kitchin’s ‘From Nature to Plate’ philosophy which has become synonymous with the groups other restaurants in Edinburgh. “The first sketch layouts were in April 2018,” said Stephen. “It then went like a whirlwind and opened in December 2018. Since the opening, feedback has been positive with numerous comments on the interior, which can only make you proud to be involved.”

Michaela added: “We’re incredibly proud of the entire team who has worked on this project and thrilled to now be showcasing our passion for great food and service in beautiful surroundings. We have some really brilliant staff at The Bonnie Badger of which many have come up through the company. It’s a really exciting time for everyone.” 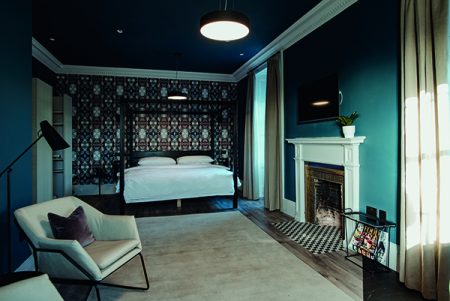