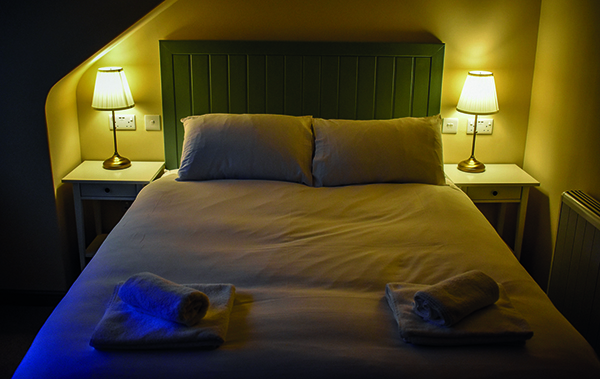 The Slate Caverns in Snowdonia, North Wales, continues to add to its growing portfolio of adventure experiences with the launch of a unique slate mountain hotel, which was originally a historic 19th century mountain home.
Designed by Smith & Brooke Architects, the 24-bedroom ‘Slate Mountain Lodge’ will serve guests visiting the Slate Caverns heritage and adventure hub in North Wales, home to some of the UK’s most popular adventure experiences, including the Slate Mountain Adventure and Llechwedd Deep Mine tours, Zip World Titan & Caverns, Bounce Below and the Antur Stiniog downhill mountain bike trails. Over a quarter of a million people visit the site every year.

The restored mountain lodge, originally called Plas Weunydd, played a significant part in Welsh history. For over 150 years it was home to the Greaves family who founded the mine at Llechwedd in the 1830s.
The house was built in 1860 and was extended in 1983, by which time it was being used as offices for the quarry. The Board, including the chairman Alistair Altham and David Williams-Ellis, together with the managing director Michael Bewick, decided to convert the building into a hotel a couple of years ago. Plas Weunydd was, incidentally, last lived in by the grandparents of David Williams-Ellis and his sisters, one of whom is married to Michael Brooke of Smith & Brooke Architects.

Its elevated position commands spectacular views across the historic Llechwedd site – once one of the busiest mines in the world – and the Moelwyn mountain range beyond.

Michael Brooke of Smith & Brooke Architects said: “The contract to carry out the works to the building was won by RL Davies, contractors in Conwy, who have worked tirelessly with great efficiency to completion. They have been responsible for a number of award winning buildings in North Wales.”

“Our beautiful new hotel is part of a £1.5 million investment programme which got underway with the launch of our luxury glamping lodges last spring.

“The development has been a particularly exciting project for us because of its very pertinent place in our history. The Greaves family lived at the lodge until 1970s and the building was subsequently used as offices for the mine’s managers.

“To bring back to life a building which played such a significant part in Welsh history is wonderful thing, it adds a very authentic extra dimension to the visitor experience.”
Doors opened to the hotel’s first guests in the first week of January 2019, but every room is already fully booked out for the rest of the year. An engineering firm engaged to carry out maintenance on Llechwedd’s hydroelectricity infrastructure will stay there until January 2020.

The hotel will have a public launch in spring 2020, after a refresh to develop it to four-star status. Bookings will go live later in 2019.

The Slate Mountain Lodge will be a four-star rated hotel with wedding and events facilities. A smart restaurant and bar will showcase local produce, and the hotel’s fixtures and furnishings will have a distinctly Welsh feel.
Already employing a team of six, the hotel will generate 23 new jobs when it opens to the public. The £1.5 million development has been part-funded by the Welsh Government.

The four and five person glamping lodges were booked at 100% capacity during their first operating summer, and bookings are now being taken for the 2019 season.

JW Greaves has been quarrying in Snowdonia since 1836 – over 180 years. The company was founded by a 29-year old John Whitehead Greaves after he failed to take a transatlantic passage from Caernarfon to start a new life in Canada. A handful of generations later, the caverns and mine site is still owned and operated by his descendants.