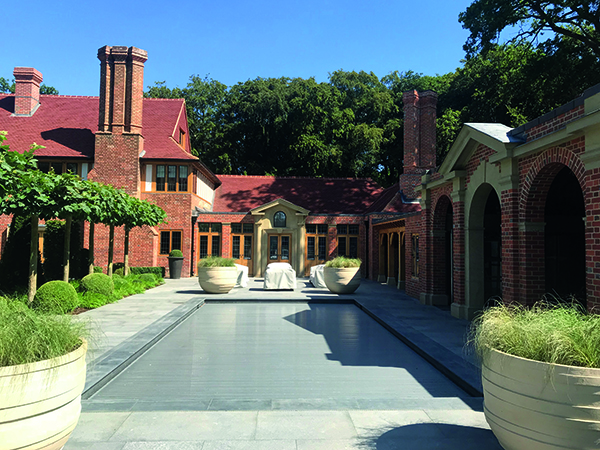 Jonathan Lees spoke to Premier Construction Magazine about the project.

How did you get involved with the project?
“The client first phoned us, hearing about our previous work and reputation, whilst they were in the process of buying the house. The house was originally designed in the Arts and Crafts movement by Maberley Smith, a contemporary of Edwin Lutyens, who has significantly influenced the progression of our work and the belief of Art in building.
“We met with the client to review the existing structure. We were originally asked to design a garage extension and that plan soon evolved over a short period of time and we ended up developing plans to completely re-design the north elevation, add wings, an orangery, a summerhouse, stables and gatehouse along with extensive works to the gardens. It was a process that lasted 4 years, and is still continuing in parts as we have yet to finish our masterplan for the site.”

What was the original brief like?
“As for the brief, the client had a very keen eye for design and they knew how they wanted the spaces to work-  as it’s a legacy project and a family home, we were all aware of how design would impact family life. The client also had a very clear vision of how the spaces should be used and worked closely with us to develop some of the most significant parts of the structure. The internal spaces in particular would not have been as successful without the input of the client and their belief in us to deliver the designs.
“We were also given a huge amount of design freedom too. There was a broad brief for some parts, and generally speaking, sometimes a broad brief is the only way you can develop these projects because they tend to evolve and change, so that freedom is beneficial and allowed us to be ambitious and expressive with our design work.
“The house started to build a character of its own as we started construction. Some of the big decisions on the large elements were all decided halfway through construction. Our approach to the design before we started was very rational; we modelled the building in 3D and drew up numerous sketches. But once the physical construction started, the designs were ever moving and the design work was constant. Although we came up with the overall scheme and development plan for construction the actual design element was ongoing throughout the whole process. We’ve probably got over 2000 drawings for the building ranging from detailed sections and plans to sketches that were developed on site.”

Do you have a personal favourite part of the house?
“In terms of my favourite details there have been parts of the project where i’ve had eureka moments in the middle of the night and thought ‘hang on, why don’t we do it like this?’ and the design blossoms into something that’s completely different and usually a great deal more ambitious. For example the main hall ceilings and orangery ceilings were developed in that way, where we waited for the space to be formed before we finalised the ideas and design drawings to complete technically challenging and complex designs in Oak and Ornate plasterwork. However, my personal favourite was working with the people who made it happen. We can draw fancy drawings all day long but we need the skill of the trades and artisans to physically construct and manufacture our ideas. The fine attention to detail of the various elements was realised because we found the right

people to produce our designs for us. As always with this type of Architecture, we learnt a great deal from experienced, highly skilled trades that brought a great deal to the project. Without them, we’re just left with a drawing. I am delighted that this skill was rewarded with two recent National Awards from the British Woodworking Federation who awarded Gelder Joinery the coveted Project of the Year award and also Fusion Brickwork who won the Craftsmanship Award at the recent National Brick Awards.
“It was a wonderful experience to visit the mason’s yard week in and week out to meet with the carvers, going through the detail of the ornate carvings to many of the features in the building. I wanted to ensure that the carvers had freedom with their interpretation of our sketches and designs that were developed by myself and Lydia in my office who is also a talented artist. We took the ancient Beech woodland that the house is set in and developed a motif for the estate that has found its way into many of the features such as carved airbricks, stone panels, metal grilles and carved Oak columns. Working with my own team and allowing the freedom of design that was afforded to me by the client led to some very unique individual pieces that were then expertly converted into the various materials – it was quite fun.”

What did it mean for Jonathan Lees Architects to be part of this project?
“For us it’s been huge and has taken up a lot of our lives in the office over the past few years. We like to be involved in legacy projects with masses of detail. We see ourselves as a group of artists who design and view buildings as art. My small but incredibly dedicated team of designers have worked hard to deliver our vision for the project and it has been a real team effort where Jess, Scott, Andrea and Lydia have been involved from the very start of the initial concepts all the way through to the completion – or near completion of the project!
“With a project like this, although we get hit with the usual timing and programming issues that everyone now does in the modern world, where everyone wants everything doing very quickly – we are armed with a level of technology which arguably speeds up the building process. This doesn’t necessarily play well into parts of a project where you’ve got trades who are producing items that can take months and months to complete. It’s pushed us very hard and has been a constant drive, and because of that, it makes you very proud of what you’ve done. It’s something that we probably won’t be able to replicate because it’s so unique and was the perfect combination of a client and architect who had a shared ambition and drive, a drive that was supported by the right people in the right places in terms of design and construction on site. For a client to put that level of patience and faith in you as an architect is very special. It’s part of a process that is ultimately beautiful.” 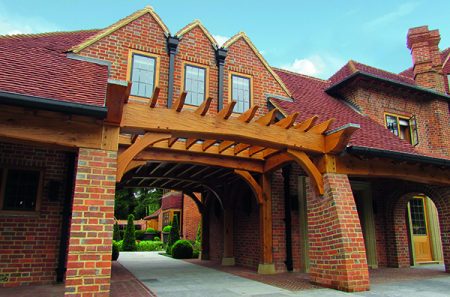 Gelder Joinery Limited specialises in architectural and bespoke joinery. The company was originally formed in 1978 as Bryan Gelder Joinery before Gelder Joinery Ltd was formed from the original partnership in 2013.
Gelder Joinery has worked on a wide variety of projects but has particular experience working on exacting heritage projects. The company also works on a number of University of Oxford Colleges, museums, stately homes & residential properties.
Gelder Joinery was recently responsible for providing all of the external oak joinery at Harpsden Wood House. This encompassed door and window trusses as well as oak joinery for the tennis pavilion, summer house, panelling, lodgers, pagodas, carport and cart-way.
Bryan Gelder, Founder, said:
“Harpsden Wood House for us has been a 4 year project which has been fantastic for our highly skilled joiners to be involved with. It has also allowed us to expand on the training we give our apprentices, allowing them to develop skills in classic joinery, which is tremendously beneficial for the future of our trade.
“As a company we take pride in the quality of workmanship, materials, communication and service we provide.”

British Spirals and Castings specialises in the design and manufacture of high quality bespoke metalwork, including staircases, railings and balconies. Each piece is produced by the company’s specialist team based in Britain, using the finest materials. The company was originally founded in 1983 but has been owned by the Harding family for 25 years.
British Spirals and Castings has worked on a wide variety of projects, from creating spiral staircases for new homes, to heritage metalworks on major public buildings and even staircases for major film and theatre productions.
Recently, the company worked closely with Jonathan Lees Architects at Harpsden Wood House, taking Jonathan’s initial design concepts for the metalwork and turning them into a reality. This included a bespoke steel profile staircase with highly detailed newel posts, which was installed in the internal gym, and a variety of decorative full height and wall-top railings for the main entrance and courtyard areas.
Richard Harding, Managing Director, said:
“This was a highly technically demanding project requiring a level of specialism and manufacturing precision which few companies can provide. For example, all fixings on the staircase have been carefully concealed to provide a flawless finished aesthetic. We also had to contend with root spread from the surrounding woodland when designing and selecting fixing methods for the curved railings.
“As a family business, we pride ourselves on delivering outstanding customer service and creating products which meet our client’s precise needs.”

Yorkshire-based Ornate Interiors specialises in traditional lime, heritage and fibrous plasterwork. In operation for over 30 years, the company boasts a vastly experienced team with decades of combined knowledge in the industry.
With traditional roots in fibrous plastering, Ornate Interiors has evolved to encompass plaster restoration, decorative plasterwork, spray plastering and haired lime plaster using traditional methods and proven processes. The company also provides GRG (Glass Reinforced Gypsum) column casings and mouldings for larger areas and for bulkheads, lighting troughs and stanchions in commercial buildings.
Ornate Interiors has worked on a number of high-profile and prestigious projects, working alongside architects, designers and local authorities. The company was recently involved with Harpsden Wood House, producing and installing bespoke fibrous plaster mouldings
Ornate Interiors said:
“We always enjoy and appreciate working alongside architects of high-calibre such as Jonathan Lees Architects LLP. We have a great working relationship with Jonathan. We share his values, one being his great attention to detail.
“As a company we take pride in our expert knowledge, experience, attention to detail and delivering the quality products and services that the client needs.”