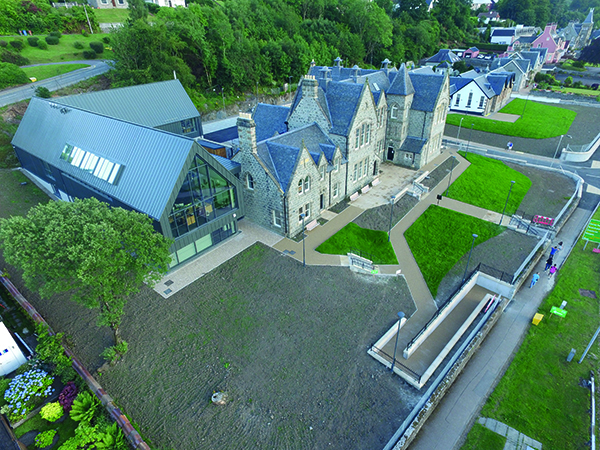 Shortlisted in the Scotland RICS Awards 2019 in the categories of ‘Building Conservation’ and ‘Community Benefit,’ The Charles Kennedy Building in Fort William has given a much needed space for Highland Council and public use.

The RICS Awards showcase the most inspirational initiatives and developments in land, real estate, construction and infrastructure and celebrate the achievements and successes of RICS professionals and their impact on local communities. Across eight individual categories, the awards are regarded as the premier property and construction awards in the country, celebrating the most innovative projects in the region and their impact on local communities.

Consisting of the now listed former secondary school building, and a new extension, The Charles Kennedy Building houses The Highland Council’s administrative and professional staff from different locations across Fort William, providing a year-on-year revenue saving of around £400,000.

The £5.7 million contract to Robertson Northern started in 2016 and was finished in 2018; the building is now in use by the public and council staff.

The name is in tribute to the work of the late Charles Kennedy MP who attended Lochaber High School and represented the Highlands from 1983 until 2015.

The former school building was in ruins when the contract was approved for the new council accommodation. It was built in 1876 and extended in 1910, and had been used as a school site. Then in 1982 on the day it was set to be demolished, a community group got a court order to save it. Over time, still standing, different groups and people of the local community tried to preserve it well, but eventually it was listed and left under the council’s authority, by which point it had deteriorated.

In 2011 the roof was in danger of collapse and was removed. The building that now stands, after many technical engineering  challenges (for example, trying to build a new roof whilst keeping the walls of the old building stable), holds modern office space and civic function rooms, on a site big enough for the council. Repurposing the building meant that the council could let go of their previous 3 separate leases, and continue to operate as a whole in one central space.

Iain Robertson, Senior Architectural Technician at the Highland Council was involved with the project from very early on and ran the project from post contract to completion.
He said: “The extension and the old master’s house of the school hold most of the office space, which is large and open plan. We tried to give the building civic function and there’s a ceremony room for weddings, functions and events. Overall we’re also trying to encourage the public to use to the building for community groups who need a space to run, so it’ll end up being multipurpose for the community.”

Being a listed building, but not having much of the listed parts left to work with was a challenge but also gave the design more freedom, as Iain explained:
“Externally we restored the building; we only had a limited amount of old photographs to work from but we paid great attention to detail in the look and keeping it within the parameters of the listing. “However, since there was nothing left internally, it gave us freedom. Inside it’s more modern and the office space more suited to today’s use.”

Reflecting on The Charles Kennedy Building, he added: “People now appreciate the space we’ve got. From the public at large there’s been a lot of appreciation because the build is in a very visible location; you see it as you arrive into the town and it has lifted that end of the town and prompted regeneration.

“It was an important project to me. I’m local and I know the history of the building, I’ve seen it in all its different guises, from when it was due to be demolished, onwards. It has been very satisfying to be involved, especially being local. I’m giving something back to the town and providing civic space back to the council.”

To discover other shortlisted buildings for the RICS awards in your area, head to: https://www.rics.org/uk/training-events/rics-awards/ 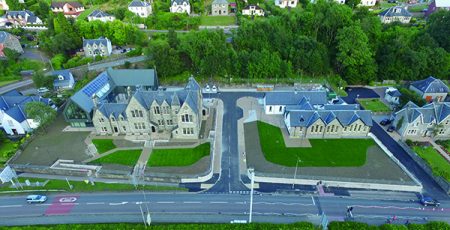