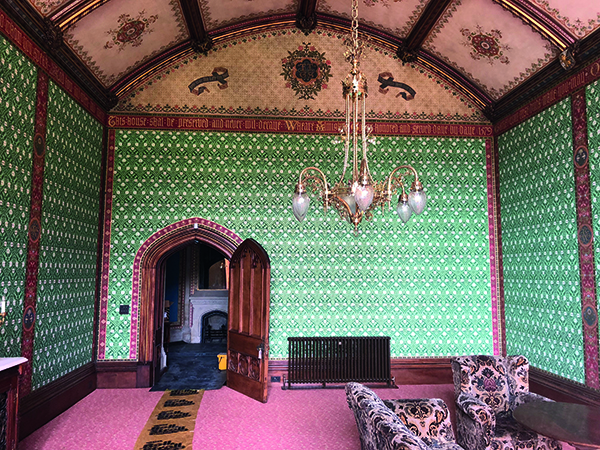 Two years ago, grade II listed Thornemead Castle in Weston-Super-Mare went up in flames. Formerly known as Uphill Manor before the blaze, the building has been restored to its former glory. Owned by Tina and Craig Kennedy, the building used to be a lively B&B but after the restoration, they decided to change its purpose and it is now available to book for a luxury self-catered home stay.

Craig Kennedy said:
“After much deliberation we decided not to open the manor in its previous capacity, because after two years off the job we’re a little out of practice and also getting older. We’ll forever be grateful to everyone who helped with the restoration of our beloved manor and look forward to welcoming families to enjoy it.”

Due to the extent of the damage, it was impossible to tell what had caused the fire.  However, the majority of the damage was caused by 60,000 litres of water used to put it out. The smoke also played its part, affecting every corner of the property and destroying the intricate historic ceiling and paintwork throughout the halls. The most historically important parts of the building, including the dining room, library, smoke room, octagonal hall and entrance halls were also severely damaged.

There were also a number of specialists involved, bringing skills ranging from historic paint restoration (Chroma Conservation) to restoration of printed wallpapers using blocks that were used in the Palace of Westminster, to French polish experts (Swan Farm Studios) to renew the gothic doors.  Additional specialists deserving a mention for their excellent craftsmanship are D J Tailby, stonemasons and pointing, Heritage Roofing and Ornate Interiors for the internal decoration of plasterwork and cornices.

Chroma Conservation Ltd carried out conservation and restoration to the seven culturally significant highly decorated rooms of the Manor, commencing with extensive research and cleaning trials of the fire damaged surfaces. Chroma subsequently  moved on to the stabilisation and cleaning of the paint layers that had survived the devastating fire, followed by reintegration of missing decorative motifs  by localised retouching with colours matched to the original extant decoration.

Some sophistic areas of décor needed to be fully reconstructed and that included recreation with specialist paint finishes such as stencilling, gilding and wood graining.

Marta Sledz, Chroma Conservation Director, commented, “It was a privilege to be involved in this fascinating and prestigious project. Uphill Manor is a Grade II* Listed building with culturally and architecturally significant Pugin inspired interiors.”

Bespoke specialist Quarterstone created 3 kitchen areas and carried out floor and wall tiling in the five en suite bathrooms. Over the last 12 years the company has under taken numerous projects including upgrading bathrooms, along with general maintenance and the upgrading of the buildings interiors. Quarterstone was pleased to be able to continue this association with Uphill Manor.

Gary Newport, Managing Director of Austin Newport Group, who managed the project, reflected:
“Uphill was a perfect model of how to efficiently restore an historic building following a fire.  It was acknowledged early on that Austin Newport had the skill-set and experience to restore the building to its former glory.  However, the collaborative approach by all involved, from client to insurer, massively contributed to the delivery of the finished building and all should be congratulated for the speedy but professional manner in which decisions were made to ensure completion.”

Now, it resides in its restored glory on the Somerset coast in Weston-Super-Mare, and sleeps up to 10 guests in five bedrooms. It’s on the edge of the Mendip Hills and in easy reach of Bristol and Bath, and less than five minutes away from the beach.

Brass chandeliers glimmer from ornate ceilings, curved oak bookcases house lyrical idioms, and it has the feel you’d expect a 240 year old gothic mansion by the sea to have. Decorative wallpapers, striking gothic architecture and intricate stonework combine to create a dramatic, but exceptionally cosy, castle escape-filled with history.

Each of Thornemead Castle’s five bedrooms features Victorian fireplaces, views of the gardens and king-size zip-and-link bed. The fireplaces were lovingly restored tile by tile by J G Grace interiors, the designs being Pugin-inspired. The master, which sits at the top of the house on the third floor, has an en-suite bathroom with overhead shower. Downstairs on the second floor, three further en-suite bedrooms (one with a dreamy clawfoot bathtub) perfectly reside, with one further on the first floor, which hides a secret staircase to one of the upstairs bedrooms; great for families. There are two separate WCs on the ground and first floors.

The £5 million refurbishment has left the Castle a perfect place for a luxury family or group celebration.

To find out about booking and availability of the manor, visit: https://www.uniquehomestays.com/self-catering/uk/somerset/weston-super-mare/thornemead-castle/

For more information detailing the films and photographs of the whole Uphill/Thornemead restoration, visit: https://www.austinnewport.co.uk/projects/weston-super-mare-bb.php