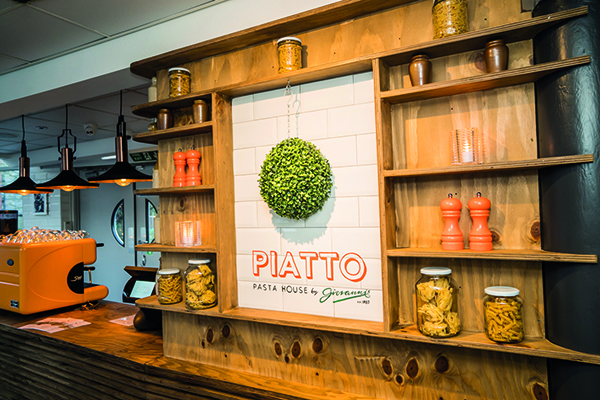 Piatto is the newest restaurant in the Giovannis franchise. Opened in early March by his son Luca and daughter Ileana, it is situated opposite the Millennium Centre in Cardiff and gives classic dishes a contemporary twist on Italian dining, with its sharing plates and modern décor.

Giovanni’s is the oldest family run Italian restaurant in the Wales, and was opened by Giovanni Malacrino in 1983. Based on the Hayes, it attracted a loyal customer base including celebrities such as Shirley Bassey, Luciano Pavarotti and Tom Jones, all of which testify to the delicious home cooked Italian food the restaurant provides. The second city centre venue resides in Park Place, which has a slightly more contemporary feel than the original establishment, and is situated opposite the New Theatre.

Giovanni Malacrino is confident that Piatto will reflect the authenticity of the Italian dining experience whilst catering to a contemporary, fast paced audience. He said:

“A dream of mine was to create a franchise of pasta houses, but the challenge was that I didn’t know exactly how to. I bought the third site for a restaurant with this in mind, but then my son Luca came and told me his concept and my daughter explained the branding behind it and blew me away. That’s when I thought ‘this is my dream coming true via my children’s vision,’ and I’m still part of it.

“It’s great when you see a business that started off really small take a different path and we’ve covered all sides of Italian dining now. For any folk who like spaghetti, we’ve got a restaurant suited to them.”

Luca Malacrino, an actor who had been living in LA, also wanted to carry on his father’s franchise, and wanted to put 35 years of knowledge and experience into catering for a contemporary audience in an authentic Italian way. It was with this idea in mind that Luca’s concept of ‘social dining’ was born. He explained:

“I’ve been frustrated by going into restaurants and seeing everybody on their phones. For me growing up, family time meant eating the food in front of you whilst socializing and spending time with your family. So I incorporated ‘social dining’ into Piatto.

“We designed a menu and table plan that fits around the idea of spending time off phones, and instead, interacting with the people around you. Some of the tables are cut triangular by plywood, so each person is sat on an angle, and the tables have been designed as a three tier platform. In between the top and bottom tier is a dead space and this is where you put your phone. The concept will be explained at the table. Piatto is about putting your phone away and enjoying family time, being in the present and enjoying the space around you.

“In addition to this, the bay side restaurant’s interior has an industrial feel. Its plywood tables, meeting steel and then contrasting with that are foliage against white tiles in a classic northern Italian style. The colour scheme is light and dark grey paired with a pleasing orange accent.

“The tables are made of plywood as it’s economically good in the long run and it’s better than using plastic materials.”

The design of the menu also incorporates ‘social dining’ with its sharing plates. Piatto means plate in Italian and there are three different sizes- all for sharing with one another.

The menu will change every three months and all the pasta is made fresh in Italy with authentic ingredients, flash frozen and then sent to us to be cooked in our pasta boilers, which adds to the authenticity of the dining experience.

The menu is made up of different elements. The first is pasta- there are ten types for customers to choose from. Then they choose their sauce and what else they’d like incorporated into their dish. Not to forget we have the option to have your pasta served in a bowl made of parmesan cheese or vegan cheese.

“Adding to Piatto’s fresh and contemporary feel is the To Go element. People can come in and buy ready cooked Piatto’s dishes and then re-heat them at home. Also on offer is a ‘Cook at Home’ package so customers can come in and essentially buy the ingredients ready, and then cook their Piatto’s pasta dishes at home.”

Included in the dining experience is Piatto’s music policy. They play current Italian chart music so customers hear the Italy of today rather than the classics. There will also be an Italian phrase of the day to learn, so if customers come more than a few times, then they are given the opportunity to order a meal in Italian.

Piatto is set to become another Giovanni classic; immersive in Italian culture, contemporary and fresh. 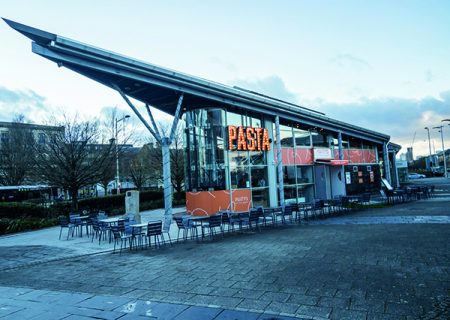