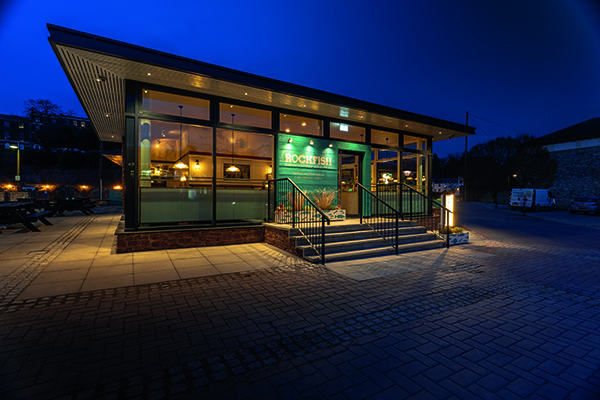 Located in a stunning location right next to the water at the Quayside, Rockfish has opened the doors to its latest restaurant in Exeter. Opened on 18th March, the site is the first purpose built restaurant for Rockfish, which over the past ten years has opened sites in Dartmouth, Torquay, Plymouth, Brixham and Exmouth.

Rockfish restaurants are located by the sea and waterside and specialise in serving fresh, local and sustainable seafood. The fish is selected by the team each day at market, where it is prepared on the harbour side by skilled fishmongers and delivered each morning to the restaurants.

Architecture studio Macaulay Sinclair was appointed by Rockfish to undertake the design of the restaurant. Unlike the refurbished properties of previous Rockfish restaurants, Exeter is a modern, eco-friendly glass building with beautiful views of the River Exe through its perimeter floor-to-ceiling glass walls.

Mike Sinclair said: “We were thrilled when Mitch approached us to work with him on designs for new Rockfish restaurants, having been admirers of his work for such a long time.”

Restauranteur Mitch Tonks said: “Working with Macaulay Sinclair has transformed the finishes in our restaurants and the way we look at the design. We are pretty clear about what we want and the team translated that brief to another level, making the design and build process seamless. We are delighted to have them on board for our expansion.

“Guests can expect a new banquette seating design creating pockets of atmosphere for intimate and family dining. The bespoke slatted-back timber seating will be upholstered in the signature turquoise leather. Rustic timber flooring, an open fire and nautical references compliment an open theatre kitchen enabling guests to engage with the chefs preparing the daily selection of seafood.”

Premier Hospitality magazine spoke to Tony Pollintine from Grainge Architects, who delivered the project alongside main contractors Fifields, ahead of the grand opening.

How did you get involved with this project?
“We knew the land owner who owned the freehold of the site. We were working for that client and he had an idea about building a restaurant facility on the site. He approached Rockfish to see if they wanted the site and we were involved from that point onwards.”

Were you given a brief for the project?
“Yes there was a brief for the project but I would say that the site is very much a combination of Rockfishes aspiration and those of the local planning department. The exterior of the building was quite a sensitive discussion because the site is in a conservation area, on the Quay and it is in a much loved public area so the planners didn’t want to put any old building there. They wanted a modern building with an industrial feel to it, respectful of the Industrial heritage of the area”.

What would you say are the design highlights of the space?
“Overall it has an industrial aesthetic to it. It is a glass pavilion with a stone central section that comes up through the restaurant area and out of the roof. That aspect is reminiscent of the old stone buildings on the quay so there is a combination of the old buildings meeting the new industrial aesthetic. The idea of the glass pavilion was that because it is located in a public area, you can see through the building so you can see the river or the canal from whichever side you are sat on. The form of the building was derived from the line of the river, old railway lines and heritage assets that were on the site to begin with so it really is grounded in its location.

“We have also included a green roof. This was important because the restaurant is lower than some of the historic buildings around it so you look down onto the roof; therefore we felt a grass roof was important to the design.”

How important has this project been for you to be involved with?
“It has been nice because it is a new client and due to the success of this site, we are planning to go and look at other sites for Rockfish. Overall it has been good and a really nice, new client. It has also been good to do a public building in a public area.”