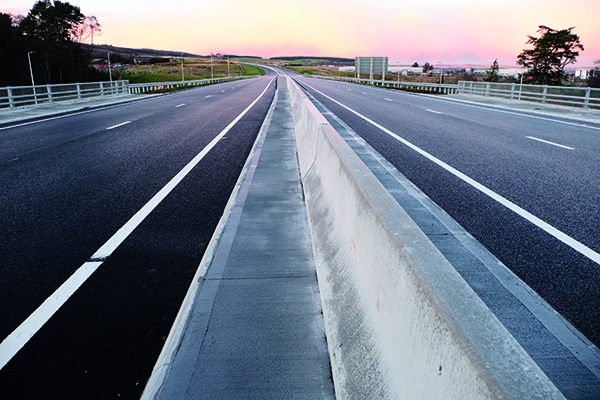 The Aberdeen Western Peripheral Route between Craibstone and Parkhill has opened to traffic, ensuring road users across the North East will have access to the entire 36 mile (58km) route.

Confirmation of the opening followed Aberdeen Roads Limited providing the necessary technical assurances for the River Don Crossing, which was required before the new section of road could open. This new 4.5 mile (7.5km) section of road links the southern Craibstone to Stonehaven and Charleston section with the Parkhill to Blackdog section in the north.

“This new section of the AWPR between Parkhill and Craibstone now allows the full benefits of this transformational project to be fully realised. Since the major part of the road opened in December 2018, the overwhelmingly positive feedback has demonstrated the positive impact that infrastructure can bring about in people’s lives, the quality of their environment and the economy as a whole.

“The bypass was first proposed over 65 years ago but it took this Government to take the project forward in a meaningful way back in 2007. Despite the many challenges since then, we have taken a responsible and steadfast approach to delivering for the long-term benefit of the people and businesses of the North East and Scotland as a whole.

“We will continue to work constructively with Aberdeen Roads Limited as it moves into the operational phase of the project and it builds stronger relationships with the community it now serves.

“We would like to thank local communities, road users and businesses from across the north east and beyond who have been extremely patient waiting for the final section of the road to be opened.”

The link road connecting the C89C Chapel of Stoneywood to Craibstone Junction was also opened to use, allowing work to begin on permanently closing its junction with the A96.

“The AWPR is a vital component of Aberdeen City Council’s £1billion capital programme underpinned by the Regional Economic Strategy which is providing the bedrock for a bright, prosperous future for the city and wider region.

“The opening of the AWPR, a much needed and long-awaited development, will have as significant an impact from an economic perspective as it will in terms of transport.

“The transformation of Aberdeen continues at great pace. It’s vital we keep building momentum and celebrate the change that we’re all part of, with many more important dates to look forward to in the months and years ahead.

“The AWPR, supported by the Council’s £75m investment, is vitally important in that wider transport strategy and will support not only our own capital programme but those of our partners in the city.”

“We have all seen at first-hand the incredible efforts of the workforce who have made the vision a reality and on behalf of Aberdeen City Council I must thank the thousands who have contributed to what is a landmark project.

“The improved connectivity will touch all of our communities and is something Aberdeen has craved for generations. It has been a long, hard process but now the opening is upon us it’s vital we look forward and take advantage of the opportunities it presents.

“The premise of the city centre as a destination rather than a thoroughfare will become far more appealing and the City Council is supporting that with developments that are bringing positive change to Aberdeen’s traditional heart.

“The opening of the AWPR marks the end of a construction programme but the beginning of an important new chapter for Aberdeen.”

“This is the moment we’ve all been waiting for. Aberdeenshire Council’s £75million investment in this transformational project has gone a long way and the result is truly impressive.

“There have certainly been challenges along the way but we must now focus on the benefits we are already beginning to enjoy in terms of improved connectivity and reduced congestion, as well as the opportunities the route presents to existing and new businesses. I’d like to thank everybody involved for making this vision a reality.”

This new section follows road openings between Craibstone to Charleston and Stonehaven in December 2018, Balmedie and Tipperty in August 2018, Parkhill and Blackdog in June 2018, and the Craibstone Roundabout and Dyce Drive section in September 2016.