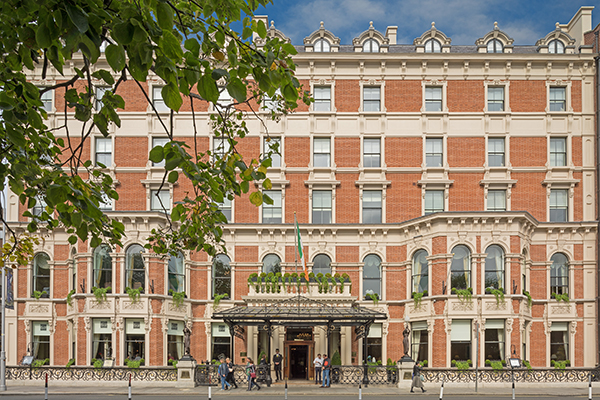 The Lord Mayor’s Lounge at The Shelbourne Hotel

The Lord Mayor’s Lounge at The Shelbourne Hotel last year completed a significant and elegant refurbishment led by internationally renowned designer Guy Oliver, principal designer and owner of Oliver Laws, the established London design company. He is renowned for his work on many historic properties in London and around the world, including Claridge’s, The Connaught and Number 10 Downing Street.

Decorated in fresh, pretty shades of golden yellow, pale green, cream and ivory, and with new seating arrangements including a centrepiece banquette, similar in style to those found in many grand 19th century hotel salons, known as a ‘sociable’, the Lord Mayor’s Lounge has been redesigned as a very clear tribute to its illustrious past but with a modern sense of comfort and glamour.

The newly refurbished Lord Mayor’s Lounge also reinstates two historic 19th Century Waterford Crystal Chandeliers, originals of the hotel townhouses and introduces a pair of handsome Chinoiserie cabinets as pantry units. All of which, along with the piano, gilded mirrors and the classic Irish country house colour scheme of buttery yellows and golds, emphasises the sensation of being somewhere truly special to spend some time.

Reopened on 14th April 2018, after its elegant refurbishment, The Lord Mayor’s Lounge at The Shelbourne is home to one of the most pleasurable of rituals at Dublin’s favourite five-star hotel – afternoon tea.

Alongside the essential elements of a traditional afternoon tea – the selection of impeccably dainty sandwiches, homemade buttermilk scones with clotted cream and jam – the afternoon tea menu at The Shelbourne showcases the art of the Pâtissier, as it always includes some exceptional and exquisite pastries created by Executive Chef Garry Hughes and his talented team of pastry chefs at the hotel.

Celebrating 195 years of history and tradition, The Shelbourne is a timeless landmark in the heart of Dublin. Magnificently renovated and the largest five star hotel in Dublin, the hotel overlooks the city’s grandest square, St. Stephen’s Green which is located within a few minutes’ walk from Dublin’s most famous landmarks, as well as the key shopping and cultural areas of the city.

The Shelbourne has for nearly two centuries, played a significant role in the literary, social, political, culinary and artistic traditions of Irish society. In 1922 the Irish Constitution was drafted at The Shelbourne, chaired by Michael Collings, and one of the two original copies are to be found in the Constitution Suite. The luxury 5 Star Dublin City Hotel is an iconic landmark in Dublin, well known for its fine dining, elegant Afternoon Tea and gracious surroundings. The restaurants and bars are some of the finest in Dublin City in and in addition they offer luxurious, gracious private dining venues.

The Lord Mayor’s Lounge has been refurbished as part of a wider hotel refurbishment programme. Over the years, the hotel has completed renovations of the guest rooms, the grand staircase, the heritage rooms and suites, the hotels 195-year-old façade and they just completed refurbishment work on their stunning lobby.

For more information or to make a reservation call +353 1 6634500 or visit www.shelbournedining.ie. 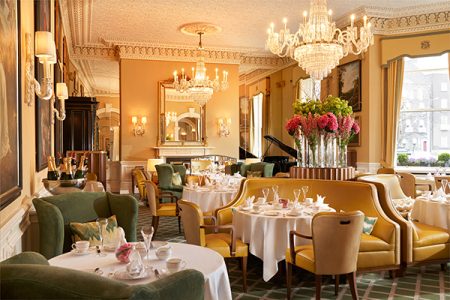 Ben Whistler is responsible for the exceptional quality furniture specified by some of the world’s most respected interior designers. From one-off pieces for a private residence to multiple items for hotels and restaurants, the company has built a reputation on craftsmanship, quality and detail.

Drawing on decades of experience, Ben Whistler is able to build strong relationships with clients and offer trusted advice.

The company was recently involved with the refurbishment of the Lord Mayor’s Lounge at The Shelbourne Hotel. Ben Whistler provided all the dining furniture and seating, including the tables, chairs and banquette seating. The company has previously supplied furniture to a number of high-profile hotels such as Claridge’s, The Berkeley, The Savoy, The Connaught and The Mandrake Hotel.

A spokesperson for Ben Whistler commented:

“It means a lot to have the privilege of showcasing our craftsmanship in some of the most beautiful Hotels around the world.

“As a company we take pride in our commitment to providing an excellent service that matches the outstanding quality in the furniture we manufacture.”