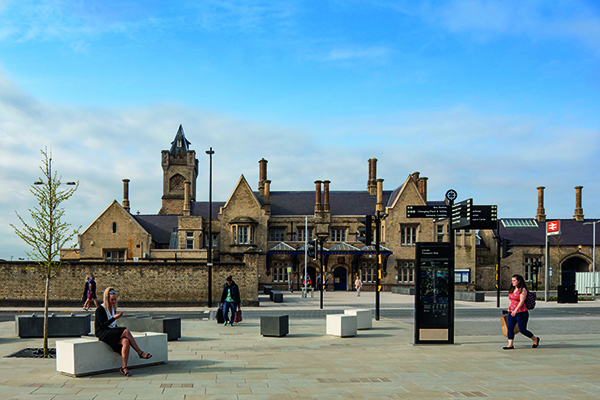 Over 12 months since it first opened to the public, Lincoln Transport Hub continues to receive plaudits for its transformative impact on the city centre.

Lincoln Transport hub was completed in January 2018 and provided a state-of-the-art bus station, 1,000 space multi-storey car park, retail space and a new pedestrian plaza. Improvements were also made to the rail station forecourt.
The project has been hailed as an enormous success and public reaction has been hugely positive from businesses, residents and visitors to the city. More recently, the project received two RICS Award nominations in the East Midlands region. It has been shortlisted in the ‘Infrastructure’ and ‘Regeneration’ categories.

The design of the Transport Hub was led by John Roberts Architects and Willmott Dixon acted as the main contractor.

The proximity of the Transport Hub to the rail station meant an important consideration was ensuring a link between the two. The bus station is a contemporary reinterpretation of the rail station wall with a blue brick base and yellow upper. The use of glulam beams, and curtain walling, makes for a light and airy interior. A total of 14 bus bays means over 600 bus departures can take place each weekday. Timetables and service information appear on interactive touchscreens and a 5m video wall.

The six-level multi-storey car park was constructed with a steel frame for cost and time efficiency. Buff facing brick towers reflect the historic hillside while red brickwork at the base adds visual weight.

A significant portion of the design work ensured the historic landscape of the city has been preserved, including the protect views of the cathedral. John Roberts Architects has made sure the structures fit seamlessly into the immediate environment.

Planning for the scheme was initially granted in June 2016 and this was swiftly followed 3 months later by an 8-week archaeological investigation. Works were re-scheduled to enable the multi-storey car park to be opened ahead of schedule by November 2017 in time for the Christmas lights switch on with the Bus Station opening in January 2018.

Lincoln Transport Hub provides an impressive gateway to the city offering a high-quality experience to businesses, visitors and residents.