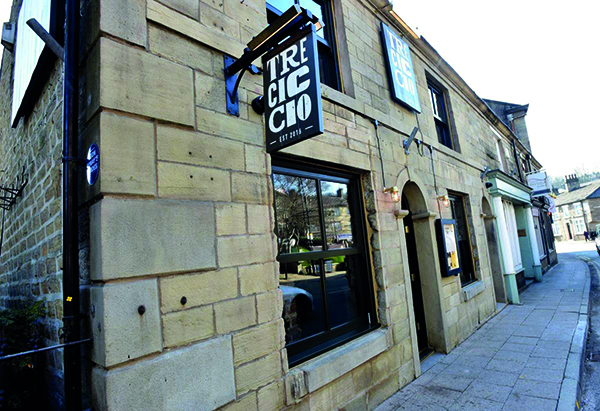 Restaurant brand Tre Ciccio has opened its third site in Ramsbottom. Following in the footsteps of successful sites in Altrincham and Stockport, the Ramsbottom site opened in early March to rave reviews.

Commenting on the feedback, Tre Ciccio owner James Gingell said: “Feedback has been fantastic. We are ecstatic with what we have heard so far.”

Tre Ciccio, which translates to ‘Three Chubby Friends,’ was born on 11th July 2016 following a magical summer’s evening meal in the Campania region of Italy. Invited to the extremely popular La Terrazza Restaurant in Calvanico by the Scafuri family, it was an experience like never before. From owner Michele managing his hungry guests using his scrap of paper and pen, to the mouth-watering authentic Neapolitan pizzas, roast chicken diavola, Cacciatore and freshly picked porcini mushrooms that were devoured, the guys left craving more and from that night onwards, never looked back!

Tre Ciccio is located at 16-18 Market Place, in a building known for its famous food legacy. After being opened in 1985 by Chris Johnson and his wife Ros, Ramsons went on to become one of the North West’s leading restaurants, picking up numerous awards. It eventually became The Venetian Hideaway in 2014 but closed after sustaining severe fire damage a few years later.

James said: “When we came up with the idea of Tre Ciccio the first site we looked at was the site we are now in in Ramsbottom. At the time there had been a fire and we couldn’t get near it so we had to leave it and decided to look towards Cheshire. There wasn’t really anywhere else in North Manchester that we wanted to look at because Ramsbottom was always going to be the destination. Now it’s like we have come full circle.”

The site has undergone an extensive refurbishment in order to take the building back to its original design, as well as bringing its terrace into use. Owners James Gingell, Allan Ritchie and Francesco Scafuri worked alongside Phaus Design, who designed the other two sites, to transform the building.

Paul Allen from Phaus Design told Premier Hospitality: “Ramsbottom is over three floors so we decided to bring the aesthetic from the Altrincham site to Ramsbottom. When you walk in you have a mix of the bar area and pizza prep area, which provides the theatre and open working environment that we first created in Altrincham.

“At Tre Ciccio they are focused on the authenticity in the food and how it is prepared, so that has been pulled in to the interiors. Any objects we brought into the space are old units and we haven’t recreated anything. With each of the spaces, we try to be honest with the materials so there are no fake materials like laminates, we keep away from those kinds of things and make it about the quality and providing that authentic look and feel.”

Work on the site began in December 2018 with PH Joinery acting as the projects main contractor.

Paul added: “We also really wanted to exploit the potential of the site. There was already a flat roof at the back of the site so we said lets extend that and maximise the best views of Ramsbottom that are on offer.

“The building is a grade II listed building so we had to work with the planners and the conservation team throughout the project. We wanted to reveal existing features and keep as many as possible within the site. On the ground floor we uncovered an existing staircase down to the basement area which is made of local stone. We didn’t want to use it as a walkway to the basement but told the conservation team that we would keep it and restore it where possible. We have now put a piece of glass over it so when you walk in you see this echo of the past, and that is the mantra of the site. On the first floor we found an old fireplace, that doesn’t work, but it’s a feature we have cleaned up to show off the history of the building.”

Artwork from Chris the Cunning Craftsman has also been commissioned for the space in the form of a brand new mural featuring Tre Ciccio’s iconic cockerel alongside the names of each of the owners, creating a focal point for diners.

Paul said: “We have worked with the guy’s right from the beginning. I have known James and Allan for a while so these are very important projects for us. As long as they want us, we are here for the journey of how far they want to expand.”

James added: “I think this is great for the area because there is an award-winning Spanish restaurant that is just around the corner from us and there are also some great Spanish restaurants but there wasn’t really anything Italian serving what we are serving.