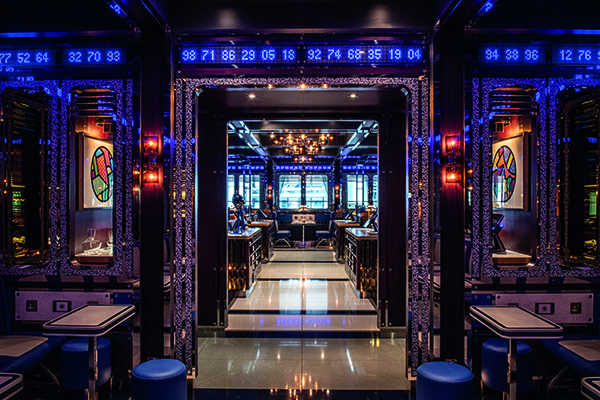 The interior by BradyWilliams studio aims to equal the glamour and flamboyance of Bob Bob Ricard (recently hailed ‘a national treasure’) but with a contemporary, urban design befitting its Square Mile location.

The opening is 14 months delayed but nevertheless, the restaurateur Leonoid Shutov says:

“Good things come to those who wait. I am delighted that we will be opening Bob Bob Cité a mere fourteen months later than we had intended to. Bob Bob Ricard was two years late when we built it, so I feel this is already a big improvement!

“One concierge service told us that they have had over five thousand reservation requests for Bob Bob Cité since it has been delayed. I am thrilled that, come March, we will be able to welcome everyone to enjoy Eric’s outstanding food in a restaurant which I hope will become as much of a City of London landmark as the Cheesegrater (his other restaurant), itself.”

It is approximately 13,700 square feet on floor 10 of the 52 floor Leadenhall Building. The floor is a hanging box, suspended below the main structure and is suspended above the 30-meter high open-air atrium.

The menu has been created by Michelin-starred chef, Eric Chavot, and offers the classic French-country style cooking, described by critic Jay Rayner as ‘the sort of brilliant faux paysanne stuff you get when you put a culinary aristocrat in the kitchen.’ Eric uses carefully sourced produce, mostly from the United Kingdom, but travelling further afield for authenticity to add to taste buds – such as mineral water from a naturally-carbonated source in his native Arcachon.

‘Pressez pour le champagne’ buttons will be a fixture of Bob Bob Ricard’s French-themed sibling. Champagne is offered in Magnums, Jeroboams and Methuselahs at no premium to standard bottles, allowing guests to enjoy the theatre and luxury of these big formats without paying extra. Bob Bob Cité also has one of the largest selections of Armagnac (over 100 vintages starting with 1888) and a collection of Chateau d’Yquem – the world’s greatest sweet wine – going back to 1866.

BradyWilliams told Premier Hospitality about their involvement in the project:

What does the project involve?

“As well as a main restaurant floor, a unique feature of this project is not only that there are three private dining room spaces for up to eighteen guests, but that each has its own personal anteroom to allow for a standing drinks reception prior to dining. At a time when space is at a premium, this level of elevated experience is the ultimate luxury. The 13.5m length bar is confident in design in that it has no stools and the bar is also recessed in the wall. Opposite this is a snug bar lounge allowing for drinks, both pre and post dinner. The bar snug is flanked on both sides by two impressive wine and champagne rooms. These rooms anchor the entire design allowing clientele to not just view the wine, but go directly into the space and choose their own bottle.”

What are the main materials that have been used in the construction?

“We used polished stainless steel to outline all architectural features; creating a polished, slick envelope whilst surface mounted, pig nosed fixing screws reinforce the notion of futuristic aviation. Warm gold mirrors, elements of brass and accents of amber glass create warmth ensuring the overall space does not feel cold or clinical. The use of screens wrapped in contemporary spray suede adds softness but also creates intimate spaces within the restaurant.

“Leonid was emphatic that he wanted to achieve a red and blue theme. This was created through a layering of many tones of both colours to create an indulgent sensory overload. Mindful of the iconic architecture, we have introduced grey and yellow tones to compliment the building’s façade.”

What was the original brief?

“Taking the original BBR as inspiration, the brief was to design a more contemporary, forward thinking sister restaurant inspired by 21st century period design and air aviation. The design is minimalist in approach but maximalist in its overall finishing and execution. This process was a true collaboration between Leonid and Shayne of BradyWilliams. The ultimate goal was to create somewhere quirky, eccentric and memorable, a space unlike any in the world. In many ways the design pushes the notion of good taste with a design language that is definitive, distinguished and truly unique.

“As a principle for this restaurant, the aim was not to follow trends. Despite that, its opening in 2019 has coincided with maximalist design being on the lips of lots of reviewers. Our design is definitely maximalist in approach but feel we have developed this aesthetic with a more contemporary twist.”

What does it mean to you to see a project like this get underway?

“It has been a true collaboration with the client Leonid that we thoroughly enjoyed. Seeing it finally being shown to the public is something we are extremely proud of.” 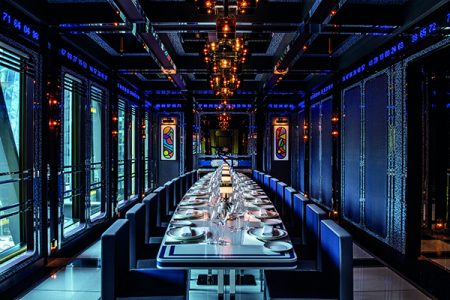 We were told from the start that this project would challenge the art of the possible in terms of accuracy, innovation and attention to detail, and it has!

The combinations of stone floors, timber screens, metal trims, papered panels and ceiling beams all line up precisely throughout the venue. This has been achieved by a combination of careful design, accurate setting out, narrow tolerance manufacture, skilful installation and the determination to maintain exacting standards from start to finish of the project, bringing to fruition what is a stunning restaurant.

As is so often the case with our projects, the team had to deal with the added complexity of working above ground floor, in an occupied 48-storey building with the associated access, delivery and noise restrictions.

That the end result is so pleasing is testament to the manner in which the whole team – contractors, designers, client and project managers – worked together to achieve the clearly articulated objectives of the project.

Keytask was founded in 2002 and has delivered projects for clients all over the world. The company typically works on projects that are new-build or refurbishment of hotels, high-end restaurants, resorts, clubs and bars/pubs.

Previous restaurant projects delivered by Keytask include: VIVI, Delaunay, Bob Bob Ricard, Brasserie Zedel, Jamavar, The Boundary, Bombay Bustle, Eneko, and Milos. Other major projects include the full refurbishment of One Aldwych Hotel, the conversion of the Great Eastern Hotel to Hyatt’s new Andaz brand and refurbishment of the Pilgrm Hotel.

Keytask provided full project and cost management services on Bob Bob Cité. Working with the designers, contractors and the landlord the company developed and coordinated the project strategy.

“Bob Bob Cité is a tremendous project. The Client, Leonid, has incredible vision and an absolute eye for detail. It will far exceed everyone’s expectations. The added bonus of working in the iconic “Cheesegrater” is a wonderful experience for all.

“As a company we take pride in adding value and making sure our clients’ visions are delivered.”

Stan Tarver Shopfitting specialises in bespoke shopfitting and joinery. The company works across a number of sectors, including hospitality, retail and leisure, as well as high-end residential projects.

Stan Tarver Shopfitting has been in operation since 1992 and in that time has completed projects for a number of high-profile clients such as Fortnum & Masons, Harrods, John Lewis, Selfridges and World Duty Free.

Having known Leonid Shutov for over a decade and previously worked on the first Bob Bob venue – Bob Bob Ricard – the company manufactured the joinery and produced the working drawings for themselves, metal workers and all the site installation.

“It was an honour to be nominated by Leonid to supply all the joinery for his latest project. This will be a third full project with him and it is a pleasure to work with a customer who requires the highest quality but is also very knowledgeable.

“We offer a service that is second to none. This starts with being totally transparent with costs. We pride ourselves on producing very informative CAD Drawings to include all the various associated trades. Finally, the quality during manufacture is always to individual customer expectations.”

The Japanese Paper Place specialises in quality Japanese paper, covering a wide range of uses for artists, designers and architects.

The company has been in operation for 40 years and has often worked with interior designers and architects in providing translucent Japanese natural papers in screens for windows and partitions, and in a variety of lighting applications.

Most recently, The Japanese Paper Place was involved with the Bob Bob Cité restaurant with alongside its long term London partner, Shepherds Bookbinders. The designers wanted to use a specific selection of hand silkscreened papers (“chiyogami”) on the walls and ceilings of separate booths in the dining space and entrance of Bob Bob Cité.

From a choice of over 1000 variations, some of which were initially seen at Shepherds Bookbinding in London, 5 were selected and The Japanese Paper Place arranged for custom colours of ink to be used for printing the graphic traditional Japanese patterns in special family-run studios in Japan.

“This was the second time the designers at Bob Bob used chiyogami paper in a restaurant context. The first was Bob Bob Ricard. These fine papers are popular around the world with artists and bookbinders, but it was unusual to have them used on this scale, but they worked magically!

“We pride ourselves on our stock and distribution worldwide, of an unparalleled range of handmade and machine made Japanese papers in a tradition going back 1400 years. No other country’s paper can compete with them for quality, beauty and versatility and we have focused only on Japanese papers since our beginning to inspire creativity.”

Hallmark Kitchens specialises in the design development, supply and installation of catering equipment for commercial kitchens.

Found in 1983, Hallmark Kitchens works across a wide spectrum of market sectors including restaurants, hotels, business & industry and education. Standout projects include Aqua and Hutong in the Shard, Milos in St James, Ruya in Mayfair, 2o Stories in Manchester and La Dame de Pic in the Four Seasons Hotel at Tower Bridge.

Having successfully completed a refurbishment of the basement catering facilities at Bob Bob Ricard, Soho in 2014, Hallmark Kitchens was invited by Leonid Shutov to progress the design development of Bob Bob Cité. The company worked closely with both Leonid and his executive chef Eric Chavot to interpret their very specific operational requirements and equipment preferences within the available footprint.

“Working with Leonid Shutov on his second restaurant is a great honour and a reflection of everything we endeavour to achieve at Hallmark Kitchens. To be able to work with a Client to a level of success where we are invited to work with them again is a great testament to Hallmark’s top-down ethos and the professionalism of our dedicated Team.

“By carefully listening to what our Clients ask, we gain an understanding of their catering requirement, we select best-value equipment that’s fit for purpose and then with the minimal of fuss we deliver our projects on time and within budget.”