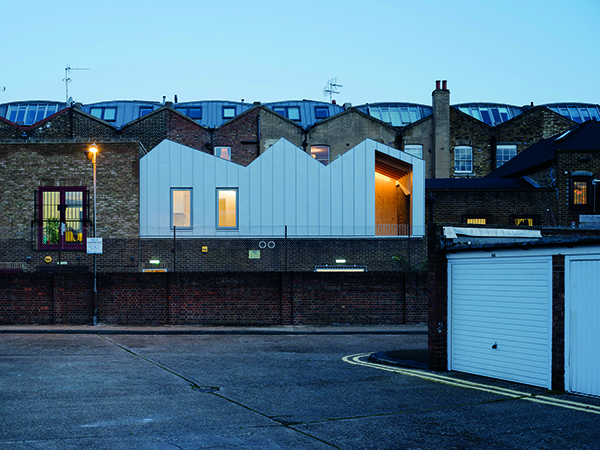 Broadway Market is a vibrant area, lined with two and three storey properties with a variety of commercial uses, and on Saturdays the street is pedestrianised for a lively market. Parallel to the main street, Broadway Market Mews is largely occupied by local businesses, shops and a strong artist community that has been in the area for a couple of decades.

The project at 6 Broadway Market Mews comprised the refurbishment of the existing workshop on the ground floor and a first floor extension to create a new studio flat. Having worked as an artist in Broadway Market since the early 90s, the client has witnessed significant change in the area and felt it was important to make a positive contribution through their project.

Speaking to Premier Construction about the project, Joanna Barnes from Delvendahl Martin Architects said: “In terms of the brief, the client was quite clear on what they wanted to achieve from the programme and that was to refurbish the workshop and extend to the first floor with a studio flat. We were then given creative freedom in terms of the design of the scheme, its response to the site, the materiality and detailing, and the client was very open to seeing what we would come up with.”

Driven by the client’s desire to enhance the mixed character of the surrounding area, the scheme aims to create a contextual yet unique and surprising response, moving away from the brick boxes emerging in the immediate vicinity, whilst staying true to the industrial quality of the mews. The retained brick structure acts as a plinth to a new lightweight timber frame extension, with exposed glulam spruce beams to the interior, clad in light grey standing seam metal to reflect the changing light. The approach was to generate a shape which would maximise daylight penetration and minimise the sense of enclosure to the surrounding properties, softening the impact of the development. The new building, with its sloping planes and setbacks, has a characterful roof line that alludes to the working history of the Mews.

“In terms of key highlights, in the new extension we exposed the timber roof construction,” said Joanna. “Since it is a tight site, providing height from the pitched roof and exposing the structure allows the studio to breath, and benefit from the generosity of the space. We also used external metal cladding and adapted some of the standard details. We focussed in particular on the parapet detail to offer a slimmer profile outlining the front façade, to retain the clarity in the geometry of the building form as much as possible.

“The site is small and surrounded by other properties so there had to be considerations taken into account for overshadowing and blocking of views. These were some of the main factors that led to the development of the shape, geometry and form of the scheme. The pitched roof allows light to come into the spaces behind and also minimises blocking the views and overshadowing as much as possible. Our intention was to create a sensitive intervention in the area as we didn’t want to be developing in a way that was making things worse for those around the site. We wanted to provide a better outlook than what was there originally.”

The project forms part of a ‘family’ of interventions that Delvendahl Martin Architects are currently working on in the vicinity and expands upon ideas explored in the practice’s earlier extension to the adjacent ‘Fabrications’ design studio and shop. Collectively, these begin to establish a new vernacular language across Broadway Mews.

Joanna concluded: “Generally feedback has been positive. The client is very happy and I think it went beyond their expectations, so that was good.”