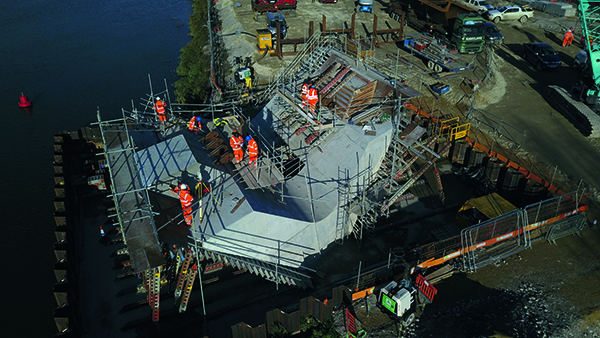 The Ely Southern Bypass, a new road connecting the A142 at Angel Drove to Stuntney Causeway that includes bridges over a railway line and the River Great Ouse, has been nominated for a RICS 2019 East of England Award.

The Ely Southern Bypass, which opened to traffic in October 2018, stands out for the design and construction of a geometrically complex curved bridge and viaduct carrying the new bypass over the railway and River Great Ouse on a flood plain and weak soils.

The new route has helped to ease congestion in and around Ely, removing the need for heavy goods vehicles to use the railway level crossing, and allowing them to avoid an accident-prone low bridge.

The RICS award nomination in the ‘Community Benefit’ category is the latest success for the project and the partnership between Cambridgeshire County Council and its principal contractor, VolkerFitzpatrick. Working in close collaboration, the project team used their knowledge of Network Rail specifications to develop a cost-effective solution to lower the railway’s overhead lines, enabling a lower bridge height, while translating the architectural vision into a buildable design and responding to stakeholders’ wishes to retain views of Ely Cathedral.

Recognition of the importance of community benefit is particularly important as during construction the project team invested in the community through local social enterprises, working with eleven local SMEs and employing 32 local people. Other activities included hosting schools, work experience opportunities, supporting unemployed people back into work and a careers presentation at a local prison.

Ben Joyce, project manager for VolkerFitzpatrick, said: “We are proud to have delivered a scheme that has provided such benefit for local residents and visitors to Ely. Our project team also went the extra mile by engaging with local schools, colleges and residents, to ensure we gave back to the community during the construction period.”

“The road will not only solve long-standing problems and reduce journey times for drivers, but the new bypass was designed and built around a national heritage site with a new walkway for residents and visitors to admire the spectacular views of Ely Cathedral.”

The two year design and build project included over 2,000 tonnes of structural steelwork and utilised more than 5,000m3 reinforced concrete and approx. 180,000m3 of clay, over half of which was sourced from a local farm in Stuntney.

Four geometrically complex V-shaped piers each had to be individually designed to support the viaduct’s curved profile. VolkerFitzpatrick used 3D technology to accelerate the piers’ safe construction. This was supplemented by 4D step-by-step animated construction sequencing and a 3D printed model to improve visualisation of how to construct them for the supply chain. This enabled the exceptionally accurate formwork and steel assembly sequencing required, which would otherwise have been unachievable.

The road officially opened with a ceremony on 31 October 2018 and since then a significant amount of through traffic has been removed from the station area, dramatically reducing congestion and allowing better local access to the historic city centre, business areas and the railway station. Traffic can avoid a low bridge that was previously among Network Rail’s top five most struck bridges, removing a barrier to economic and sustainable growth caused by congestion. 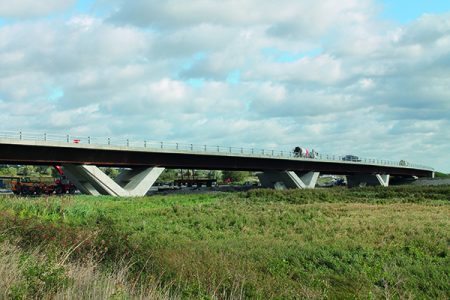 For the construction of the viaduct, VolkerFitzpatrick looked to RMD Kwikform and Sword Construction. The viaduct is the first UK project with offset V-shaped piers, which posed some unique challenges to the work.
VolkerFitzpatrick worked with Sword Construction and RMD Kwikform to find a solution. Due to the intricacies of the viaduct and V-Piers, 3D printing was utilised to provide a real-life, physical picture of the solution. This visualisation allowed the team to streamline the planning process and physically see the working area, allowing them to plan the best way to manoeuvre equipment into the cofferdam.
RMD Kwikform supported the project with their newly launched visualization tool, LocusEye. This allowed the team to visualize the solution with VolkerFitzpatrick and Sword, rectifying any potential issues ahead of time. In addition, through the physical modelling, it allowed for engineers to better understand the tolerances and the movement of equipment.
This 3D modelling technique played a key part in the development and design phases of the project. Due to the viaduct’s very complicated geometric structure, which proved difficult to accurately model in two dimensions, RMD Kwikform created over 120 different drawings to highlight the varying dimensions and curvature of the structure, leading to the model being 3D printed.