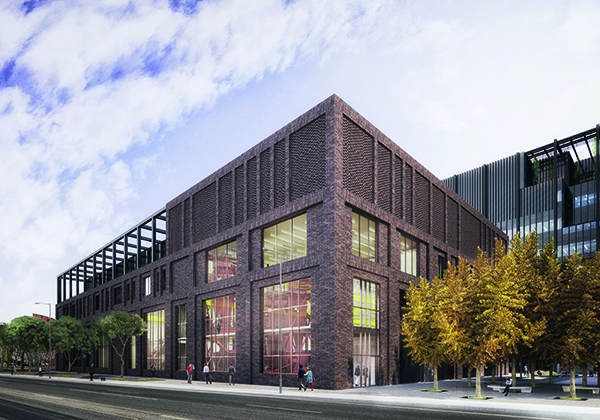 The University of Manchester’s Engineering Campus Development (MECD) will be a landmark that celebrates engineering within the world’s first modern city. Once complete, MECD will be the new home to the University’s four engineering schools and two research institutes from the Faculty of Science and Engineering (FSE).

The scheme boasts 70,590m2 of interactive learning environments, flexible labs and bespoke project areas with cutting-edge technologies to support innovation, creativity and collaboration on a completely new scale.
Commenting on the project, Otto Diesfeldt from architects Mecanoo said: “MECD is one of the largest, single construction projects ever undertaken by a higher education institution in the United Kingdom. It will transform the way in which the University educates future engineers in response to the needs of the fast-changing global economy.”

The centre of the complex is MEC Hall, the main student hub, which acts as a gateway to the city and the University. The building comprises of various types of spaces from offices and teaching areas to laboratories and support spaces and its adaptable floor plan allows for internal reorganisation and the possibility to extend office or laboratory spaces. Large voids can be filled at later stages to become office settings just as the open study spaces along the buildings perimeter can be transformed into laboratory settings. Throughout the complex, all specialist laboratory environments have been designed to the highest service requirements to prepare for unpredictable change. All can transform into any number of speciality environments to respond to the changing needs of research, curriculum or spatial layout.

Mecanoo has been the central communication and design beacon throughout the design process. The design team worked closely with the University to develop a new-build design that responds to the individual needs of each department. As Lead Architect working alongside main contractor Balfour Beatty and subcontractors Sipral, Mecanoo led the BIM process and controlled the 3D building model used by other disciplines to integrate their services. Due to the specialist nature of the lab and workshop environments, BIM was central to align the technical building systems and reconcile the specialist requirements for each area of the building. Mecanoo was also responsible for integrating more than 2,000 pieces of laboratory equipment into a BIM environment.

Integrating architecture, interior and landscape, Mecanoo’s design will deliver an inspiring, highly flexible first-class teaching and research environment that will transform the way in which the University educate future engineers.
MECD will have a strong identity that reflects Manchester’s past, present and future – a city of pioneers, continued to be led by discovery. The design is driven by the core principles of visibility of activities, technology, permeability, urban continuity and craftsmanship.

As a gateway between the existing University of Manchester campus and the city, MECD’s open character will attract people to the facilities and showcase the activities within. A palette of simple and honest materials, like brick and steel, are combined with a strong articulation of form and clear structural expression across the façade.

Otto added: “The Urban Real adjacent to the scheme was included in our scope. Some of it has already been completed as part of an early works design package to ensure access to the Aquatics Center. The main event square (south west of the site), the pedestrian connection (running the length of the project from north to south) and a small square (between Odd Fellows Hall and Upper Brook Street Building) are all integral parts of the design.”

The new campus will heighten the visibility and accessibility to the University’s activities in engineering and the applied sciences, facilitating a stronger engagement with industry, local schools and the wider public.

The project is due for completion in 2021. 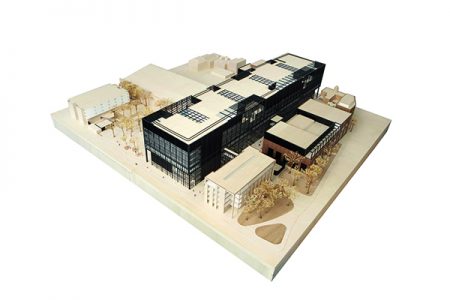 N D Oliver & Co was instructed in 2013 by the Manchester University to carry out a topographical survey of the site whilst it was still in use as mainly halls of residence with some academic space.

Over the next few years a range of additional services were provided to aid the design process and these included a utilities and buried services survey of the site, laser scanning the surrounding buildings for a daylight impact assessment study and a Revit model of the listed Oddfellows Hall, which was to be retained and incorporated in the new campus.

N D Oliver & Co’s involvement continued with further various survey works for the main contractor, Balfour Beatty, including the design, installation and operation of a monitoring scheme to check for movement of the closest significant surrounding structures. The monitoring scheme was put into place before commencement of the groundworks and continued until completion of the ground floor slabs, a period of almost two and a half years. Daily reports of the recorded movements of structures and the basement pile walls were published via the site intranet.

Norman Oliver commented:
“We are proud to have played a role in such a significant project for Manchester and the University. Construction work is now well advanced and we look forward to the completion of what will be an impressive building.”