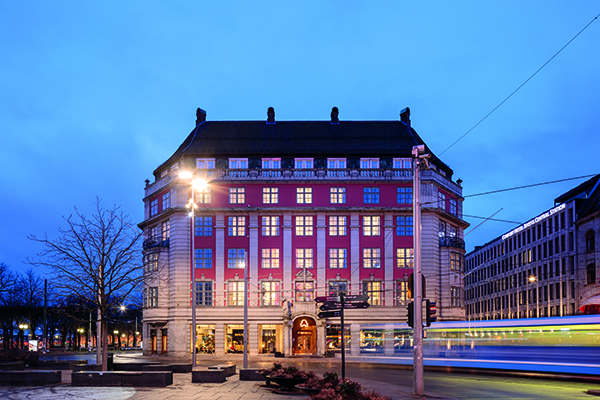 Amidst the growing intrigue about Norway’s increasingly dynamic capital, Oslo, Amerikalinjen has opened its doors. Occupying one of the city’s most recognisable buildings, the 20th century former headquarters for the Norwegian American line, this surprisingly intimate 122-room property is layered with equal doses of subtle nostalgic references and forward-thinking design, and is defined not only by its slick rooms, but a standout offering buzzy restaurants and bars. Home for locals and visitors, this progressive hotel sets the bar for a new chapter in Oslo’s burgeoning hospitality landscape.

Speaking to Premier Hospitality International about the project, Interior Architect and CEO of Puroplan, Jaakko Puro, said: “The brief was very extensive and incredibly detailed. The main idea of the brief presented the historical past of the Amerikalinjen building, the connection between Oslo and New York and the idea of travel and gateway to the world. During the different stages of the planning process, the brief evolved and included some modifications and alterations. For instance, in the original plan, the accent was on the style of the 1920s with its glamour and Art Deco elements. It then shifted towards a slightly modern scheme that is set in a unique historical setting.”

In prime position on Jernbanetorget Square, adjacent to the bustling Central Station in downtown Oslo and just a short stride from the up-and-coming Bjørvika neighbourhood, Amerikalinjen is in the best position from which to explore this flourishing city.

Prompting the hotel’s concept of ‘people in motion’ is its home inside the headquarters of the former cruise ship company, Norwegian America Line, which was designed by prolific Norwegian architects Andreas Bjercke and George Eliassen in 1919. Now, exactly a century later, the grand Neo-Baroque pile has been spruced up and polished by local firm Kritt Architects who, have carved out 122 rooms and suites and a series of humming public spaces that includes four restaurants and bars and Vistas.

Led by the building’s original façade and wide corridors, the rooms are appropriately defined by their high ceilings and commanding paned windows, while the suites boast original ornate ceilings. Helsinki-based studio, Puroplan has smartly created a sense of space by separating the bathroom with a decorative white opaque glass panel and adding a smoked-glass mirrored wall behind the bed.

These details also create a modern canvas for the collection of framed maps, photographs and old dining menus from the ships – uncovered during the building process – and for the furnishings, most of which are reproductions of original mid-century classic, like Veng, an armchair designed by Torbjørn Bekken in 1960; Briger Dahl’s Birdy table lamp (1952); and pendant lamps by age-old Norwegian glassblowing company, Hadeland, who also provided the ship’s original glassware.

In a first for Oslo, the ground floor and basement present a series of vibrant public spaces for guests and locals alike. With its own curb-side entrance, Atlas is an all-day brasserie that serves an eclectic blend of European favourites that have influenced New York’s culinary scene, while its grab-n-go corner offers accessible healthy options like house made soups, quinoa salads or traditional Norwegian waffles topped with a savoury twist.

At the centre of the building, in a former open-air courtyard that, thanks to the addition of a glass ceiling, has smartly been transformed into a light, plant-filled indoor space is the aptly named Haven. Here, while the day away tapping on your laptop with a cup of tea or coffee and a tasty snack from the afternoon waffle trolley, or on weekends, tuck into the brunch menu.

Named for the first point of entry in New York, after immigrant hopefuls got the nod from the authorities, Pier 42, with its low-slung velvet furnishings, parquet flooring and concealed lighting, is the perfect setting from which to sip on classic cocktails.

The culinary journey then rounds up on a meaningful note with Gustav, an intimate basement club inspired by New York’s jazz scene and the city’s famous speakeasy bars. Named after the Norwegian America Line’s founding father, Gustav Severin Henriksen, the venue has fast become a hotspot in Oslo for its stellar parties and cosy in-the-know gigs.

The responsible Interior architect for this project, Katri Laesvuori, from Puroplan, said: “We hadn’t worked in Norway before and it is always fantastic to be able to work on an international project of this scale. We feel fortunate to have been chosen for this project and did our very best to make it stand out from anything else that is designed in Norway at the moment.

“It was also very important for us to continue or great collaboration with Nordic Choice.”

Petter Stordalen, owner of Nordic Hotels & Resorts added: “Just like America was called the land of opportunity, today Norway has been given the same title; people are coming here full of the hopes, dreams and aspirations that we had when we left. We wanted to create a hotel that tells this story of ‘people in motion’ and to rejuvenate and bring life back to this historical building. This is a hotel not just for guests, but for everyone.” 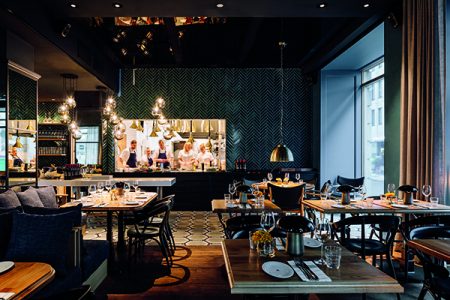 LS Entreprenør is a Norwegian-based contractor, specialising in the renovation of buildings. LS Entreprenør is particularly prominent in the hospitality industry working on restaurants and hotels but also has experience in the construction of new housing and commercial buildings.

The company was founded in 2006 by Per Solli and boasts a highly knowledgeable team with decades of experience in the industry. This means it is able to deal with complex projects and is able to build stable, long lasting relationships with clients. LS Entreprenør is available early in the development phases of project to ensure optimum financial choices.

In the hospitality industry alone, LS Entreprenør has worked on numerous restaurant renovations across Scandinavia. Some of the company’s clients include DNB Eiendom, Eiendomsspar, AB Invest and Choice.

LS Entreprenør was recently engaged as the main contractor for Amerikalinjen Hotel. This project encompassed transforming one of Oslo’s most recognisable buildings into an intimate hotel.

“We are honoured to be able to participate in building one of Norway’s best hotels. AS a company we take pride in being secure, precise and always completed projects within the required timeframe.”