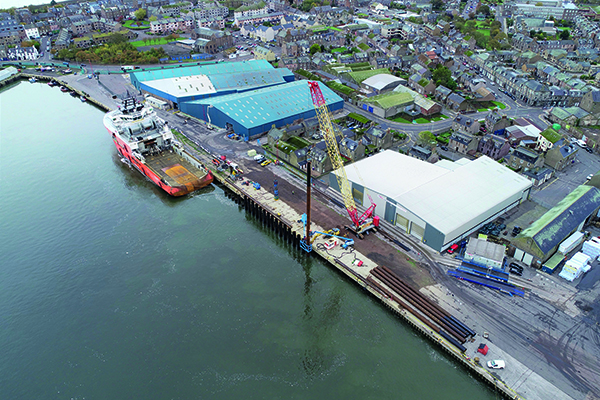 Powering ahead on programme is the £7.2m Montrose Port Berth 7 & 8 reconstruction project, which will ensure the port is well placed to handle an increasingly diverse range of shipping traffic and cargoes.

The project, being carried out by Farrans Construction, is set to be completed in Autumn 2019.

Farrans has a long-standing relationship with Montrose Port Authority, having carried out more than £13m worth of marine work for the client in the past 7 years.

The heavily used berths had become weathered and worn, as were the adjacent shore loading facilities. The works include the design and construction of a new 180m quay wall (90m for each of the two berths).

Neil McDonald, Contract Manager of Farrans Construction said: “This commenced with the installation of the combi wall made up of 1219mm diameter tubular piles of between 30 and 40 m long and 19m long Az18-700 infill sheet piles along the quay edge. The piles were installed using a new system operated by Trench Control limited, which involved using a new hydraulically operated gate system to guide in the piles, this allowed much swifter progress.

Further works included the installation of a new anchor wall with 660mm diameter x 13m long tubes and tie rods to connect the quay wall with the anchor wall. To achieve the quayside loadings there is also requirement to have part of the new deck slab supported on additional steel pilings formed of 339mm diameter tubes again ranging between 30 and 40m

With the piling completed Farrans will provide 5,400 sq m of new concrete hardstanding in a combination of ground bearing and pile bearing slabs which incorporate utility trenches and ducting, as well as a water main, quayside furniture, rubbing strips for berthing, cathodic protection and miscellaneous metalwork.”

The scheme, which commenced in autumn 2018, also includes the provision of a new heavy lift pad to complement other heavy lift facilities on the north quay.

The project is being carried out in two phases, with berth 8 being completed first (as berth 7 was in constant use). Berth 8 has just been handed over on programme and was in use within 10 minutes of completion.

Neil McDonald commented: “One of the most challenging elements of the project so far was initially working with the new piling system – however this was highly successful once we became used to it. A lot of work had already been completed to assess the level of the sandstone so that we could get the piling tubes cut to the correct levels, which reduced any trimming needed, greatly reducing wastage and speeding progress.

“The weather is always a challenge – particularly high winds and the presence of marine mammals such as dolphins in the water.”

The new upgrade will strengthen and deepen berths 7 and 8 on the north side of harbour, which will further enhance Montrose’s capability for handling larger vessels, including general cargo ships and those involved in the increasingly important oil and gas decommissioning sectors.

Nik Scott-Gray, Montrose Port Authority chief executive, said: “This ambitious new upgrade programme on the north quay will ensure port users have the best possible facilities and make us well placed to serve a variety of important marine sectors, including oil and gas decommissioning, offshore renewables and general cargoes. We offer a high level of flexibility for port users along with great customer service.”

In 2013-14, Farrans carried out the Montrose Berth 6 Renewal project, whilst in 2011, Farrans completed the £8m Montrose Deep Water Berth project – a technically challenging job involving the removal of an old, collapsed berth.

Montrose Port Authority is a thriving support and service hub for the North Sea energy and shipping industries.

Established in 1493, Montrose Port has developed over the centuries to establish its reputation as a leading centre of international trade and distribution throughout Scotland and northern England. The port is known for its flexible approach, and through its stakeholders  offers a broad range of port related services including agency, stevedoring, storage and bunkering.

Offering around 1000 metres of quayside on both the north and south side of the harbour, Montrose Port provides a sheltered haven almost half a mile long. Port facilities include water berths to a depth of 8m, 130,000m2 of open storage, 42,000m2 warehousing and over 2,000m2 of office space.