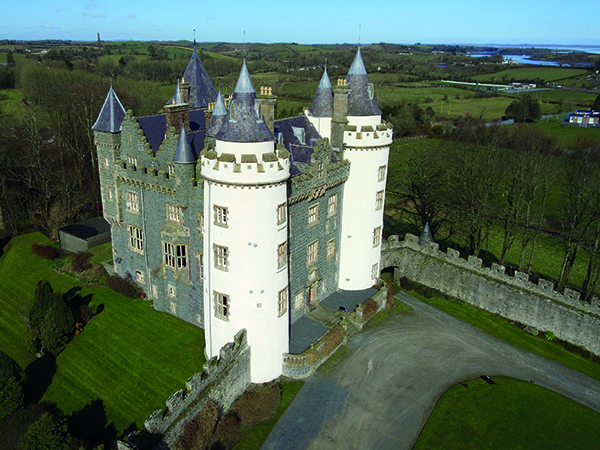 Dating from the 12th century, Killyleagh Castle is one of Ireland’s most distinctive historic houses and remains in private ownership of the Rowan Hamilton family. Located at the end of Plantation Street in Killyleagh, the castle is a grade A Listed Building, indicating that it is of great national importance.

In 1984 Alastair Coey Architects were appointed to conduct a detailed condition report, funded by the Environment and Heritage Service, to set out priorities for restoration. This lead to a programme of repair works – again undertaken by Alastair Coey Architects – which included dry rot repairs, roofing repairs, external restoration and conversion of gate house screen to holiday apartments, internal plaster repairs and the installation of damp monitoring probes.
The most recent phase of work cost £430,000 and was completed in June 2018. It comprised the re-slating and thermal upgrade of roof slopes including the replacement of lead weatherings and chimney repairs, the re-harling of the iconic flanker towers, an extensive programme of repairs to timber windows and isolated repairs to ashlar dressings and re-pointing of rubble stonework.
The building’s historic significance had not been compromised by contemporary additions or inappropriate repairs. Therefore a conservation-led approach of ‘Minimum Intervention’ was taken throughout the works. This meant that repairs were prioritised in order to arrest the degradation of the structure without compromising its significance. Any intervention deemed necessary was carried out using appropriate materials and methods. Due to the existing harling being in poor condition, the flanker towers were reharled using traditional lime mortar and decorated with specialist Keim breathable paint.

An extensive programme of repairs was carried out to the timber sliding sash windows and the elaborately detailed front door. The historically significant door was removed to a workshop where a mechanical methodology was applied to the door timbers and ironmongery to remove the existing coatings, enabling repairs to be carried out. Great care was taken to retain as much existing fabric as possible and, where new material was required, it was ensured that appropriate material and methodologies were utilised.

Decowell Restoration undertook the conservation of the timber surface and metal hardware on the historical door of the 12 Century Killyleagh Castle.

The timber was cleaned, consolidated at new joints and spliced infills. The infills were retouched using colour pigments. The door was varnished using an appropriate varnish system. The metal hardware was treated by appropriate rust removal using measured abraded mechanical methods. The brass lions head door knocker was conserved by mechanically removing the rust and tarnishing. Microcrystalline wax was uses to protect the surface.

Similar care was used in the repair and replacement of the roof coverings. The primary roofs to the front and rear were in poor condition, with slipped, cracked and missing slates and isolated failure of roof timbers. These roofs were stripped, with the condition of all existing slates being carefully checked and, where appropriate, stored for reuse. The roof was insulated at ceiling level, meaning that the thermal performance of the building was upgraded without any disruption to the external appearance of the roof slopes or internal finishes. Additionally, the roof voids are ventilated using the existing lead-lined ventilation dormers as opposed to the potentially visually obtrusive use of contemporary ventilation products to the eaves and ridge.

Before reslating, the existing roof timbers were treated for woodworm, with a limited number of splice repairs to rafters and wallplates. Any replacement slates were carefully specified to match the existing slates.

The current phase of works to Killyleagh Castle has been nominated for an RSUA Award. Last year Alastair Coey Architects were nominated for the refurbishment of Union Theological College, and in 2010 they were highly commended for restoration of the nineteenth century conservatory at Ballywalter Park, while in 2000 they received an RSUA award for the conversion and restoration of Belmont Gate Lodge for use as their own offices. Regarding the recent nomination they say “it means a lot to be nominated for an RSUA award. It is fantastic to be recognised by the industry and an honour to be among such illustrious company as RSUA awards nominees.” 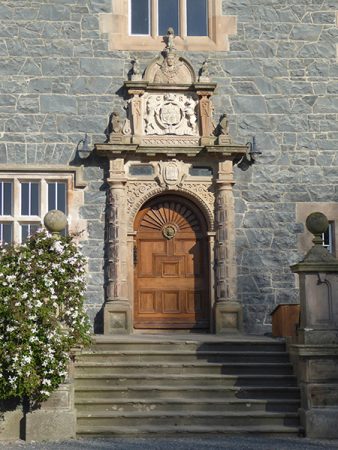