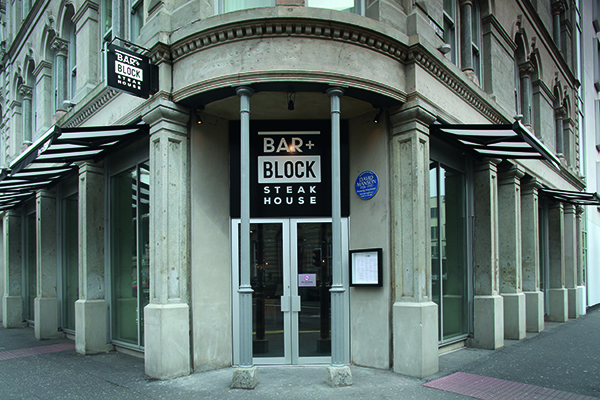 Bringing fresh new cuts to the city of Belfast is new kid on the block, Bar + Block Steakhouse. Making its Northern Ireland debut in Belfast’s Cathedral Quarter on Wednesday 24th April, the all-day dining steakhouse combines a destination restaurant with a bar that’s fit for any occasion.

Bar + Block Belfast is one of three new Bar + Block restaurants which hospitality giant Whitbread opened during the first half of 2019. The Belfast restaurant replaces the Four Corners restaurant, which occupied the site from 2009.

Speaking to PREMIER HOSPITALITY magazine, Hannah Schiavone, Senior Designer at Harrison Design, who acted as the project designer said: “The refurbishment was for the ground floor only and we’ve been able to retain much of the existing back-of-house facilities and function, with the exception of a new kitchen. The development was primarily cosmetic and our main focus was ensuring that we brought Bar + Block to life within the space.”

Working alongside contactors Myriad Construction, work on site began on 1st March 2019 and completed on 10th April 2019. Modern design has been inspired by the theatre of food and drink and includes a bar with copper detailing, reclaimed wood, comfy seating and warm lighting. The site also includes the brand’s signature neon cow, wall calligraphy detailing the brand story and colourful, contemporary artwork.

Hannah added: “Interior finishes consist of reclaimed scaffold boarding, brick and paint wall finishes. Floor finishes are a mix of wood and tile and the exterior of the building is stone, which has been retained as existing.”

A landmark building, The Four Corners building, which now houses Bar + Block and a 179 bedroom Premier Inn hotel, lay derelict in Belfast City Centre for 15 years before it was given a £15 million makeover in 2008. The building, which was commandeered for a military tribunal for the trail and sentencing of Henry Joy McCracken in 1798, was one of the last to be put up for development by the Langside Corporation.  It was then that it was transformed into a Premier Inn Hotel with an adjoining 200-seater restaurant and bar.

Whitbread, who own both Premier Inn and Bar + Block, opened their first hotel in Belfast on Alfred Street in 2007. They now have five Premier Inn sites in Belfast with the Cathedral Quarter Hotel the largest.

“It’s great to be able to get any project like this underway,” said Hannah. “Whilst some challenges might be similar, no project is ever the same. The development is a first for us in Ireland and we look forward to seeing how it will be received.”

At Bar + Block, guests can explore an ever-changing selection of hand-cut steaks, from rump to ribeye and sirloin to Bar + Block’s signature cuts like marinated spiral-cut sirloin. Steak aficionados can delight in the ‘Butcher’s Block’ featuring seasonal specials, each served with sumptuous sides like mushroom and truffle dauphinoise and sweet potato rosti.

The extensive menu doesn’t end at steak. Plates like grilled lamb souvlaki, handmade beef burgers and a signature Sunday Roast Sharer are all up for grabs, alongside lighter dishes including grilled tuna with chargrilled Mediterranean vegetables, roasted red pepper sauce and rocket. Even breakfast has been given the meaty touch – The Bar + Block Works and steak and eggs are perfect for lazy weekend brunching.

In a hurry? Bar + Block’s Express Menu, available from 11:30am to 5pm, Monday to Friday, will ensure rumbling stomachs are satisfied with a dish and a drink in just 10 minutes, for less than a tenner.

While the chefs fire up the grill, Bar + Block’s bartenders are on hand serving up a selection of craft beers and ciders alongside a carefully curated wine list, plus classic and contemporary cocktails, all half price from 5pm to 7pm, Monday to Thursday. Or end the working week with ‘Fizz Fridays’ when you can sip on a bottle of prosecco for just £15 all day. 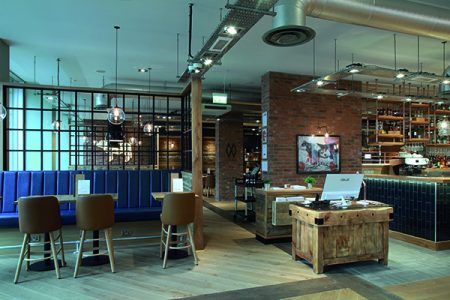