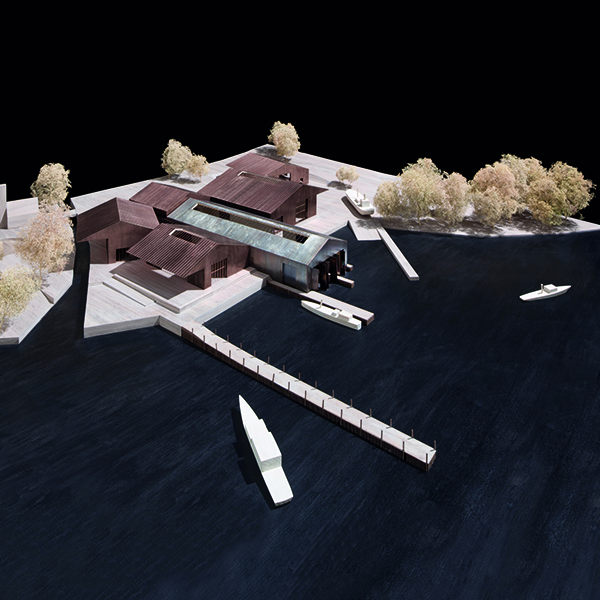 Recently opened by His Royal Highness, The Prince of Wales, the new Windermere Jetty Museum of Boats, Steam and Stories in the Lake District is a spectacular new attraction created in a £20m development worthy of its location on a World Heritage site.

Windermere Jetty is one of the first contemporary buildings to be constructed on the shores of Windermere in over 50 years.

A cluster of seven buildings, the new museum is clad in copper with sculptural silhouettes that frame stunning views of England’s largest lake.

A Boathouse sits at the heart of the composition where boats can be experienced in their natural context – on the water. The sculptural forms of the buildings make reference to vernacular Lake District buildings in their characteristic overhanging roof canopies, which extend the museum’s environment from inside to outside.

All walls and roofs of the museum are covered with oxidised copper to consolidate the whole architectural ensemble. It is intended that the copper will gradually weather over time and blend the appearance of the museum into the natural environment of the landscape setting.

Emphasis is placed on making a strong connection between people, boats and water, as well as providing a re-interpretation of the site’s industrial and picturesque heritage.

A series of new jetties on the lake allow visitors to sail on Osprey (1902), one of the museum’s fully-restored Edwardian steam launches and enables the regular lake cruise boats to dock and bring visitors to the museum.
With spectacular panoramic views onto the lake, the new lakeside café offers visitors traditional Lakeland recipes with a contemporary twist, showcasing the incredible local ingredients that Cumbria has to offer.

Rowan Seaford of Carmody Groarke said: “We won the commission to design the museum following an international RIBA competition in which there were 114 expressions of interest, which were narrowed down to eight design practices.

“The client’s brief was in some ways quite technical, as there were special environmental requirements relating to the way that the boats are kept and displayed.

“Our design emphasis was on creating a memorable visitor experience through a series of buildings set within a park landscape. We have endeavoured to create a connection between people, boats and the water and also provide a re-interpretation of the museum site’s previous industrial heritage.”

She added that the project’s location on the shores of Lake Windermere presented significant challenges both from a design and a construction point of view, with flood risk being a major consideration. A further challenge was the sensitive nature of the site being located within a UNESCO World Heritage site – which involved a great deal of discussion and co-operation with the local planning authorities.

All of the buildings are aligned to allow visitors views of the boats on the water and every building incorporates a large canopy extending the museum to the open air, whilst also providing shelter
Owned by Lakeland Arts, the collection of over 40 vessels is the only one of its kind in the world. For the first time over half of the collection, which ranges from Victorian steam launches to record-breaking speedboats from the 1980s, is now on display.

Vessels in the collection include SL Dolly, thought to be the oldest mechanically powered boat in the world, Beatrix Potter’s tarn boat which she used to sketch in, and the 50-foot luxuriously- designed Victorian steam launch Branksome (1896).

The museum also features a unique open access conservation workshop where visitors will see the team of skilled conservation boat builders conserve and restore vessels that would otherwise be lost to history.

Rowan Seaford concluded: “It was an absolute privilege to work on this project – a significant public building in such a special location – and we are immensely proud of our involvement in the scheme.”
Rhian Harris, Chief Executive of Lakeland Arts said: “Our design team have created an extraordinary museum which connects visitors with the collection, to the lake and with the wider Lake District landscape telling the incredible stories of those to whom Windermere has been so important.”