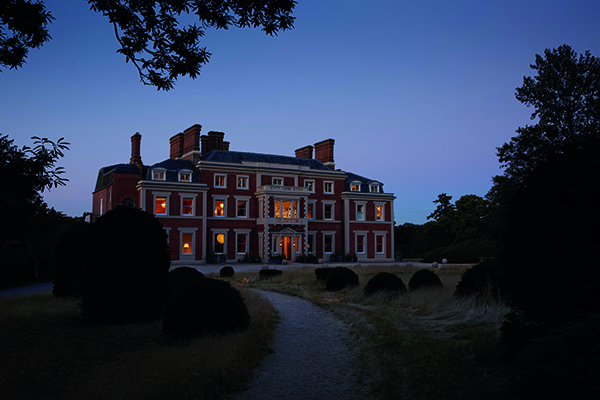 A place to feel at home.

Heckfield Place is a newly transformed luxury hotel based on a 430 acre site in Hampshire, completed by Spratley & Partners Architects in late 2018. A Grade II listed building, the project is the latest venture of the Chan family, of private investment company Morningside Group; a client who has been passionately involved at every stage of the project’s evolution since purchasing Heckfield Place, previously used as a conference centre and wedding venue in 2002.

Once home to antiquarian Horace Walpole, the author of the first Gothic novel Castle of Ortranto, the site also includes woodlands which were once an arboretum planted by celebrated horticulturalist, William Wildsmith, in the mid-19th century.

The house was extended in the 1980s without much care. It added a block of bedrooms and conference facilities which were small, basic and required substantial upgrading. The rooms in the listed building had also been subdivided, creating cramped spaces and disrupting the historical plan of the house.
The Morningside Group instructed Spratley & Partners to work alongside Watson Bertram & Fell to achieve planning for the site, which was granted by Hart District Council in 2009. Spratley & Partners took the scheme on through detailed design, and in line with the brief for an ‘effortlessly stylish’ country house of the highest quality, sympathetically refurbished it. 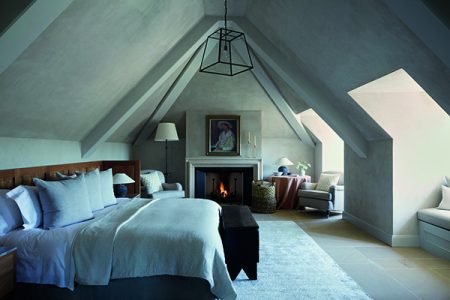 Heckfield Place now hosts 38 bedrooms, six Signature rooms and one two-bedroom cottage; all designed to feel intimate, familiar and homely. They range across six distinctive room types situated in the house, off the corridors and within the grounds. From ‘Friends’ rooms which are beautifully simple and cosy, to The Long Room with exposed oak trusses, a  distinctive bathroom tower and private terraces overlooking the lake.

For each room, the room typologies have been developed with the utmost attention to the guest experience and to create an intimate connection with their surroundings, from the indoor spaces to the sensitively restored walled gardens to the views across heathland and water.

The interior scheme focussed on reviving the house. The rooms have been restored back to their original proportions, fireplaces have been opened up and modern panelling and finishes have been stripped back in favour of revealing the original, historic features.

In order to deliver the features required by the brief, sensitive interventions took place including the insertion of new steelwork into the floors between the historic timber joists to carry the weight of the cast iron baths and M+E systems, which have been carefully designed to integrate with the existing fabric.

Interior designer Ben Thompson (a young protégé of Ilse Crawford) has captured the client’s vision of creating a country home with a connection to the surrounding land. Overall, the resulting colour palate is a calming mix of muted greys, greens and blues, while the materials are rough and organic, including bare brick and lime plaster walls and natural timber floors. The use of British artisan suppliers was also an essential part of the project to make Heckfield Place more authentic in its design. 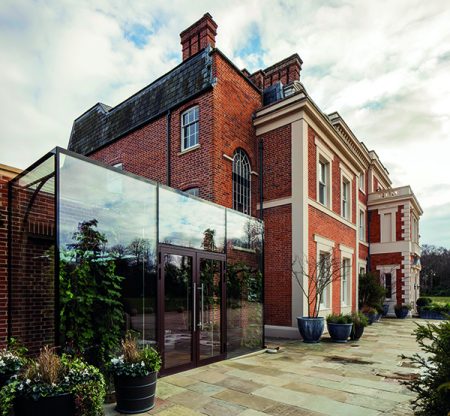 The refreshed scheme includes a restaurant separated from the manor house by a structural glass link. Also included is a new basement area constructed below the front driveway, within 4 metres of the listed façade, accessed via a sweeping cantilevered stone staircase with bronze balustrades and Cotswold rubble stone walls. The basement houses the impressive 67-seat screening room and associated facilities, including back of house areas and plant.

Heckfield Place includes two new restaurants and a private dining room, the designs of which have been carefully developed alongside culinary director, Skye Gyngell. The farm, kitchen, gardens and orchards supply produce for the restaurants and flowers for the rooms, based on bio-dynamic farming principles.

The hotel also includes a number of treatment rooms and a cottage within the grounds for more guest accommodation. A separate energy centre building with biomass boilers has been constructed to serve the hotel, designed to reflect the form of the original water tower on the site.

Additionally on the external site, the landscaping has been successful and has created a number of different environments for guests to enjoy and engage with; including woodlands, lakes, orchards, gardens and greenhouses. The gardens adjacent to the hotel have been re-landscaped to create terraces for direct access from the ground floor rooms, with intricately restored garden walls.

Very few changes have been made externally to the listed house, with the exception of the exterior stonework being painted and original windows have been restored. The reconstructed accommodation buildings have also been designed to match their surroundings as far as possible, with handmade Flemish bond brickwork, clay roof tiles and bespoke hardwood joinery.

To discover more, or to book your stay, visit: https://www.heckfieldplace.com/