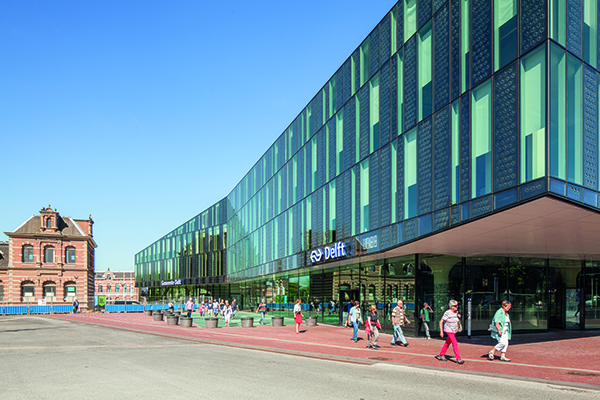 Mecanoo architecten, officially founded in Delft 1984, is made up of a highly multidisciplinary staff of creative professionals from 25 countries. The team includes architects, engineers, interior designers, urban planners, landscape architects and architectural technicians.

The extensive collective experience, gained over three decades by the whole team, results in designs that are realised with technical expertise and great attention to detail. Mecanoo’s projects range from single houses to complete neighbourhoods and skyscrapers, cities and polders, schools, theatres and libraries, hotels, museums and even a chapel.

Kaohsiung is not only the second largest city in Taiwan and one of the world’s largest sea ports, but it is also host to a dramatic sub-tropical climate of typhoons, high temperatures, heavy rainfall and regular earthquakes. The new 140,000 square-metre performance complex must cope with all of these extremes.

Despite its size, the 1,981 seat Concert Hall has an intimate feel. Mecanoo chose the shape of a stepped vineyard with a stage at its centre so that terraces at different floor heights encircle the podium. The public enters the oak-lined space from the ground floor and spiralling ramps lead them to their golden seats.

The 2,236 seat Opera House is arranged in the form of a horseshoe with three circled balconies. The seating is upholstered in a mixture of red and purple fabrics with a pattern of Taiwanese flowers, contrasting with the darker walls.
The Playhouse, with 1,210 seats in Mecanoo Blue, is designed to host a variety of drama and dance performances. Flexibility is the core element in the design of this multifunctional space. The layout is adaptable and can be changed from a typical proscenium stage with the audience in front, to a thrust stage with the audience on three sides.

With its asymmetrical composition and seating across two levels, the 434 seats in the Recital Hall have the same golden fabric and oak lined the walls as the Concert Hall. The upper part of this hall is enclosed by a circle sound of absorbing curtains, allowing for the reverberation time within the space to be turned to specific types of performance.

Arriving in Delft is an unforgettable experience. From the outset, Mecanoo’s idea was to design a station that makes it clear to visitors that they have arrived in Delft. The station, in combination with the new city hall, sits atop a new train tunnel built in place of the old concrete viaduct that divided the city in two since 1965.  Coming up the escalators, the impressive ceiling with the historic map of Delft unfolds. When you look outside, you see the city and the old station as a contemporary version of Johannes Vermeer’s paining ‘View of Delft.’

The twelve-storey building has more than four hundred workplaces and accommodates the national representatives for the EU Members States and three non-EU countries, supported by an administrative department. The building is an elegant composition of two volumes: the high-rise tower facing the Johan de Wittlaan and the low-rise plinth on the park side. The rhythm of pure white composite façade elements gives the building a timeless, classic beauty. The windows are subtly tilted horizontally or vertically, thereby reflecting both the sky and the surrounding landscape. 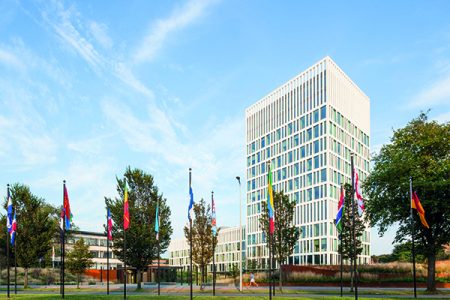 The higher levels feature a contemporary office environment that encourages cooperation. The carefully detailed interior is characterised by an abundance of daylight, the use of a rich variety of natural materials, delicate motifs and soft colour. Graphic patterns on the glazed meeting room portions allow daylight to pass through and create visual connections, while safeguarding privacy.

The guiding design principle was to create a house that combines transparency with sustainability, forging a strong relationship between the villa and the landscape. The harmony between landscape and interior, architecture and nature, was a key design determinant, particularly regarding sight lines, materials, colours and lighting. The house is designed from the inside out, creating uninterrupted views to the surrounding nature while providing shelter and intimacy.

The villa is situated in The Lakes by Yoo. Terraces on two different levels connect the villa to both the land and the water, anchoring the house in nature and giving it a welcoming presence. Glass corner windows in the living room, kitchen and other rooms make the residents feel like they live on the water.

Hulme Living on Leaf Street is the fourth generation in urban housing development that combines apartments and single-family homes in one building mass. On the south-eastern side the plot borders the main access road to the neighbourhood and other buildings from Manchester Metropolitan University. Appropriate to this scale, the residential complex extends to five levels of apartments. The compact building volume meanders across the plot and gradually decreases in scale to the north. The three-storey family houses on this side of the development are on par with the adjacent 1930s dwellings. The brick building acts as a connecting element between the various structures bordering the plot. 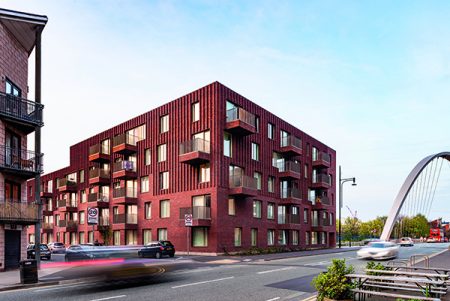 Located in the city’s eastern Longgang district, the Cultural Centre contributes a rich and varied cultural programme housed in an iconic urban location.

The in-situ concrete structure was carefully designed to become part of the visitor’s experience; wandering through the building is like viewing a cast concrete sculpture from the inside. The structural façade of each volume integrates beans, columns and massive concrete cores, resulting in a building where everything is revealed. The full-height tilted interior spaces at the edge of the volumes become architectural highlights where the visitor can experience the impressive scale of the construction elements.