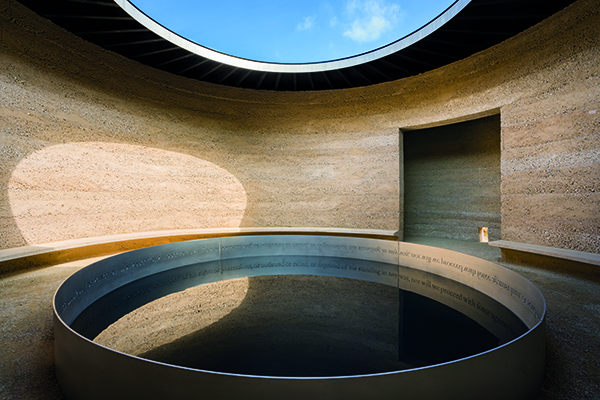 Contemplating the beginning of democracy

Writ in Water is a major architectural artwork by Mark Wallinger, in collaboration with Studio Octopi, which provides a new immersive space for contemplation and reflection at Runnymede, Surrey.

Opened in June of this year, Writ in Water is open seven days a week and is free to enter.

Over 800 years ago, the feudal barons forced King John to seal Magna Carta at Runneymede, a founding moment in shaping the basis of common law across the world. Therefore, Writ in Water celebrates the enduring significance of Magna Carta.

Set in the heart of the ancient landscape, Writ in Water reflects upon the founding principles of democracy and through a meeting of water, sky and light, providing visitors with a space for reflection and contemplation.

PREMIER CONSTRUCTION spoke to James Lowe from Studio Octopi about how they constructed an unusual build such as this. Talking about the beginnings of the project, he said:
“We completed a project called the Delphina Foundation and Mark Wallinger was one of the trustees of the foundation and he’d seen the project and liked it. When he got chosen by the National Trust to do the artwork for Writ in Water, we were brought on board because the National Trust realised this project stood between art and architecture. Mark contacted us to see if we’d be interested and we said we’d be delighted and it went from there.

“Mark had come up with a concept which we really liked, which was this idea of a really simple labyrinth with Clause 39 Magna Carta reflected in a central pool and then from our point of architecture it was about agreeing the specific site for it, choosing materials and setting it out, which we collaborated on.

“We decided to use cubits as a way of setting out the building as they have historical significance; it’s the most ancient form of measurement and that gave it the historical grounding.”

The interior design of Writ in Water was inspiration drawn from Clause 39 of the Magna Carta and the fundamental principles of justice it embodies.

An exterior doorway leads to a simple circular labyrinth, in which the visitor can choose to turn left or right to reach an inner doorway that opens out into a central chamber. The sky looms through a wide oculus above a pool of water, and the sides of the pool are inscribed on the inner side. With the water reflecting, like the seal on Magna Carta itself, the reversed and inverted lettering of Clause 39 is revealed as visitors move around the pool.

James added:  “We looked at materials for the walls and we wanted it to feel part of the landscape. As there are numerous gravel pits in the area, (where they are extracting gravel and sand from the river bed), we thought it would be better to utilise those materials rather than having to import soil from elsewhere. We did a few test samples of the material, compacting it together in moulds with a little bit of cement to help with the longevity of the building, and installing the mix in layers 1 cubit high.

“Really, the biggest challenge how the weather affected the amount of water when mixing the materials on site. On a dry day, moisture was taken out of the material on site too, so it was harder to work with and too brittle meaning more water had to be added.

“The feedback has been positive so far, which is good as there are lifelong members of the National Trust. During the build, there was very limited information about what was going inside it. From the outside, it’s quite a raw building but as soon as people step inside, they’re just blown over by it because it is quite a magical space inside and you don’t get any of that from the outside.

“Getting the positive public feedback and seeing people really take to the scheme has been the best bit about it. This was a bold move by the National Trust as it is their first permanent art installation; people expect them to just be looking after places rather than doing anything new, but this is encouraging people to explore a very historic landscape and telling a bit more of the story of Runnymede and the Magna Carta.”