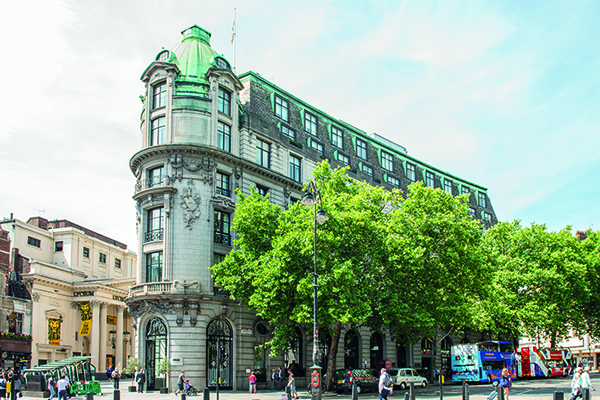 When One Aldwych first opened its doors to the public in 1998, it set a benchmark for other hotels to follow with its striking design and warm, professional service.

Some two decades later, the hotel has just completed a multi-million pound refurbishment project that is set to once again reaffirm One Aldwych as the most sought-after leading independent hotel in London.

Robert Angell recently spoke to Premier Hospitality about the work:

“The client wanted the hotel to retain its Britishness and sense of style. When One Aldwych first opened, it really made everyone prick their ears up because it was so fresh and new as a hotel concept and design. It became a frontrunner in thought-through, bespoke hotel design.

“One thing that I think needed to be achieved with the new design was to provide something that would become a classic in time. It’s a very beautiful hotel and we wanted to make sure that beauty was brought through in the styling, furniture design and interior design. We wanted to layer that on with classic upscale pieces to essentially evoke the style of a grand residence.  We want to make sure it’s a classic for another 20 years.

“We have very luxurious details in the way that we use are finishes. We used a champagne brass, for example, to finish a lot of the furniture and have introduced a miniature bullnose double moulding to the walls. The majority of the textures and materials have been sourced from the UK and Ireland.”

The landmark building that the hotel occupies was created by Anglo-French architects Mewès and Davis in 1907 for The Morning Post newspaper.

Simon Hirst, the hotel’s opening General Manager for 10 years, has returned as Managing Director after four years at Raffles Hotel Singapore to oversee the renovation. The full hotel team continued to be employed throughout, meaning on reopening the hotel’s exceptional level of service is once again being delivered by familiar, friendly faces.

Reflecting on the significance of the project, Robert concluded:

“It’s a very proud moment in my company’s history; to work on such an iconic building for an amazing client. It’s been an absolute privilege and something I am very proud to have achieved.” 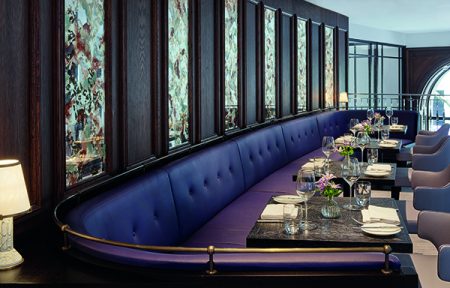 Noble Russell has produced outstanding bespoke furniture for the One Aldwych Hotel and the Indigo Restaurant.

Noble Russell was recently commissioned by main contractor WFC Contractors but also directly by the clients to work with Fabled Studio to develop and produce banquette seating, chairs and tables for the Indigo Restaurant, the bar and the lobby space areas.

The Indigo restaurant’s executive chef, Dominic Teague has transformed this restaurant’s menu and now Fabled Studio has transformed the interior into an informal and chic space with the furniture central to its design. The bespoke chairs and banquettes, upholstered in various shades of mauve and lilac leather along with darkly stained Oak, a white ceruse finish and detailing in brushed antique bronze, complete this striking, distinguished interior.

The lobby and bar areas, just below the Indigo restaurant mezzanine are as the London Evening Standard says “probably the most beautiful hotel lobby bar in London”.

For the lobby area, Noble Russell has made 28 lounge chairs and sofas in many sizes with the curved form to these items providing some challenges. The upholstered furniture has a mixture of complimentary leathers and fabrics. One particular favourite is the luxurious Mohair velvet.

With sleek 1920s curves and detailing to the carefully developed designs and construction, Noble Russell has helped create a furniture collection of understated glamour befitting this historic and impressive space.

The furniture was completed and installed by Noble Russell’s professional team on time and within budget. The company looks forward to working with One Aldwych again.

Noble Russell is a contract furniture company specialising in the creation of exceptional bespoke products. The company has dedicated itself to over 25 years of furniture design and production, providing customers with the highest quality service.

More information on Noble Russell can be found at www.noblerussell.co.uk. 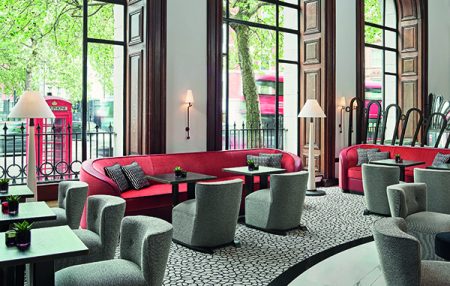 Ben Whistler is responsible for the exceptional quality furniture specified by some of the world’s most respected interior designers. From one-off pieces for a private residence to multiple items for hotels and restaurants, the company has built a reputation on craftsmanship, quality and detail.

Drawing on decades of experience, Ben Whistler is able to build strong relationships with clients and offer trusted advice.

The company recently supplied all the loose furniture for the refurbished bedrooms and suites at One Aldwych. Ben Whistler provided upholstery and cabinetry pieces made to more than 30 different designs, including sofas, tables and beds.

The company has previously supplied furniture to a number of high-profile hotels such as Claridge’s, The Berkeley, The Savoy, The Connaught and The Mandrake Hotel.

A spokesperson for Ben Whistler commented:

“It means a lot to have the privilege of showcasing our craftsmanship in some of the most beautiful Hotels around the world.

“As a company we take pride in our commitment to providing an excellent service that matches the outstanding quality in the furniture we manufacture.” 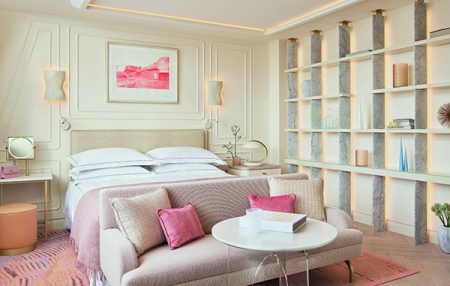