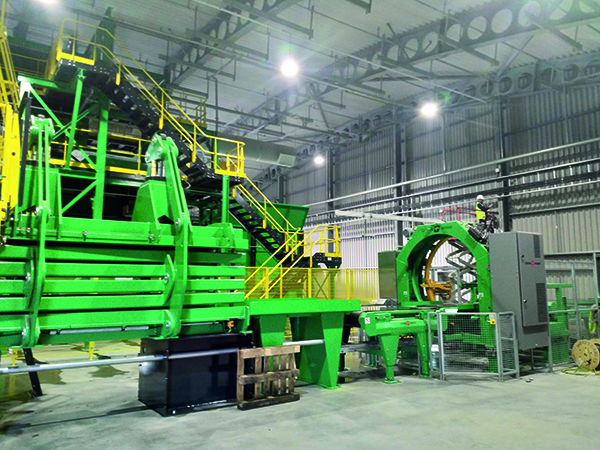 The transfer station, which opened in 2018 and was completed by local firm Geomarine, on behalf of main contractor Amec Foster Wheeler (AmecFW), processes waste prior to being exported for energy recovery or recycling. It has the capacity for up to 26,000 tonnes of residual waste, as well as 4,000 tonnes of food and 2,500 tonnes of glass.

It receives general refuse from the island’s 26,000 households and local businesses. This material is used to produce a refuse derived fuel, or RDF, suitable for export to an off-island energy recovery facility to generate heat and electricity.

Incoming waste initially goes through a mechanical shredding process, before undergoing magnetic separation to remove metals for recycling. It is then formed into bales, of approximately one metre cubes, wrapped in plastic film and loaded onto shipping trailers. On average, around four trailers a day are exported to the UK, using spare return capacity on existing freight services.

The transfer station also receives food waste, which is collected separately from general refuse. This is pre-processed at the new facility and put into tankers, ready for export to the UK for energy recovery and recycling. Specific odour control measures have been put in place throughout the site.

Glass is also delivered to the transfer station, in preparation for export and recycling.

The project also involved the general development of the Longue Hougue site. That included installation of services, drainage and access roads; creation of a three metre high flood protection bund around the entire south east corner of the site and general landscaping.

The Longue Hougue site itself has been reclaimed from the sea. It has been formed by creating an engineered perimeter wall, made from rock, which has then been infilled using material from local building and demolition projects. To support the transfer station building, steel piles were driven into the base material, to a depth of up to 28 metres, until they reached the bedrock beneath the site.

The Household Waste & Recycling Centre was completed by local construction firm J W Rihoy & Son, who were awarded the contract following a competitive tender, in which a number of local firms were invited to submit designs.

Opened in May 2019, the £2 million purpose-built centre is located to the south of the transfer station, and replaces a temporary recycling site at Longue Hougue.  The materials collected include scrap metal, polythene, old electrical appliances, bicycles, batteries and rigid plastic.

There is also a repair and refuse element so unwanted items that are still in good condition can be given a new lease of life. This operates as a social enterprise partnership.