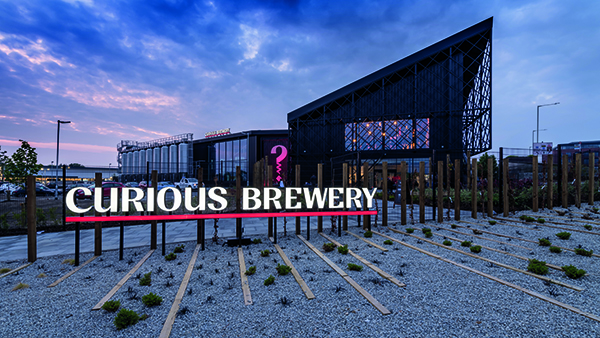 These days’ new breweries are commonly built on light industrial estates on the outskirts of town. They are productions warehouses, often tucked away and difficult to get to. In May 2019 however, a new brewery opened with a completely different approach. The Curious Brewery, a brand new state-of-the-art, multi-million pound ‘cathedral of brewing’ opened right in the heart of Ashford, Kent, directly opposite the railway station.

The brewery has a bar, first-class restaurant and gardens inspired by the Kent landscape to relax in.

Located on the ground floor is a 1,000sq ft shop, bar and hosting area for tours. Spectacular landscaped kitchen gardens taking inspiration from the Kent coastline at Dungeness Headland and the raw hop and barley ingredients of Curious beers, alongside a waterfall feature cascading from the front of the brewery, completes the ground floor.

In the luxury private dining room, once a week, guests will have the opportunity to book onto special master-classes hosted by one of the brewery team featuring a bespoke menu from the kitchen, each carefully paired with a beer from the Curious range to showcase the quality local ingredients.

The new brewery takes inspiration from the tourism experiences offered at the Chapel Down Winery. Curious’ Cicerone-trained team will host small group tours of the brewery facility that will tell the full field-to-throat story of their range of premium beers and ciders. Curious guests will be taken on a journey through the production side of the brewery before sitting down for a tasting of the core range and any limited batch beers straight from the tanks to ensure the freshest and best quality beer is enjoyed by all.

The building, set in a 1.6 acre site, houses a total of 19 fermentation tanks, with a total capacity of 2,900hl, meaning that the brewery can hold almost 500,000 pints of beer at any one time.

Beer is kegged and bottled on site, producing more than 4,000 bottles per hour in bespoke Curious bottles. In addition, un-pasteurised beer is piped directly to the restaurant from Bright Beer tanks on-site, ensuring the freshet and best quality beer to visitors.

The new Curious Brewery is also set to transform the brand’s production. The 50hl 5-vessel Brewhouse enables the team to more than quadruple its current total brewing volumes, producing approximately 80khl of beer, or more than 4.5m pints per year. Despite this increase, the site still allows them to stay incredibly versatile by brewing smaller batch sizes for improved freshness and quality.

Curious Brew Managing Director, Gareth Bath said: “This is a cathedral of brewing in every sense. The soaring point of the roof has spire-like qualities, the people who work with and for us have a devotion I’ve not come across before and we hope that the congregation of Kentish and British beer-lovers will come and visit regularly.

“We want the Curious Brewery to be both a one-off experience and a much-loved and much-visited local venue. If you live locally in Kent or Sussex, we hope that Curious Brewery will become somewhere you consider again and again for drinks and for dinner. And because we’re right by the station in Ashford, if you’re coming from London, we’re only half an hour on the train from King’s Cross!”

Head Brewer Matt Anderson added: “Being involved in the building of a new brewery is any brewer’s dream, not least because we’ve been able to stipulate every detail of the brewing process. This means having things like a specially designed Brewhouse with an external calandria design that gives us increased control on the boiling process, allowing us to consistently brew beers of the highest quality.
“Our whole focus is on serving the changing expectations of modern premium and craft-beer drinkers. So, as well as brewing the core range of Curios Brew, Curious Session IPA, Curious Porter and Curious Apple, we’ll also be making regular limited editions, both with our team here and occasionally with other like-minded brewers and customers who share our philosophy.”