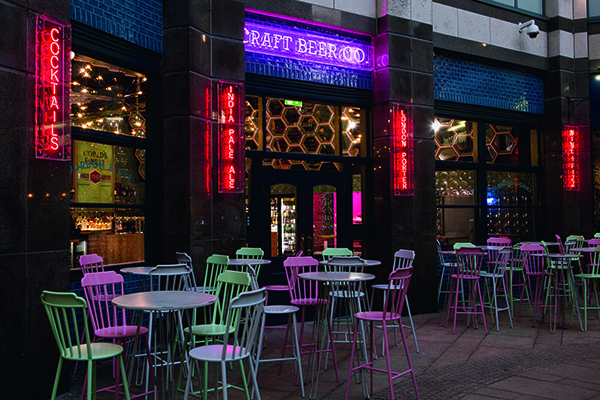 The Craft Beer Co has opened a new site at The Broadway, Hammersmith, opposite The Eventim Apollo Theatre.

Founded in 2011 by Martin Hayes (with his childhood friend Peter Slezak), the Craft Beer Co was the first pub group in London dedicated to good beer and led the way in creating a dramatically changed pub landscape in the capital and beyond. Since starting in 2011, Craft Beer Co now has eight pubs dotted around London and one in Brighton. Their mission is to provide outstanding service alongside their handpicked selection of beers, wines and spirits.

Commenting, Hayes said: “This new project follows a very busy 2018 where we purchased our first freehold properties and carried out three substantial refurbishment projects of our pubs. This is a very significant moment for us; it’s the first time a landlord has approached us to partner with them and it’s also bringing our offer into a former big pub co site in a transport hub for the first time.

“This project excited us as it gave us the opportunity to partner with a motivated landlord and anchor a regeneration project of a struggling part of the Broadway complex. We are very proud of our ten year journey. We are debt free and 100% privately owned and are still pushing boundaries as London’s Number One pub group with a focus on beer and real hospitality.”

At Craft Beer Co Hammersmith, guests are offered a vast ever-changing selection of keg beers from all over the world, as well as some regular house favourites. There are also six cask pumps with continuously changing cask beers sourced from the finest, independent micro-breweries from all over the UK. Finally, Craft Beer Co stocks the latest and greatest bottled beers and are constantly adding to their range so there is always something new on offer.

As well as a wide selection of beers, wines and spirits, Craft Beer Co Hammersmith also offers a selection of food and bar snacks. Guests can tuck into monthly burgers including the Cheese & Bacon; a rump beef patty severed in a brioche bun with shredded lettuce, red onion relish, pickles, smoked back and a choice of mature cheddar, stilton or emmental. Heat; an all-rump beef patty double dipped in hot buffalo sauce served with cheese, shredded lettuce, red onion relish and pickles or the Cluck; prime free-range chicken breast, brined in house to ensure a moist tasty burger, served with shredded lettuce and honey & mustard mayonnaise. There is also a selection of side dishes including house chips and onion rings as well as a selection of salads including Avocados & Mango and Zest Quinoa.