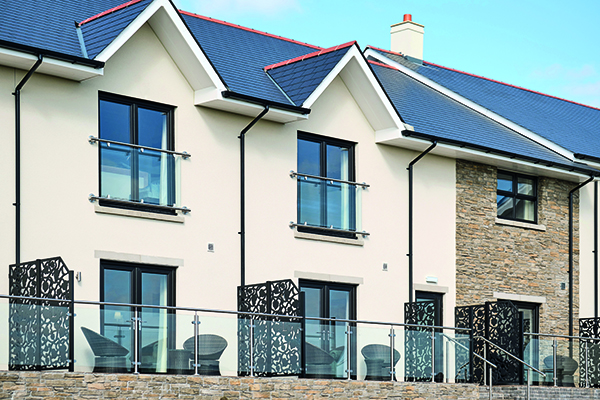 Llanerch Vineyard in South Wales has opened a 26 bed hotel. The vineyard was bought by Ryan Davies in 2010 and it is claimed that the vineyard is the first to have opened a dedicated hotel in the UK.

The two storey hotel has a total of 26 en-suite rooms ranging from Superior King to Courtyard rooms and Suites, each with uninterrupted views of the Welsh countryside. Each room has a large widescreen smart TV, a Nespresso Coffee maker, kettle and luxury interiors including Welsh wool blankets made at the woollen mill Melin Tregwynt and art by local photographer Andy Stoyle. There are also accessible rooms and dog friendly rooms as well as meeting and conference rooms for corporate events. The vineyard also hosts tours, tastings and weddings and operates a restaurant and bistro.

The hotel was constructed using only local contractors and builders and as part of the work, the vineyard’s existing courtyard rooms, set in one of the vineyard’s original stone buildings, were fully refurbished in-keeping with the new hotel.

Llanerch Vineyard is one of the oldest in Wales. Located North West of Cardiff, just outside of Hensol, the first vines were planted back in 1986. The vineyard now produces wine under the brand name Cariad Wines with a total of 10,000 bottles produced each year.

PREMIER HOSPITALITY MAGAZINE spoke to owner Ryan Davies about the hotel in a bit more detail.

How did this project come about?

“We bought the site from receivership in 2010 and at that time there was an old farmhouse on the vineyard which had been converted into a small bed & breakfast. We bought the site with the plan of putting a restaurant on it and using it for events and functions and we did that but slowly and surely, the demand grew so we needed to expand the restaurant and go down that avenue. We grew with the demand by putting an extension on the restaurant, purchasing a marquee for weddings and building an events room but with only 11 rooms on site we felt like we were really missing out on some business. We therefore decided to expand and build the hotel. It wasn’t an easy process but two years ago we broke ground and have just opened our 26 rooms.”

Is the hotel a new build element to the site?

“Yes it is. Whilst it is connected to the existing building it is a new build element. We self-built the hotel ourselves and used a project manager from Edge Construction to project manage everything.”

How was the building aspect of the project?

“Ever since we started, and even before this project, we had always done our own projects and we believed that we could save a lot of money by doing self builds. When we came in and got it quoted by other builders it was working out at 20% more than what we had worked it out as so we have saved ourselves some money by doing it ourselves.”

In terms of the interior, did you have a clear idea of how you wanted it all to look?

“What we knew was that we had travelled quite significantly around the world and one of the things that is key to us is an outlook from the rooms; so we wanted people to be able to look out over fantastic views. Keeping that in mind we made sure that we located the building so every single room has a fantastic view. We also wanted all of the rooms to be very spacious and offer a five star, luxury feel.”

“It has all been amazing and we have had nothing but amazing feedback. Everyone has been blown away by it and say they weren’t expecting it. As we were building, it was screened off and somewhat hidden so a lot of people were really surprised when we announced it because they didn’t know the building work was going on.”

What does it mean to you to have this project completed?

“It actually means a lot. It has been a real struggle over the last few years trying to run a business and juggle a project and it is really nice to now have it completed, opened and to see people using it.”

GRJ Interiors is a specialist in dry lining, render, painting and decorating. The company has been in operation for over 4 years and has built a reputation for providing a high-quality level of craftsmanship.

GRJ Interiors has recently been involved with the newly opened Llanerch Vineyard Hotel. This involved providing the stunning new venue with dry lining, rendering and decoration. Others clients and high-profile projects for the business include Edenstone Homes, 72 apartments at Olympia House for RHP Properties and the Blackwater Arts Gallery for Jamie Aherne.

“As a company we take pride in providing our clients with excellent customer service, never letting those clients down and always producing a very high standard of workmanship.”