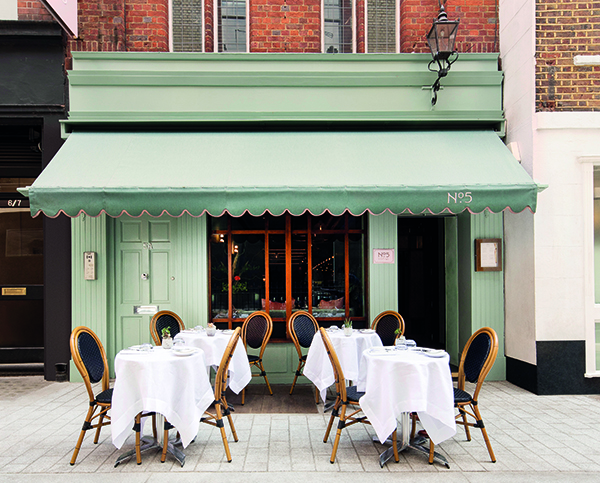 Refreshed, rejuvenated and stylishly re-designed following six successful years of trading as Little Social, the newly named No.5 Social in the heart of Mayfair recently opened after a major refurbishment.

The restaurant interior by Rosendale Design, with Interiors UK as main contractors for the fit-out, creates a relaxed yet elegant dining space. The 60-cover restaurant is much brighter than previously and features a neutral colour palette with accents of earth tones, pale pinks and lighter green tones, creating a welcoming atmosphere.

Rattan light fittings and timber feature panels imbue the restaurant with a natural warmth while the intimate banquette seating has been reupholstered with a stylish duck egg blue fabric.

In addition to the main dining area, the restaurant also features a small yet atmospheric counter bar, serving serious cocktails and world wines.

Dale Atkinson of Rosendale Design said: “I originally designed Little Social five or six years ago and the owner decided it was time to freshen up the space, so we were invited to design the interior. It was quite interesting to dissect my original design and create a new one.

“We used a lighter fresher warmer palette using mint green painted plaster on the walls, together with new rattan panelling and teak frames. We also introduced LED lighting into the ceiling coffers which really helps to illuminate the rear of the space. In general all of the lighting has been replaced and we also introduced wicker lampshades and new brass lights on the walls.

“The furniture has been replaced with slightly larger, more comfortable furnishings. This includes banquettes upholstered in light green fabric and chairs in a darker green velvet, complimented by pastel pink cushions.”

Other key design highlights include two backlit feature mirrors and rattan panelling down the side of the staircase.

One of the biggest changes is within the WCs, which were stripped out and luxuriously fitted with tiles, backlit mirrors, new wallpaper and rattan detailing.

The kitchen on the lower ground floor was also completely stripped out and re-fitted, much to the delight of the venue’s chefs.

Dale Atkinson concluded: “One of the major challenges of the scheme was the tight timeframe of only three weeks to complete the entire fit-out, so we had to have many items built off site and brought in. Great co-ordination was also needed to orchestrate the works within a relatively small space.

“Interiors UK did a fantastic job. The client, who was very happy with the scheme, recently had their soft opening and so far the new design has been very well received by customers.”

Formerly, Senior Sous Chef at Atherton’s Michelin-starred Pollen Street Social, Kostas has worked in some of the UK’s finest establishments including The Ledbury and The Fat Duck. The new menu draws from Papathanasiou’s wealth of experience and focuses on accessible, seasonal ingredients while championing the best of British produce.

“My passion for the British seasons shines through the menu at this unique little restaurant tucked away on our little street in Mayfair. After the substantial refurbishment No.5 Social delivers a warm and welcoming atmosphere whilst retaining simplicity and elegance.”

No 5 Social is owned by Jason Atherton, whose ‘The Social Company’ has grown into a globally renowned restaurant group, with a portfolio of restaurants which include the Michelin-starred Social Eating House and City Social, as well as Hai Cenato, Social Wine and Tapas and Berners Tavern – named ‘the defining restaurant of the decade’. 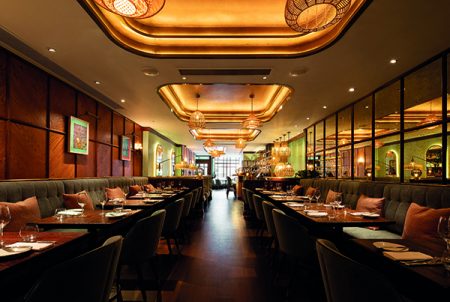 In operation since October 2004, Interiors UK has established a strong reputation as professional, client focused business. The company has an excellent health and safety record and is an approved member of the Safe Contractor scheme.

Interiors UK also has a strong relationship with Chef and restauranteur Jason Atherton. The company recently acted as the main contractor for his new venture, No. 5 Social. The project involved fit-out of the ground floor and basement areas, including extensive alterations and re-finishing of floor, wall and ceiling finishes.

“Jason is a special client and appreciates great design and workmanship. It’s a real privilege to be involved with Jason on his projects. His passion and attention to detail always make for great projects and they all have a unique and different feel from the last. This makes the experience a real joy and something to be proud of when we achieve what Jason and his team has visualised.

“We pride ourselves on delivering our projects on time, budget and to the highest quality standards whilst maintaining a safe working environment.”