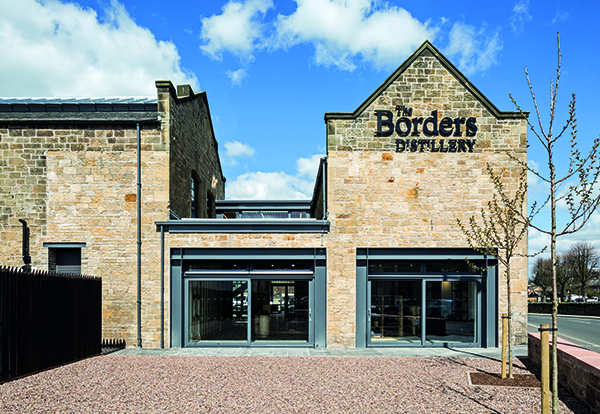 The Borders is the first working whisky distillery in the Scottish Borders for nearly 200 years. Gray Macpherson Architects (GMA) was appointed by The Three Stills Company (TTSC) in December 2015 to design the distillery in the old mill town of Hawick.

Since its completion the distillery has been recognised with multiple awards. It was named AJ Heritage Building of the Year 2018 and won ‘Best Commercial Renovation 2016-2018’ at the Borders Design Awards. This year, The Borders was a Civil Trust Winner.  Additionally, it has also won  the RIAS Conservation and Climate Change Award 2019, and the EAA Regeneration/Conservation Award 2019.

The brief for GMA was to create a dynamic, modern and running distillery whilst also minimising the cost of building it and the operation.

The Urban Electric Company Headquarters building was selected to host the distillery and purchased in 2015. On the A7 close to the River Teviot, the stone workshop buildings are naturally top lit with big roof spans, and solid walls at low level proving ideal to house Stills.

A complete renovation of the building was undertaken, and part of the design ethic was to save as much of the existing building as possible and materials have been reused throughout the renovation. In addition, the distillery tours and visitors centre provide full disabled access, only one of the few to do so.

One of the goals within the brief was to have a bonded, secure distillery with heavy goods vehicle access next door and to be seamlessly integrated with a visitor centre that would attract and welcome tourists. A new sheltered entrance courtyard was formed between the distillery and the visitor’s centre. The entrance lobby was formed with glass walls that maintain the feel of the original outdoor courtyard. One of the existing windows has been dramatically elongated to provide views into the working heart of the distillery at low level, silhouetting the copper stills against the sky at high level.

A series of windows and arches provide views between the visitor centre and distillery and ensure that visitors to the building can orientate themselves. Having the visitor centre between the distillery and the River Teviot reminds visitors to the whisky tasting room of the source of water. The Stills can be seen by passing traffic and pedestrians on the A7, making it more impressive and attractive to visitors.

Borders offer scheduled tours where visitors can book and see how they make their Single Malt Scotch Whisky and Gin, and they also offer a VIP tour. They take visitors through the mashing, fermentation and distillation halls, and teach the design operation of the distillery.

Borders create a New Make Spirit every day; the majority of which sits in the oak casks as it matures into Single Malt Scotch Whisky. The rest of it is used as the base spirit to create William Kerr’s Border’s Gin, crafted entirely from malted Borders barely.

They have unique brands being made at the distillery, for example, William Kerrs Borders Gin is all about William Kerr, one of Scotland’s most renowned plant hunters, whose work contributed 283 new plants to the UK. Borders Gin celebrates Kerr’s great achievements and his contribution to botany, and using their own original spirit, the 43% great achievements ABV gin explores the art of distillation using their specially commissioned Carter Head Still to capture the essence of a delicate balance of botanicals.

Lower East Side, a smooth, easy drinking Blended Malt Scotch Whisky was inspired by the driving force of the Scottish Enlightenment- liberty (‘the freedom to do things your own way’).

Clan Fraser Blended Scotch Whisky is a blend of the finest grain and malt whiskies from the heart of Scotland. This was inspired by Borders overall vision to be firmly established in the Scottish Borders, and this whisky reflects the Spirit of the Borders whilst invoking warmth and belonging in the hearts of all who drink it.

To discover more about the world of Borders Distillery, head to: www.thebordersdistillery.com. 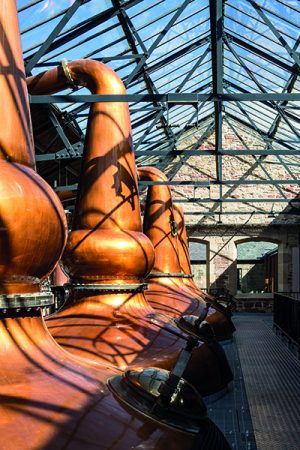