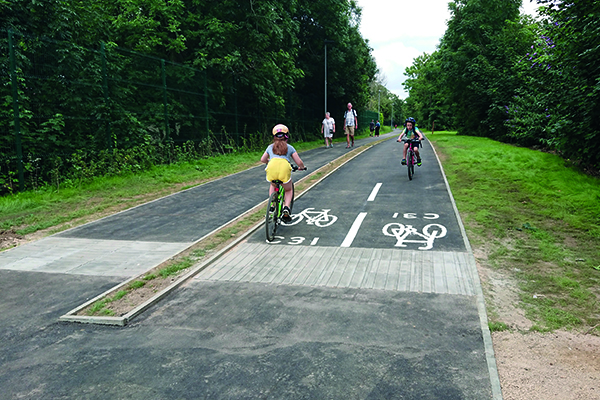 Hailed as a ‘valuable new community asset’ and opening up a new route on previously inaccessible land, a 1.2km walking and cycling path is just being completed between New Malden and Raynes Park in South West London.

The project, connecting Kingston-Upon Thames with Merton, was managed by the Go Cycle programme team at the Royal Borough of Kingston Council, with Kier as main contractors.

The new link opens up an entirely traffic-free path between New Malden Railway Station and Raynes Park Recreation Ground, where it will connect to new routes to Raynes Park and Wimbledon as part of Transport for London’s new Cycleways network.

The path is part of Kingston Council’s £30 million “mini-Holland” Go Cycle programme, funded by the Mayor of London.

Sustrans, the national charity which makes walking and cycling easier, have supported the council’s Go-Cycle team. Sustrans delivered the initial concept design, ecological surveys, resident engagement, stakeholder management, partner negotiations and public consultation for the scheme, which demonstrates the benefits that can be delivered through a collaborative design approach and vision.

The new path runs parallel to a railway line on land owned by Thames Water and passes under the A3 Kingston bypass, helping people walking and cycling to avoid busy and lengthy alternative routes and improving journey times between these areas.

As well as providing a new active travel link, the project has also created a space to access and enjoy the environment and wildlife in the area, with the local ecology and biodiversity being important considerations in the design of this project.

Bryn Lockwood, Neighbourhoods and Networks Programme Manager at Sustrans in London said: “This is a fantastic new route that makes journeys safer, faster and far more attractive for everyone walking and cycling and provides a completely new opportunity for travel. It also opens up an area of public space providing a ‘green corridor’ with natural habitats for badgers, bats and other wildlife, creating a valuable new community asset.

“We have been delighted to be working on this complex, multi-partner project with Kingston Council, Merton Council, Thames Water and Transport for London.”

Neil West, Project Manager at Kingston Council said: “The new walking and cycling link utilises land which was previously closed to the public. The route connects two areas of London which were previously difficult for everyone to walk and cycle between due to a number of very busy roads and a major dual carriageway.”

“It’s not often you have the opportunity to carry out a project which creates a brand new place for people – particularly in London where space just won’t allow it.

Matt Winfield, London Director for Sustrans said: “Often the hardest work in getting a new route built is the years of behind the scenes effort; feasibility studies, working with the community on the right solution, public consultations, designs, planning applications and committee meetings. Our team, including everyone involved in the design, community engagement and the ecologists is proud to have helped the Kingston Go-Cycle team to overcome those hurdles to make it easier for people to walk and cycle safely.”

Merton Cycling Campaign commented: “Cyclists and pedestrians can only welcome this worthwhile scheme. For cycling, it provides a valuable link to the improving cycling facilities of Kingston and gives Merton the opportunity to attract cycle traffic from Kingston, not only commuters but also shoppers and leisure cyclists.” 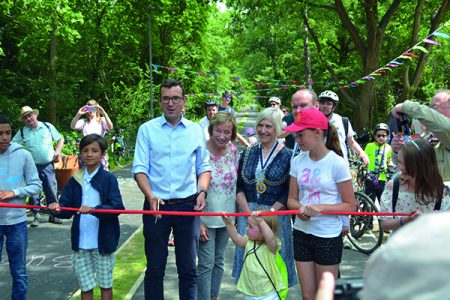 Richard Graves Associates specialises in providing trusted ecological advice to the development industry. Established in 2012, the company is particularly experienced with respect to protected species and projects of a complex nature.

Richard Graves Associates provides a full service, which can take your development from pre-option due diligence through to post development monitoring. It has been involved with over 150 projects to date, including five cycle route schemes in Greater London.

The company was recently involved with the new 1.2km walking and cycling path running from New Malden to Raynes Park. This included undertaking phase 1 habitat and protected species surveys, as well as assisting with the design of an acceptable lighting scheme for the route.

“Sustainable transport is something we are very keen to see, so it is enjoyable to work on a scheme like this and help to resolve and mitigate any potential conflicts with biodiversity.

“As a company we take pride in providing trusted ecological advice. We are happy to work on all types of projects and at any scale. We take particular pride in successfully completing more difficult and complex projects and seeing them through from site selection to completion.”