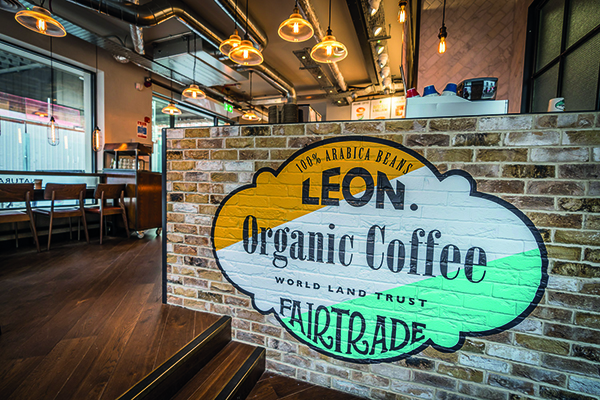 LEON is the healthiest fast food chain around right now. It presents the vision that you can have fast food that tastes good, and does your body good. With a constantly improving an accessible menu, LEON is catering to all dietary needs.

For example, the introduction of the LEON LOVe burger, launched in restaurants in January, has been one of its most successful dishes ever. The LOVe burger is made using a vegan patty and is available with the option of a gluten-free bun. It is currently the third biggest selling item on the LEON menu behind its LEON’s Baked Fries and Satay Chicken Hot Box.

LEON has been committed to a more varied plant-based menu since it opened in 2004, and as demand for vegetarian and vegan options continues to grow on the high street, the chain is continuing to cater to those needs. The percentage of plant-based dishes sold in restaurants has grown by 8.5% since 2016 half (53.1%), and now, in Q1 2019, 48% of the menu is vegetarian and 40% vegan. That’s up from 40% vegetarian and 28% vegan in the same period in 2016.

And now, LEON has moved across the pond to Ireland. Brian McIntyre, of Cibus Concepts, and in partnership with LEON, is part of LEON’S Irish franchise partnership. He told PREMIER HOSPTIALITY MAGAZINE about his interest in LEON:

“It was last summer when we started talking to LEON UK about taking the franchise to the Irish market. We met with the team from LEON at an event and struck up a conversation with them, as we really liked the LEON brand, the product and how the brand worked, and through a long period of discussion and back and forth with them, we signed up to have the license for the Irish market north and south. We started looking at sites in the latter half of last year, and earlier this year we negotiated a lease on a Temple Bar unit which is our first LEON and has just opened.”

“Realistically, the first number of sites will probably be in Dublin, and then we’ll expand out into the other major cities around the country. In terms of why we chose Temple Bar itself, it was about finding the right premises obviously, but it’s also great starting point for us. It’s a tourist population, and it’s got quite a strong student population close by, and it’s very central. So it had a bit of everything and it’s somewhere LEON would fit in culturally; so it was the right area for it.”

“The Temple Bar site is two floors; a ground floor and basement situated in a corner unit, previously it was a second hand clothes store in a very old part of Dublin. We looked at a lot of ways we could layout LEON, because we needed to get the customers in, as well as the kitchen. The main kitchen is on the ground floor and as it’s a corner unit, we’ve got an entrance on each street. Downstairs we got about an extra 30/40 seats in, so it’s a comfortable seating area, and we’ve got a secondary kitchen including a cold room, walk in freezer, team quarters for storage and team facilities.

“Being a city centre build limited access in terms of materials, deliveries, drop offs whilst the building itself was a twelve year old rebuild. They put in apartments above it and a lot of those facilities routed through to where we were putting LEON in, so we had to deal with them, and reroute anything like pipes or electrics that were in the way.