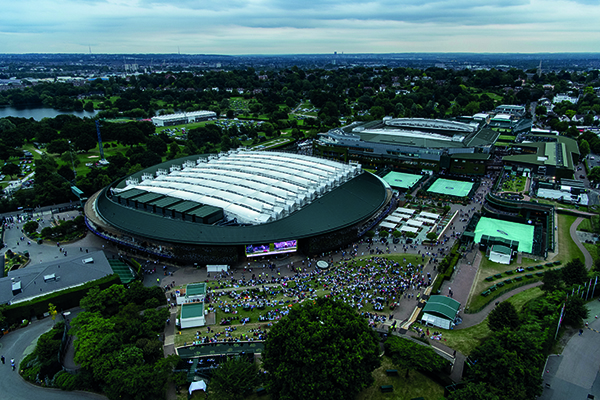 A major project to transform Wimbledon’s famous No. 1 Court has recently been completed on time and on budget, and includes new roofing, seating, refurbished hospitality suites and a host of other improvements.

To deliver a project of this magnitude, The All England Lawn Tennis Club (AELTC) appointed Sir Robert McAlpine as the lead contractor. Commencing in 2016, the No.1 Court Project has been a highly complex three-year build.

The project included the installation of a new fixed and retractable roof; the replacement of all seats inside the stadium for improved spectator comfort; 15 refurbished hospitality suites and various back-of-house areas; a two-level walled garden public plaza; and a living wall either side of the Big Screen facing Aorangi Terrace. The court now has an increased capacity of 12,345.

A central consideration of the No.1 Court redesign was to ensure that the right shape of roof opening was created to maximise the natural light levels on the court to support the growth of the grass, while also trying to give a curved feel to the stadium to reflect the historic circular design of the No.1 Court.

Sheffield-based engineering specialist SCX was at the heart of the design, planning and construction of the new roof. The design and planning took two years prior to when construction started three years ago. The project has seen more than 25 people employed to design and engineer the roof, plus 35 on-site in London to install and commission it.

The roof has 11 steel movable trusses – each 75 metres long and weighing 100 tonnes. Moving each of them onto the No.1 Court required a 600-tonne crawler crane, with 300 tonnes of counterweight.

The retractable roof requires 164 drives and 44 motors to move it and takes between 8-10 minutes to fully retract or deploy. It is 75m wide and 90m long when deployed.

The total roof area is 6,500m2 when deployed and 1,600m2 when retracted. 7500m2 of fabric was procured for the roof assembly, enough to cover 38 tennis courts. The fabric cover weighs four tonnes. 89,222 design and construction documents were produced throughout the life of the project and 333 truckloads of earth were removed from site, with 98% of construction waste being diverted from landfill for re-use.

More than 40 miles of scaffolding tubes were connected by 81,000 fittings and 80,000 man hours per month were required to complete the overall project.

The two new living walls on the side of No.1 Court, horizontally flanking the Big Screen on The Hill include 15 different plant varieties and take inspiration from physics imagery, reflecting the ‘movement’ of a wave pattern similar to a tennis ball being hit. 14,344 plants have been used in the walls. Each wall is 5m high, with the north-west (left) wall being 24m long, whilst the west (right) wall is 25m long.

Working with Chichester-based company Biotecture for 14 months, the walls were designed to fit with The Championships’ ‘tennis in an English garden’ feel. The original No.1 Court, located adjacent to Centre Court, was opened in 1924, with a seating capacity of 2,500 and standing room for approximately 750.

The new No.1 Court was opened by The Duke of Kent in 1997, with Tim Henman and Daniel Nestor playing the first match on the court at The Championships that year.

The All England Club launched the Wimbledon Master Plan in 2013, setting out the vision for the future of the Club, its grounds and facilities. A critical part of this plan called for a major renovation of No.1 Court.