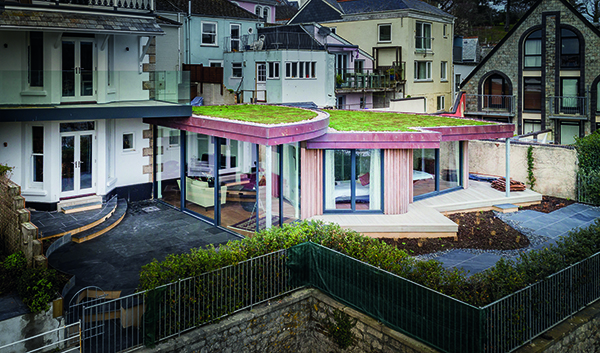 11 Esplanade was shortlisted and then highly commended as the Best Extension or Alteration to an Existing Home in the LABC South West Awards 2019.This unusual but striking modern design nestles into the centre of Fowey within the Conservation Area almost unnoticed. The hidden gem is not only exemplary in terms of design, but it has also been constructed with sustainability at the heart of the concept.

The brief from the client to ARCO2 concerned the remodelling of the lower two floors into an amazing, timeless apartment complemented by a stunning redesign of the garden.

The clients, Mr and Mrs Jeffery said: “We remain delighted and have enjoyed every single day of the process. We knew that getting the right design was fundamental to planning success and ARCO2 took on the challenge. Their brief was for a stunning, timeless and flowing redevelopment of our house and attached cabin. This they have achieved and our expectations have been exceeded. The planning journey was exciting. We wanted an honest and open approach to the planners and equally importantly our neighbours. Ian and I presented our case to the local planning committee and they responded by accepting our offer of a site meeting. Similarly our neighbours were invited to an open house to see our plans. There were no objections to the development and planning permission was granted.”

ARCO2 took its inspiration from the sails of yachts seen in Fowey Harbour just a few yards away. The proposed replacement building features a flat but segmented curved roof covered in living plants of sedum offering a greatly improved outlook from the neighbouring properties, whilst preserving their views of the Estuary. The fascias are clad in copper to minimise maintenance and once they begin to green they will blend with the living roof minimising visual impact. Timber cladding will weather to a muted silver grey, and conceal the new cabin when viewed from the harbour.

Generous roof overhangs shadow the glazing, further reducing the buildings visual impact and providing solar shading.  The existing Victorian building has been sensitively re-modelled and refurbished retaining the charm and character of the original building whilst also seamlessly flowing from old to new with a maritime feel. A sweeping glass and steel first floor balcony compliments the sail-like green roofs of the added extension and the minimal intervention approach respects the existing heritage but with a modern twist.

Due to site constraints and difficult access the construction method was carefully considered ensuring that beams and windows would be able to be delivered on a lorry into the centre of Fowey and also through a temporary path between the neighbouring chapel conversion. The replacement building was constructed using a glulam timber post and beam frame with breathable fabric consisting of I-joist walls, roof and floors insulated with reclaimed sheep wool, and high specification double glazed windows. The post and beam frame also enabled minimal excavation and reduced concrete via small pad foundations.

Although the new building is connected to the Victorian property without thermal separation, the decision was made to make the extension as airtight as possible by incorporating a services zone internally, providing the airtight layer which  helps to minimise heat loss and draughts. The external sheathing board was also taped to further reduce air infiltration.

As the timber frame construction extended through the winter and the site being located in an exposed coastal location, a tented structure was chosen to maintain efficiency, quality and keep the framework dry, which proved to be a huge success.

The existing cabin and hard surfaced garden offered little in the way of ecological benefit. However, the new buildings roof provides 92 sq.m of biodiverse green roof with 16+ varieties of sedum. Already birds, butterflies and bees have been taking advantage of the green roof. The garden has been designed to increase permeability and green areas with a minimum of 17 plant species and mature hedging, resulting in a net ecological and biodiversity gain. 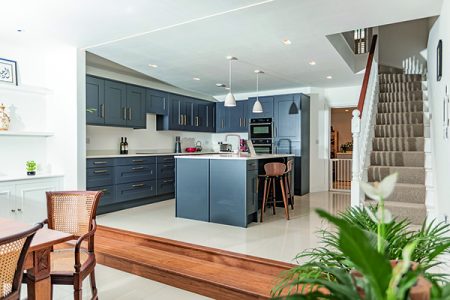