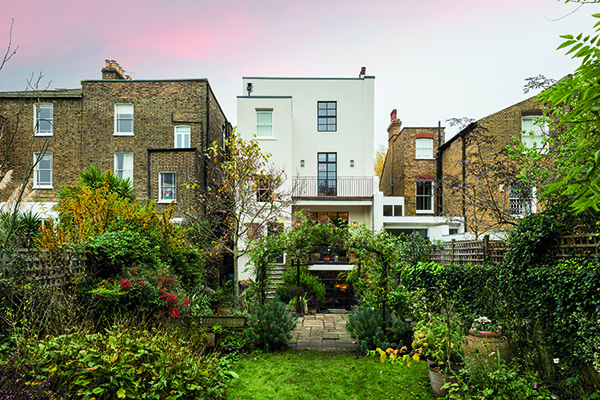 Sketch Architects is an approachable and enthusiastic design led architectural practice, based in London but working nationwide. They pride themselves on creating bespoke, well detailed buildings which respond sympathetically to the site in which they are located. Sketch Architects works on all aspects of the architectural process, including project management and interior design. They work on both new and existing buildings and believe that sustainability and an environmentally responsible approach goes hand in hand with good design and should be integral to every project.

Sketch Architects was founded by Neil Gaskin and Will Dewar in 2010 after they met studying architecture at the University of Nottingham. After spending a combined 14 years working for award winning architectural practices they combined forces to go it alone. 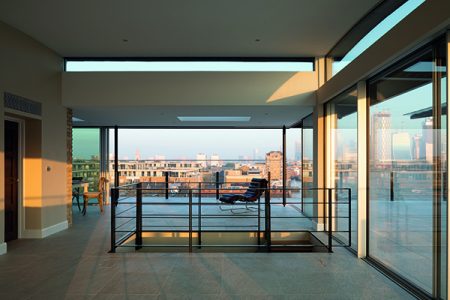 The clients approached Sketch Architects having just purchased a new penthouse apartment overlooking the River Thames in London. The property was configured over two floors and over the years the previous owner had purchased and combined several smaller flats to create this new, larger duplex apartment which was located over the sixth and seventh floor of this block. As a result, some of the spaces seemed disjointed.

The configuration did not take full advantage of external space and the client wanted to maximise the sense of connection with the roof terrace and the views beyond. The existing interior fit-out was also dated and as a result the clients asked Sketch to completely overhaul the existing property and consider new internal layouts and finishes that would better suit their requirements.

Given the location of the property on the 6th and 7th floor of a building, the construction process was extremely difficult to coordinate. Sketch Architects worked closely with the contractor, MM Crew, to bring all of the specialist sub-contractors together. On two occasions a large crane was utilised to remove and deliver the heavy material that was required for the build. The ‘day-to-day’ materials had to be either carried up the stairwell or brought up the lift to the property.

The new designs looked to maximise the views out to the river and beyond in all areas. As result the entry hallway, on the 6th floor, was opened up to create an instant connection with the living space on the south side of the building, so that when entering the property, there was an immediate visual connection with the surroundings. This was aided by adding new Vitrocsa glazing in all areas, with concealed frames that maximised the glass within the window openings. This large living space was fitted with a huge feature fireplace and bar area. A full height sliding wall was also introduced between the spaces to allow the living room to close down and become more intimate and cosy when required.

A new master bedroom suite, with luxurious en-suite bathroom and walk in wardrobes, was also created. On the top floor an original glass box which housed a gym area was removed and the living space extended to create a large new open-plan space. A new pavilion element was constructed, which wrapped the original structure to integrate the extension with the existing. 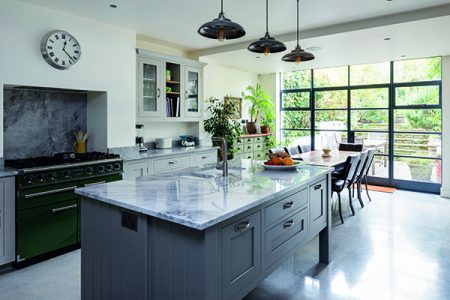 Living in a period property is never without its complications and after a decade of living there, the list of improvements and repair jobs was long, so the owners decided it was time to tackle them all at once.

The house was gutted and taken back to its shell; electrically rewired, pipes re-plumbed and the walls and floor strengthened where historic movement was visible. A new steel frame was added within to strengthen the original structures to ensure that once the new finishes were applied, similar movement issues wouldn’t be a problem in the future. All the exterior windows on the rear façade were upgraded – replacing the existing, poor quality, timber windows with new steel framed Crittall windows. All internal surfaces were renewed and the external rear façade was newly rendered to cover the years of previous neglect.

The basement kitchen, which had been extended in the past, was completely reworked. Given the kitchen was an area that was used more than any other, the client wanted this lower ground floor space to feel more open and inviting. Sketch Architects proposed opening up the whole floor, introducing a new structure at this level allowing for the removal of existing walls, original beams and columns from past works. This created a blank canvas that could then be zoned off to create the different areas that the clients required.

Upstairs, the couple’s bedroom suite now has the look of a lofty Parisian apartment. Once two smaller rooms, Sketch reclaimed space to create a dressing room leading off from the bedroom, which then leads to an adjoining bathroom. With the addition of new bespoke tall double doors and a freestanding bathtub in the dressing area, the already impressive proportions have been given a greater sense of drama.

The refurbished bathtub is positioned centrally in the new dressing room, acting as a focal point for the room. Fitted wardrobes, made by a local joiner, line the walls for a clutter-free look.

To find out more, visit: https://www.sketch-architects.co.uk/