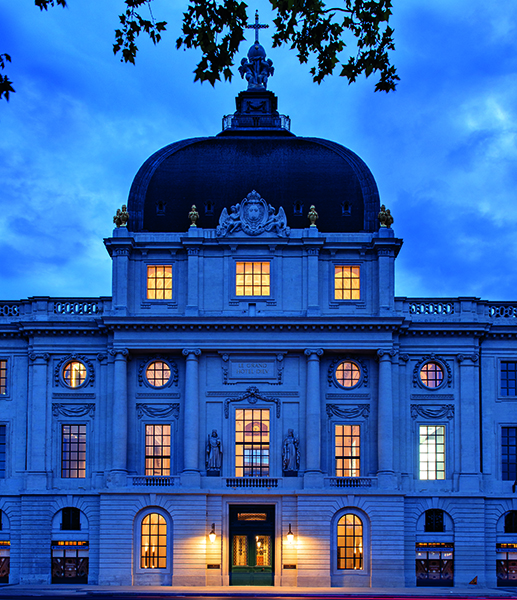 Monastic and Precious
The juxtaposition of these two ideas expressed the aim of the decorative concept for the Grand Hotel Dieu de Lyon.

The Grand Hotel Dieu is without a doubt one of the city’s most spectacular historic buildings. But while the external architecture is highly ornamental, historically the interior already expressed the dichotomy between architecture and function. Inside, the Great Dome displayed the same richness as the exterior, in contrast to the other much more sober spaces, with their stone floors, plastered walls and timber ceilings.

The decorative concept drew its inspiration from the same values; the contrast between simplicity and embellishment, between monastic and ornamentation illustrates this assumed duality in continuity with the architecture.  The ambition was to fit into the essence of the building going beyond stylistic effect. The project aimed to be contemporary, bearing its own identity, displaying humble and retained luxury, consistent with the history of this unique building.

The layout also makes it possible for visitors to walk around the building independent of hotel guests. Thus, the central space beneath the lantern is left open and the furniture is dimensioned so as not to interrupt the link of sight throughout the space.

The furnishings, benches and screens were specially designed for the project. The fabrics were chosen to fit with the dialogue between monastic and ornamentation, using Lyonnais silks from Verel de Belwal against plain canvases.

The large screens incorporate technical equipment such as heating and acoustics, but they also highlight and anchor the furniture to the scale of the building.

Made in backlit alabaster, the bar is like an ornamental object in dialogue with the soaring dome 32 metres above. 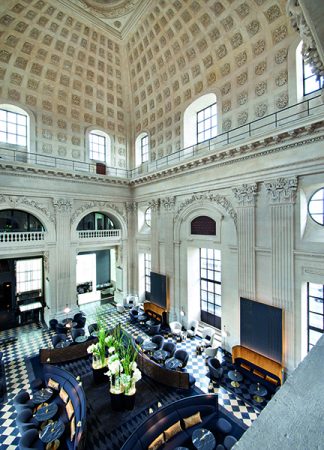 Lobby-Reception and Concierge
The reception and concierge desk are two similar spaces arranged symmetrically on the ground floor on either side of the entrance.

Local Villebois stone floors and limed timber beams are the common points that ensure unity between the two spaces, along with the original features of the building that have been restored to both the lobby and the concierge desk areas.

The new interventions stand in contrast to the historical details, again illustrating the play between the monastic and the ornamental. Black timber panelling is punctuated by gilt wall lights, visible from outside. The panelling also serves to conceal the new technical equipment: lifts, air conditioning and heating.

Through patterns in silk as well as specially designed rugs, the floral theme brings its touch of ornamentation to the project.

Running on from the concierge desk, the restaurant forms the same type of space. It follows the façade, with the same architectural finishes in-keeping with the historic building.

The new scheme picks up on the look of a contemporary brasserie with a long central banquette. Unlike the reception and concierge desk areas however, the restaurant spans the full width of the building and opens onto a courtyard/internal garden.

This factor inspired the fit-out of the space with lights of ceramic petals, as well as bouquets in metal. These decorative elements evoke the plant world of the court yards, which historically were medicinal gardens.

The most iconic bedrooms of the Grand Hotel Dieu de Lyon are undoubtedly the duplex rooms with a view of Rhone.

The decision to create these rooms on two levels came from the desire to respect the original height of the existing treatment rooms, thus avoiding having to split in two the windows of the main façade. One enters via the upper level into the sitting-room area with plunging views of the Rhone. On the lower level, the bedroom and bathroom are given generous use of space.

The colour range used for the chairs, rugs and fabrics, from blue to ocre, is inspired by the colours of stone used in the architecture of the building.

The timber flooring and plastered or painted walls echo the simplicity of the public spaces, where only the large decorative panels bring a note of ornamentation. These panels are made like a patchwork of printed mirrors and stretched silk. Treated as an original work, they reproduce an 18th century silk pattern. The dye was specially designed for the hotel by Verel de Delval, historic Lyonnais silk manufacturer.

The bathroom runs on from the bedroom, with walls in the same range of deep blues used elsewhere, contrasting with the tones of natural stone.  There is no tiling but only stone facing to protect the walls, always ensuring that the original architectural envelope is left to speak for itself.

The showers are lined in mosaics, a nod to the history of Lyon, where examples of this ancient art date back to Gallo-Roman times. Like the bedrooms, the circulation spaces also show a variety of different kinds of spaces. On several of the floors, the 18th century building’s original dressed stone pillars punctuate the corridors.