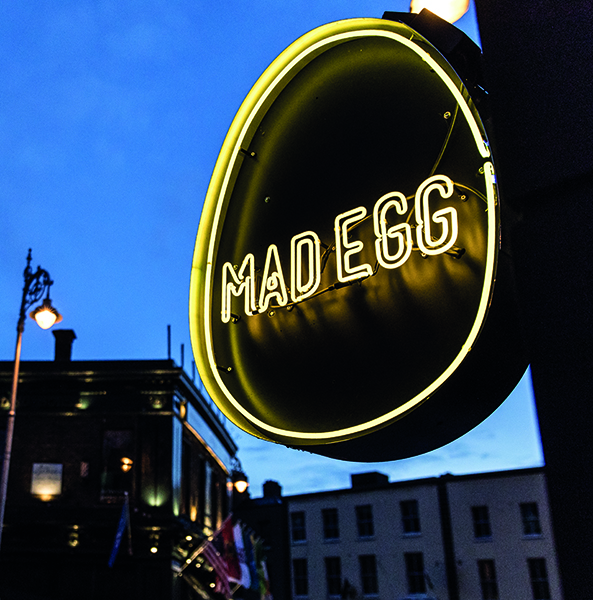 There are now three Mad Egg restaurants in Dublin. Its tagline ‘chicken done proper’ lives up to the test with the restaurants being all about Free Range Irish Fried Chicken.

Founded by Conor Sheridan and Stephen O’Reilly in March 2018, the brand has already proved a hit in Dublin with two city centre locations on Charlotte Way and Millennium Walk, and the newest location opened in August, in Dundrum.

Mad Egg only use free-range birds hatched locally in a family-run farm. They tea brine for 48 hours to make them tender and juicy and then double dredge the birds in spiked buttermilk and coat them in a house seasoned mix for that signature crunch. The end result is the best fried chicken in Ireland.

Conor Sheridan told PREMIER HOSPITALITY about how Mad Egg came to be:

“We started the concept about three and a half years ago and the reasoning behind it was we just didn’t think chicken, particularly fried chicken, and was done well in Ireland. It’s the most sold protein in the country but probably the worst prepared.

“So we wanted to elevate the offering in Ireland, we started by tracking down some of the best free range farmers in the country to see what was commercially viable. It snowballed from there. Dublin has gone on a bit of a boom opening new restaurants so it took us about a year and a half to get settled and set up shop and the reaction has been really positive so we kept going, and kept expanding.”

The Dundrum branch is the brand’s first shopping centre location and is set to serve the same signature dishes including their mouth-watering fried chicken sandwiches and DIY cheesecake. It is located in the Pembroke District, near the Pembroke Square development project, which is set to reinvigorate a currently underutilised part of the centre, creating a new hub for aspirational dining and leisure concepts at Dundrum.

“With the first venue we wanted to go with a simple enough design in terms of finishes but also something a bit funkier, a little different. We went for quite the industrial route- steel finishes, and timber and they played off each other. The first location we had to strip out because it was originally a hairdresser so we needed to change that into a working restaurant, but it already had an industrial look so we played off that a little bit and used some of the natural finishes like the brick work.

“We’ve made changes to each of our designs in each location; there are similar finishes, but just laying it out a little bit differently with different tweaks. However, one carry through we actually have are these lights from submarines, and we put them into every restaurant. It’s a simple enough design but funky enough for it to stand out.

“Dundrum is the biggest retail development in the country, like the equivalent to London’s Westfield, so there was a lot more obligations in terms of paperwork for the build process compared to renting off Joe Bloggs on the corner, it was more of a complex project- but as a testament to our team it went really smoothly. Which is really important pre-opening as you want to focus on getting an awesome team together and not on niggly building issues.

Dundrum is going through a big redevelopment project and they’re turning it more into an entertainment district, to make it a real destination. We are really excited to see what the future holds there”

To find out more about Mad Egg, please visit www.madegg.ie. 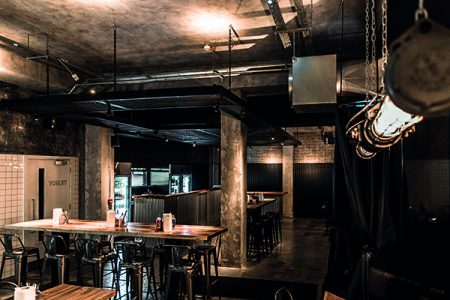 Total Fitout is a turnkey service provider with a passion for spatial planning and design. Their experienced team specialise in restaurant, residential, hotel, apartment complex and show house fit outs. This involves designing, procuring and delivering on project goals to the highest quality, on time and on budget for their clients.
The company has been operating since 201 and in that time the business and team have grown extensively. This is a testament to the decades of experience of the team across the design, furniture and building sectors, which allow Total Fitout the knowledge, resources and buying power to successfully and repeatedly deliver large fitouts with ease.

Some of Total Fitout’s most recent projects include working on a Student Accommodation in the Marino Institute of Education, Dublin, a residential turnkey fitout for a PRS in Carton Grove, Maynooth, Co. Kildare, a hotel turnkey fitout for the Atlas Hotel Group in their Holiday Inn Express hotels and a Restaurant fitout in Cavan for Barduccis Italian Restaurant.

Most recently Total Fitout completed work at Mad Egg and were engaged and appointed as the main Fit Out Contractor by Linesight to deliver a turnkey restaurant. They stripped back the front of house to shell and core, and with designs from Jill in L’Strange Designs brought this Mad Egg to life.

Commenting on working on the Mad Egg project, Total Fitout General Manager, Shea Woods said: “The Mad Egg brand is well known in Dublin and we were proud to be part of this very exciting project. Being part of Dundrum Town Centre there were many stakeholders and variables in this project that had to be closely managed as part of our project plan which had a very tight timeline with commencement to completion being just 20 days. Conor and Stephen dropped by daily and their relaxed, yet professional approach was an absolute joy to work with. We delivered their brand on time and on budget, but most importantly our fit out was to our client’s satisfaction and that meant a lot to us as a team.”

To find out more about Total Fitout, visit: www.totalfitout.com