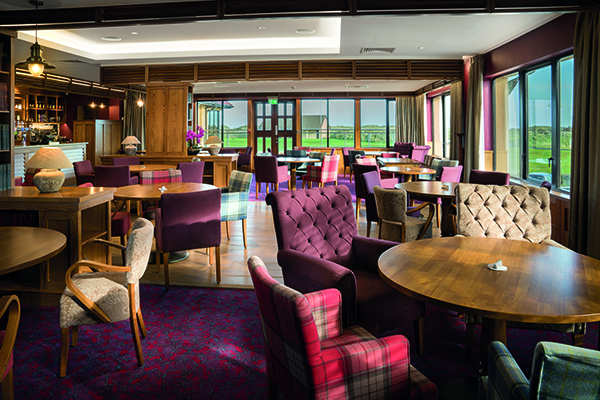 Montgomery Irwin Architecture and Design has led the major remodelling works to the clubhouse at Royal Portrush Golf Club, which hosted The Open 2019.

Royal Portrush Golf Club is home to one of the best and most challenging links golf courses in the world, the Dunluce Links, where the 148th Open Championship was staged from 14th July – 21st July 2019. The Open was first held at Portrush in 1951 where a crowd of 8,000 watched Max Faulkner claim in title. In 2019, with a score of 269, Shane Lowry was crowned champion winning the championship by six shots – the biggest margin of victory at the Open since Louis Oosthuizen triumphed by seven at St Andrews in 2010.

Transformation works at Royal Portrush in preparation for the tournament involved a combination of remodelling, renovation and interior fit-out to the Dining Room, bar areas, Club Shop, Junior Locker Room, Visiting Ladies Locker Room and toilet areas including circulation and back of house spaces.

The successful renovation of facilities at the clubhouse has been widely acclaimed by the membership and visitors alike, which is recognised with greater footfall and spend in the club shop and associated facilities.

PREMIER HOSPITLAITY MAGAZINE spoke to Alan Irwin from Montgomery Irwin Architecture and Design about the project in a bit more detail.

How did you come to be involved with this project?
“My partner, Graeme Montgomery and I, were involved with a previous major renovation project at the club when employed by another local architecture business. We set up Montgomery Irwin in 2006 and have carried out a number of private commissions for club members. We were therefore known to some of the decision makers in the club and were asked to provide a fee proposal for the project. We were delighted to be appointed.”

What was the brief you were given for the project?
“The project began late in 2014. The club initially wanted to improve the size of The Club Shop and provide better facilities to accommodate an anticipated increase in visitor numbers in the run up to The Open. The requirements of the brief had to be satisfied within the existing building footprint. The alterations to the Club Shop caused a series of other alterations to areas such as the Juvenile Changing Rooms and the Visiting Ladies Changing rooms. These works at ground floor were followed by four further phases which included the remodelling of the bar and hospitality areas upstairs, the dining room upstairs and more recently the toilet areas upstairs. We also worked on the male locker room facilities at ground floor.”

It sounds like you have a certain amount of creative freedom when you work with them?
“Yes definitely. It is a real pleasure to work with the club. In my experience, they tend to have a good committee structure and the Secretary Manager is on top of things. This is a big help to us when we are trying to get work done. They are used to having work carried out so they realise that there will be disruption. The Club Committees tend to be very able and capable of making decisions when they have to be made and this keeps things moving. They also bring good ideas to the table yet will listen to what we suggest. Overall it has been a very enjoyable process working with RPGC.”

In terms of the hospitality side of things, how would you describe the look?
“The club wanted a design scheme to provide a sense of tradition. The previous renovation had delivered a top quality exterior and the interior fit out needed to compliment this image for one of the best golf clubs in the world.”

What would you say are some of the challenges when working on a place like this?
“It is all about timescale, programme and the supply of information. Also when you are working with a committee, everything has to go through a cycle of committee meetings so you have to have information ready to meet the committee at fixed times that may be out of sync with a more conventional contract.”

How important was it for you to be involved with this project?
“It was a real honour to be able to work with RPGC at such a special time. I am not a golfer but I know a lot of people who are members of the club and it is certainly part of the fabric of the area. With what was achieved at The Open and the run up to it, I think it has been a great thing for Northern Ireland and the island of Ireland.” 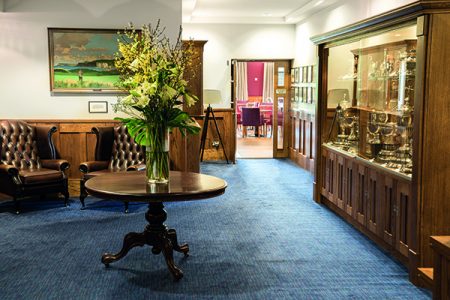 As one of Northern Ireland’s most prestigious specialist joinery firms, the company has worked on a number of high-profile projects including Stormont Castle, Hillsborough Castle and Gardens and the Titanic Hotel Belfast.

Recently, the company was involved with refurbishment works at Royal Portrush Golf Club. Significantly, this included creating a bespoke trophy cabinet to display the Claret Jug won by Portrush member Darren Clarke at the 2011 Open Championship. The project also encompassed wall panelling, radiator covers and the bar fit out.

“Our motto is ‘your vision, our passion’ and we’re very passionate about what we do. We’re good at what we do and have a fantastic team of skilled individuals. We love to get directly involved with every project.”