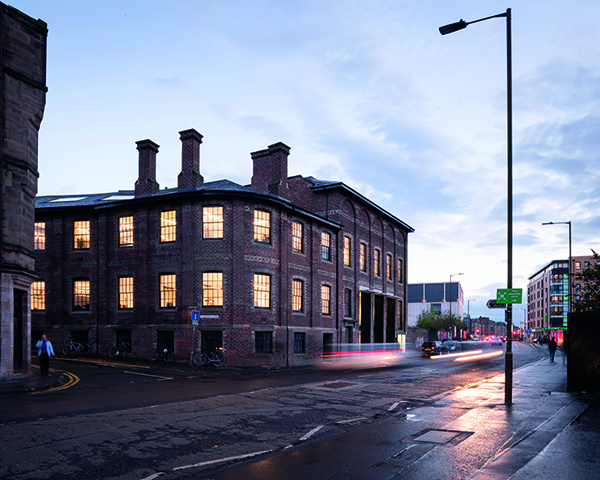 The Edinburgh Printmakers Creative Hub is located within the former headquarters of the North British Rubber Company (NBRC). The project involved the redevelopment of this derelict building into a multi-use arts complex centred around printmaking production.

Central to the architectural concept was to make precise interventions to facilitate new use while respecting the character and story of the existing building.

An ambitious brief was developed for the new Creative Hub as Edinburgh Printmakers were keen to capture all of the characteristics of their successful former facility at Union Street, but also wanted to expand their business to create a more inclusive facility for the production and display of art.

Work on the project was undertaken by Page\Park Architects and Interserve Construction. The project initially began in 2014 and completed in April 2019.

Suzy O’Leary from Page\Park Architects told PREMIER CONSTRUCTION MAGAZINE: “The Printmakers had developed an outline brief greatly expanding their offer so we worked with them closely to develop the detail over a series of briefing workshops to create a bespoke architectural response for their unique organisation.”

New architectural elements are light of touch and stem from an understanding of the heritage. The bold new entrance onto Dundee Street provides a public face for Edinburgh Printmakers, offering views from the street directly into the galleries, reception and shop.

The new extension to the rear subtly shifts the heart of the building to create a central courtyard in which all building users can meet and interact. The print studio sits at first floor in the triple-height- former fitting and turning workshop. The approach taken by Page\Park Architects was not to whitewash the many stories of the space, but instead to allow a new layer of occupation that adds to its ongoing narrative.

Suzy added: “It was important to us to maintain the character and industrial quality of the original architecture but at the same time, we wanted to create a contemporary space for twenty first century printmaking. Key to the project was understanding this balance.”

The Edinburgh Printmakers Creative Hub includes eight creative industry studios, along with an artist residence flat, which provides rentable space for a diverse range of tenants.

The interior design for the project was led by the Page\Park Architects in-house team and focused on the development of the new reception/shop area as well as the café/bar.

A detailed analysis was carried out of the existing shop facility, reviewing and analysing the operational requirements of the existing reception and shop, whilst being mindful of the Printmakers aspirations moving forward. Through looking at three identified visitor roles – exhibition visitor, shop and commercial buyer – flow diagrams for each scenario were mapped out to help the team understand how Edinburgh Printmakers operates and how the purchasing process for each visitor functions. Following on from this, a bespoke interior solution was developed incorporating print browsers, a curatable display wall, display shelving and a multi-functional reception desk/till point to create the high quality, shopping experience desired.

In the café/bar the team looked to maintain the industrial character of the original building and re-use salvaged materials where possible. Glazed bricks discovered behind layers of plasterboard in the old basement partitions were re-used to create the new servery counter. Timber doors, formally of the fitting and running workshops, were re-modelled into bespoke café tables.

“Feedback has been really good so far and everyone seems to be buzzing about it,” said Suzy. “There have also been some great reviews about the accessibility of the building. The site is fully accessible, which is unusual for a historic building like this as it is on several different levels, so we worked with them to make it is suitable for everybody to access.

“It has been an amazing project for us to be involved with. The Printmakers are an incredible bunch of people; they are a charity and it is an artist run open access workshop space so they had this wonderful ambition to embed themselves in the community and revive this heritage building and it has been really inspiring for us.”