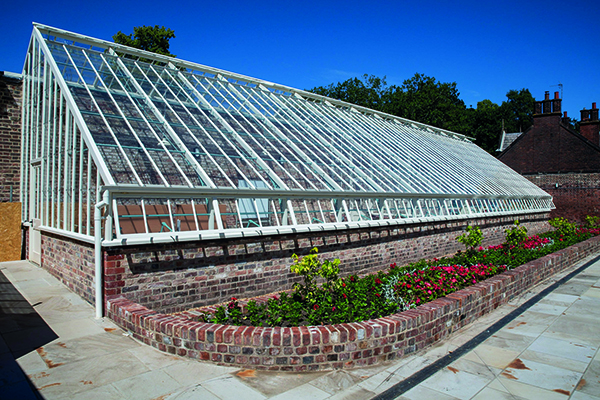 The project of restoring the conservatory range at Walton Hall celebrates the heritage of the estate and bestows a wealth of new opportunities through the restoration, establishing a hub of learning, engagement and enterprise. It ensures lasting and sustainable benefits to the heritage of the estate and for local communities; creating opportunities for people to gain new skills and experiences, improve health and wellbeing, make social connections and contribute to a success story of rejuvenation, inclusiveness and innovation.

Walton Hall and Gardens, situated in south Warrington, is often referred to as the jewel in the borough’s crown. A popular attraction visited by 200,000 people every year from inside and outside the borough, it is regarded as one of the top outdoor leisure destinations in Warrington. Its journey to becoming of one of Warrington’s green treasures began in the 19th century with Walton Estate owners Lord and Lady Daresbury and their passion for agriculture and gardening. They envisaged Walton Hall as a “Kew Gardens of the North” and between 1890 and 1930 they transformed the estate’s gardens.

Now it is owned and operated by Warrington Borough Council and the site is steeped in history, not least the grand setting of Walton Hall, which stands proudly at its heart. It is also home to Lady Daresbury’s formal gardens, the old riding school, the heritage yard, and even a children’s zoo.

It is in this climate that Warrington Borough Council drove forward its plans for the continuing development of the Walton Estate, improving the range of facilities for residents and visitors, restoring its historic assets and ensuring it remains a valued local resource for future generations.

In more detail, the Conservatory Range project aimed to restore and revitalise the existing conservatory, glasshouses and shippon. Here it provided innovative teaching and training for young adults and people with disabilities, resulting in a range of pathways to increased wellbeing, work readiness, entrepreneurship and employment. It provided significantly enhanced opportunities for engagement with the estate’s heritage, as well as improvements to its ongoing management, conservation and recording. Furthermore, the project also strengthened and diversified the existing volunteer programme, and transformed the estate’s value as a community resource, delivering increased public participation.

Led by Warrington Borough Council, the project formed a sustainable partnership with Myerscough College and Walton Lea to deliver apprenticeships, qualifications and opportunities for social enterprise. This collaboration also lead to the development of other areas of the estate, such as the historic formal gardens, conservatory planting and zoo, all of which  further increases public participation and learning.

The conservatory range was closed to the public in September 1993 and for almost 25 years the buildings fell into disrepair. The buildings remained standing due to temporary supporting beams and maintenance from the estate’s rangers and volunteers from The Friends of Walton Estate. The planning for the restoration of the glasshouses was years in development. However in 2016, thanks to The Heritage Lottery Fund, Walton Hall was able to employ a team of heritage specialists to design the restoration works.

Contractors Rosslee Construction were selected following a long procurement process and began work on site in April 2018. Their expertise was vital in ensuring the restoration works were sensitive to the heritage value of the site.  They brought on specialist subcontractors for areas such as stonework and joinery, to ensure the highest quality standards. Walton Estate is Grade II Listed, so the scheme required Listed Building consent in addition to planning approval. The conservatory range contains thousands of pieces of slender and elegant timber. During construction each piece of timber was removed, then tagged to mark its original location and assessed for rot. To ensure the site remained structurally safe the original timber that was in a good condition was used internally and new timber used for the external, structurally significant beams.

The conservatory range’s brickwork was generally in very good condition, with more than 90% of the bricks on site today originally dating from 1899-1910. The walls were dismantled brick by brick, cleaned, assessed for damage and rebuilt. The original lime mortar was analysed and a similar lime mortar used, to allow any moisture to leave the walls through the mortar rather than damaging the bricks. Almost all of the original ironwork was repaired and reused. Through paint testing the ironwork, a number of paint colours were found. One of the most prominent colours, a powder blue, was chosen for the restoration. The new ironwork has been cast to match the original.

It was the tireless encouragement of the Friends of Walton Estate that was a key catalyst for the conservatories’ rejuvenation. In 2012, Warrington Borough Council agreed to take on the development of the project to restore and revitalise the existing conservatory, glasshouses and shippon. In 2017, the project received its landmark moment, with the confirmation of £2m grant funding from The National Lottery Heritage Fund to restore the conservatory range, along with additional funding until 2022 to engage the public and volunteers in the heritage story. 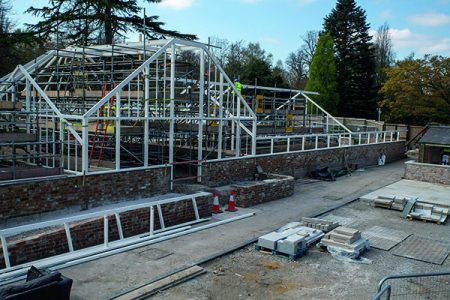