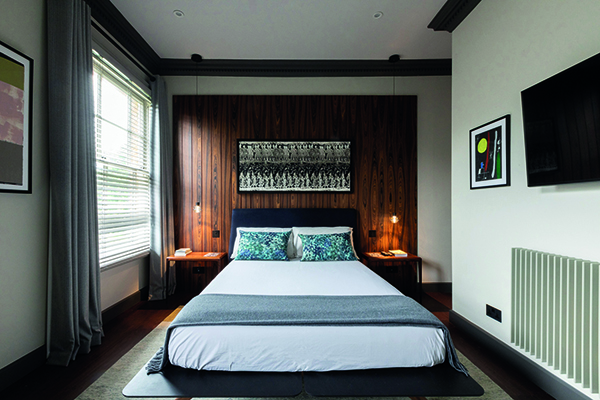 Shortlisted in the 2019 SBID Awards in the category of ‘Residential Apartment Under £1M,’ this home has been designed for a gentleman who loves the 1950s and 1960s. The idea of creating a constant visual stimulation when moving from room to room was very important, not just because it would create dynamism (which in itself is appealing) but because it would make the apartment look and feel bigger.

This was achieved without sacrificing the visual and functional flow thanks to the care and time invested choosing the furniture and designing the bespoke pieces. The use of Rosewood and dark woods in the rooms and the sourcing of vintage pieces and lighting add charm to the flat, placing it in the period desired by the client.

A contemporary touch was added by materials such as the wallpaper and the table lamps, which have that interesting duality between retro and contemporary. Finally, the art and accessories were chosen for reinforcing the general look and interests of the owner.

How did you get involved with this project?
“I was contacted by the client. We had a first meeting in his flat for discussing his brief and ideas. I presented the proposal, days later my practice was chosen.”

Were you given a brief of what the client wanted?
“Yes, the client wanted to have an apartment that reflected his interests in mid-1950s design, with a relaxed and masculine feel. Making the flat look bigger was an important aspect to be considered.”

How long were you working on the project for?
“In total, including building work, it was six-seven months.”

What are some of the stand out features in the newly designed space?
“The flow when moving from one space to the next, the progression of what is seen and felt when doing it is certainly one of them. The other features that stand out for me is the rosewood mural in the bedroom, the selection of vintage pieces and art.”

In terms of the furniture choices, what was your thinking behind those pieces?
“There were three points that I wanted to achieve. Number one was choosing furniture with the right proportions. With a challenging space, you have to be very aware of the proportions of the furniture because they still have to feel generous and comfortable. Number two was the style (50’s) and number three was bespoke pieces which helped tremendously to make the flat look bigger, more functional and with a unique aesthetic.”

What does it mean to receive an SBID Award nomination?
“I think that for any designer, it is very special because your work is being recognised by a set of professionals (the jury) who found and saw in your project  a consistent and strong aesthetic proposal that balanced: client’s brief, designer’s vision, understanding of the floor plan layout and understanding of materials, furniture and finishes.

“I believe there are 48 countries competing for the SBID Awards this year so that alone is recognition of the skills and consistency that I felt that this project achieved for the client. If I go on to win the award then that would be another level of recognition to my practice.” 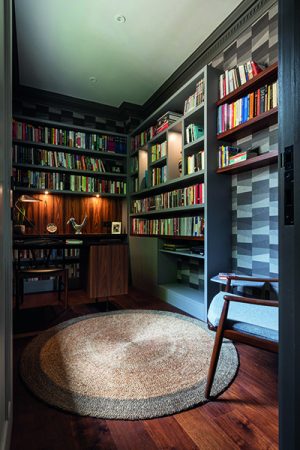