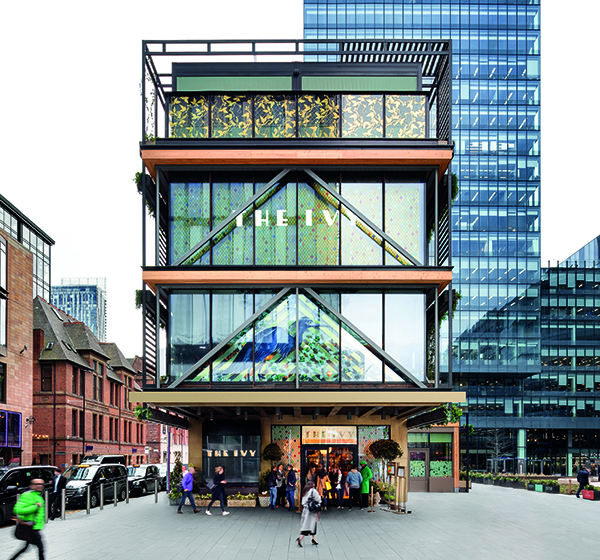 The pavilion building that now sits in the heart of Hardman Square, Spinningfields, Manchester, is home to the restaurant, The Ivy. It is on the shortlist for the Wood Awards 2019, and Sheppard Robson completed the timber-framed pavilion and public space for client Allied London.

The four-storey retail pavilion has been designed to be a permanent venue for a high-end food and drink offering, whilst the public realm (also designed by Sheppard Robson) creates a complementary garden space, called The Field. The brief was for a permanent structure that would redefine Hardman Square, moving it away from the large-lawn, big-screen events and transient pop-up bars that have dominated the past decade.

The 1300-square-metre building comprises four floors, including a roof terrace and two cantilevers at either side. The landscape proposal begins with working with the existing semi-mature trees and the positioning of a kiosk and a larger barn structure, both made from timber. The Field edges are then defined by structural planting and hard features, like benches, which frame the electric planting of the meadow-like greenery.

The Pavilion provides a permanent venue for The Ivy, while The Field serves as complementary garden space that draws its inspiration from a local historic narrative. Central to the project was the relationship between the building and landscape. The strongly gridded form of the pavilion’s expressed frame firmly anchors the structure to its commercial office context. The timber structure also provides visual relief from its steel and aluminium neighbours surrounding it. In further contrast, the free-form landscaping softens and makes the building seem more natural through entwined planting schemes on its external walls.

Planters on each floor ledge, patterned with motifs repeated in the landscaping features, extend a fragmented wall of planting up to the enclosed roof terrace. The latter is crowned with an over-sailing array of trellises, trees and canopies.

“We were after a building that was different from the rest of Spinningfields and acted as a natural counterpoint to the glass and metal used on the adjacent blocks”, said Neal Allen-Burt, partner at Sheppard Robson. He continued:
“The structure’s green skin underlines both physical and visual connections between the landscape and the building. Greened facades, including that of the roof, link views from both the low and elevated positions. Both those using the building, or the public space are intrinsically connected not mutually excluded; a definite case of always being able to ‘see the wood for the trees’.” 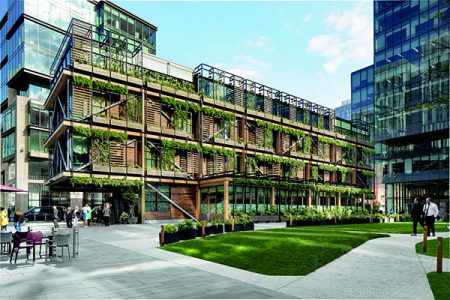